Dining on a Dime: Thai@Home Food Truck in Middlebury Specializes in Locals’ Favorites 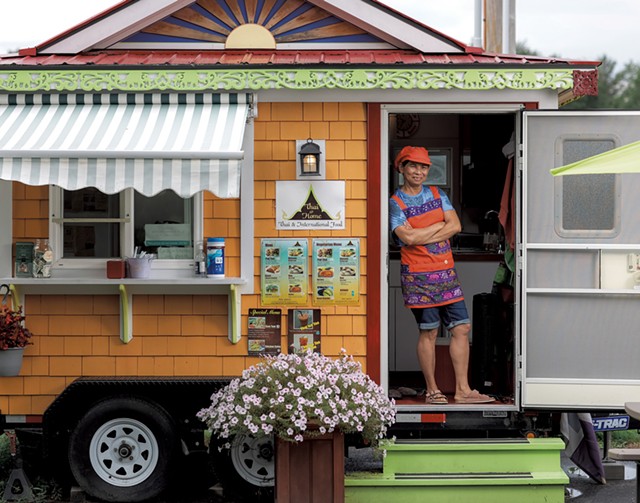 But now they hang out in the parking lot, where Filan operates her food truck, Thai@Home. Lavigne and three other friends Filan met in class buy lunch at the truck every Tuesday.

They were just finishing their meal when I arrived on a humid summer afternoon. I asked for their menu recommendations, and Lavigne suggested the red curry or pad Thai, along with dim sum (Thai dumplings), which she thinks "feel healthier."

Filan had run out of red curry, so my decision was easy. I opted for tofu pad Thai ($9) and one tofu dim sum ($1.75). I'm a vegetarian, so I brought along a meat-eating friend to sample some of the carnivore-pleasing options — chicken pad Thai ($9) and the chicken gyoza (Japanese dumplings — $1.75). 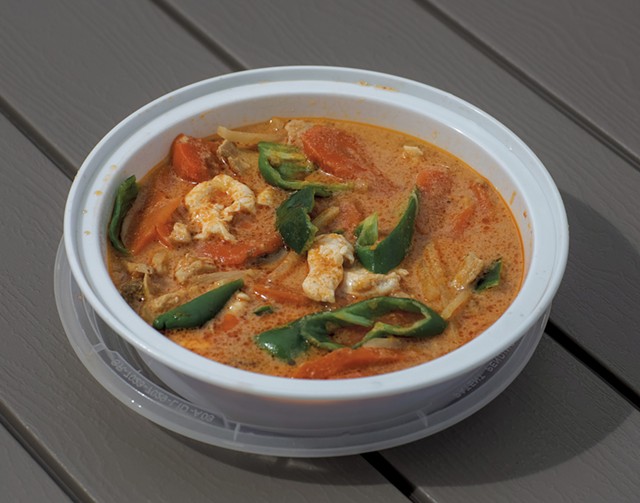 Filan's menu is relatively small — three appetizers, three entrées and one dessert — for good reason. Filan, also known as Chef Hasna, got her start as a chef selling food at the weekly Middlebury Farmers Market. Her menu was more expansive back then, but by the time she opened her food truck in August 2015, she had figured out which dishes people actually ordered.

"I [originally] put too many items, and they did not sell well," Filan told Seven Days. "People here eat the same things," she added with a laugh.

Filan's current approach seems to be working: She had a steady stream of customers during the hour we were there. Many of them work nearby and take their food back to work, so she packages all orders in disposable containers.

We opted to stay and eat at the shaded table Filan provides next to the truck.

With vegetables and a liberal amount of tofu (or chicken), the pad Thai was flavorful and filling, and crushed peanuts on top added a satisfying crunch. The portion was generous — enough to provide a leftover snack.

The gyoza and dim sum lived up to expectations. They tasted light and fresh, just as Lavigne had described them. Filan offers six gyozas or dim sum for $10, an ideal shareable appetizer.

Filan makes all of the menu items herself. Some things, such as the dim sum and gyoza, she prepares each morning so she can just heat them up during the lunch rush. The red and green curries and the pad Thai are made to order.

Born in the city of Rayong on Thailand's southern coast, Filan grew up cooking for her family and neighbors with her mother. "Now when I cook, I still hear [in my head] how she taught me to do this or how to do that," Filan said.

She met her husband, John Filan, on a trip to Vermont in 2010 and moved here shortly thereafter. A builder by trade, John built the orange-and-green Thai@Home truck with help from his wife. Modeled after a traditional Thai temple, it is bright and inviting, with an intricate roofline featuring carved elephants and a rising sun, which represents inspiration. The decoration at the very top, found on many buildings in northern Thailand, means "good luck, good health and prosperity," John said.

Thai@Home is open for lunch from 11 a.m. to 2 p.m. Monday through Friday during the warm weather months — typically April through October, Wanna Phasuk Filan said. Those who can't get enough of her cooking can find four of her menu items — pad Thai, fried rice, dim sum and red curry — at the Middlebury Natural Foods Co-op year-round.

The original print version of this article was headlined "Working Out"