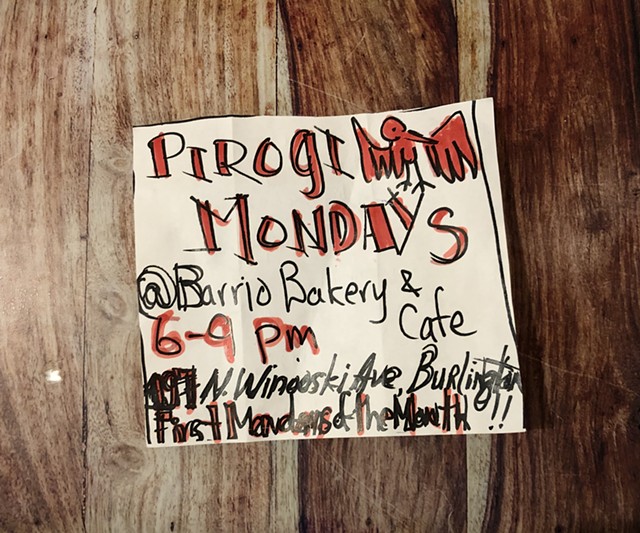 The best story pitch I've ever gotten might be the hand-drawn invitation that arrived on my desk from Miranda Syp. A note on the back read, "Hello! My name is Miranda Syp of Syp Brand Pierogi, LLC. I'd like to invite you to my next Pierogi Monday."

I'm a sucker for pop-ups and for pierogi, so this one was a no-brainer. As a bonus, these pierogi prices align quite nicely with the parameters of Dining on a Dime.

Syp has been making her "little pockets of love" since 2009, when she was living in Barre and received a grant from the Central Vermont Community Action Council. Working out of the L.A.C.E. community kitchen, Syp made pierogi for pop-up dinners and sold them wholesale and at farmers markets. When she moved to Burlington, Syp continued the business by popping up at the now closed Cobblestone Deli and Café on Battery Street in 2012.

Now, pierogi lovers can find Syp at Barrio Bakery.  Since June, she has been taking over the café on the first Monday of the month — serving potato-cheddar pierogi in place of pastries and cold brew.

At the pop-up, a plate of six pierogi is $9, and a plate with salad is $12. Both options come piled with sour cream, onions and Pitchfork Farm & Pickle sauerkraut.  The salad is dressed with a bright, tangy vinaigrette, which Syp said is an homage to her childhood visits to her Polish grandmother in France.

"My grandmother was a potato farmer in Poland, but she moved to France before the war because of a potato famine," said Syp. "The plate I serve is sort of a French-American-Polish fusion, which really represents who I am."

The pierogi are filled with potato and  Vermont cheddar, instead of the farmers' cheese that Syp's grandmother would have used. More than just fitting into Syp's geographic life story, the sharpness of the cheddar is a perfect complement to the sweetness of the onions and the sour zing from the sauerkraut that tops them.

The salad is worth the extra $3, both to contrast the heartiness of the pierogi and to really understand Syp's culinary point of view. With both on the plate, it's a filling — and delightful — dinner. 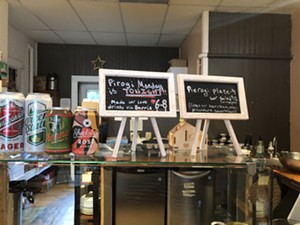 People seemed to agree, as there was a steady line all night and Syp had sold out fully by 7:45 p.m. "I felt like I had to educate people about pierogi when I started, but people know about them now," she said.

Syp is looking forward to increasing her pop-up nights at Barrio to include both the first and the third Mondays of the month, from 6 to 8 p.m. starting in October.

Beyond that, she wants to keep things small and stick with pop-ups. A conversation with a customer at the most recent pop-up reinforced her focus on bringing people from the neighborhood together.

The customer mentioned the Polish "bar mleczny," or "milk bars."  These cafeterias are subsidized by the state, offering low-priced menu items that draw in people from every social category for an egalitarian, affordable meal. Now that's dining on a dime.