Dining on a Dime: Soupie Sales in Shelburne 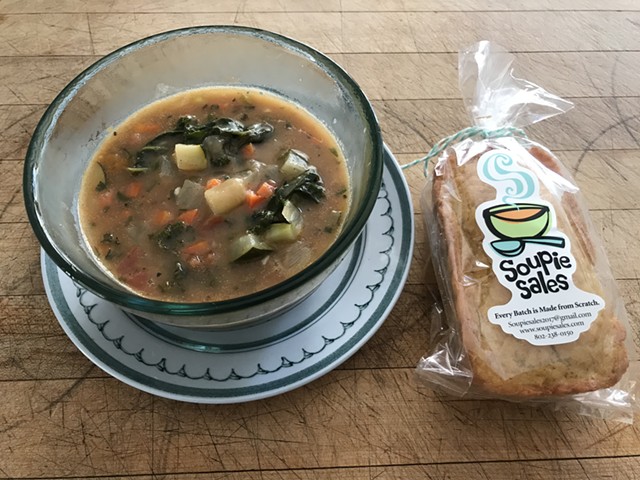 In her first year of retirement from her career as an art teacher, Kathleen Grant had an idea for one more creative project. This one wasn’t designed for children at Shelburne Community School, where Kathleen taught for 27 years. Instead, the project was conceived for her husband, Doug Grant. All she had to do was convince him it was a good idea.

Kathleen’s plan was for her chef-husband to start a little soup business out of their Shelburne home. She is a devoted fan of his cooking who turned on a new crowd to his soup last year when she brought Doug's corn chowder to a school function.

“People were like, ‘Oh my God, whose soup is this?’ ‘’ Kathleen recalled. “This is so amazing! They were fighting over the crock pot: Who’s going to have the last bowl?"

She told Doug: “You’re pretty talented. Let’s give it a shot and see where it takes us.”

Doug is a 1985 graduate of New England Culinary Institute who for 24 years was chef at the Lake Mansfield Trout Club in Stowe. The club serves three meals a day and Doug focused on dinner, making multi-course meals for club members who fish and hike during the day.  He left that job last fall, which gave him time over the winter to try out a soup business. He got his catering license in February.

Thus was born Soupie Sales in a Shelburne kitchen, where Doug makes his own meat and veggie stocks and prepares a few different soups each week. (The name, by the way, is a reference to the late Detroit slapstick comedian, Soupy Sales, who hosted a children's TV variety show called "Lunch With Soupie Sales" and a nighttime jazz show, "Soup's On," in the 1950s.) The soups are for sale through online orders with weekly pickups at the couple's home Wednesdays and Thursdays from 3 to 6 p.m.

We’ve had a meal of Doug's wonderful beef stew flavored with dark beer, garlic and pepper,  a St. Patrick's Day special. And we've enjoyed minestrone soup thick with vegetables and served with a mini-loaf of  cornbread baked by Kathleen.

The soups range in price from $10 to $14 per quart  — beef stew with Irish soda bread was $15 —  and can serve two people (or more) at a meal, depending on serving size. Asked to identify the key to making good soup, Doug replied: “I would just say care about what you’re doing. That’s the main thing with anything.”