Last week's autumn chill triggered my annual rewatch of When Harry Met Sally... As usual, Nora Ephron's 1989 film had me itching to don a chunky turtleneck sweater and cause a scene at Katz's Delicatessen.

But I didn't have time for a New York City road trip, nor did I feel like spending $26, the current price of the Lower East Side deli's legendary pastrami sandwich. Instead, I stuck close to home and headed to Addison Four Corners Store for lunch. The 10-minute drive from Vergennes to the intersection of Routes 22A and 17 in Addison is a much quicker — and more affordable — way to embrace the phenomenon now known as "Meg Ryan fall."

Owners Herb and Terry Glidden bought Addison Four Corners Store in 2001, and they've made sure the nearly 200-year-old shop has everything a general store should: groceries, greeting cards, good beer, clothes and coffee. They've got a candy counter full of chocolates crafted in-house by Chelsea Kennett, analog gas pumps and maple syrup-infused breakfast sandwiches that sell out by 9 a.m. most days.

The store also has a top-notch deli, where made-to-order sandwiches are stuffed with piles of meat smoked on-site. Most go for just $9.99.

Herb started cold-smoking pepperoni and Vermont cheddar in the store's parking lot 20 years ago, using a wooden structure easily confused with an outhouse. For the past decade, he's churned out weekly batches of barbecue — including brisket, pork and chicken — smoked with a blend of hickory and cherrywood in a rotisserie-style Cadillac Cooker, as long as the outdoor temperature's above freezing.

"We just wanted to do something different, to offer something not offered around here," Herb said.

Herb's son Joe Glidden said his dad has spent years traveling around New England scoping out other shops and finding ideas to incorporate into the family's business. Joe recently moved back to Vermont after 18 years in Chicago, San Diego and San Francisco. He's saving up to buy Addison Four Corners Store from his parents.

"We try to keep it really honest for all the locals but also cater to the tourists driving over the bridge from New York," Joe said.

If I hadn't already been on my way to the store for lunch, the smell of smoke sneaking through my cracked car windows would have lured me in, just as it did the first time I stopped, this summer. Since that visit, my go-to order at Addison Four Corners Store has been the same one I get at Katz's: chicken salad on rye. In both places, the chicken salad is a sleeper hit compared to its more popular brisket-based brethren. 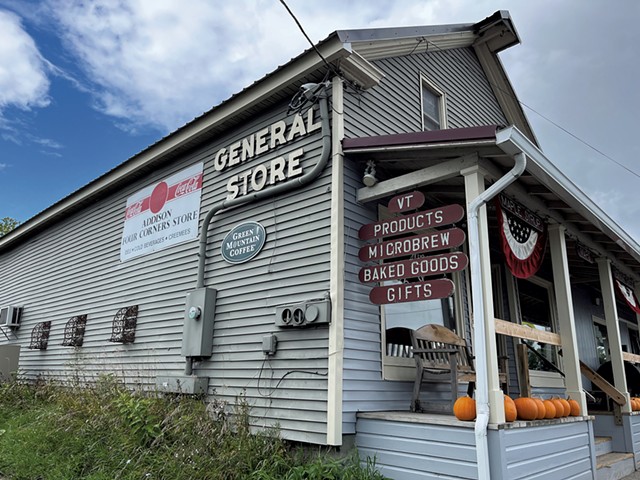 The Addison store's classic Americano chicken salad sandwich balances its tender, smoke-infused meat with crunchy chunks of red onion and celery, using just enough mayo to hold it all together between slices of soft, deli-style rye.

I wanted to dive into it right there in the parking lot, smokers in full view. But it's a substantial, sit-at-a-table kind of sandwich. I drove home, snacking on one of Herb's outstanding miniature cider doughnuts ($9 per pound) and blaring Harry Connick Jr. It doesn't get much more Meg Ryan fall than that.