Dining on a Dime: Pizzeria Verità

If you can't get to Florida for spring break, catch a mini wave of the Sunshine State in Burlington at Pizzeria Verità. The downtown eatery is offering a little in-house Margaritaville — two Margherita pizzas for the price of one ($13) on Mondays in the winter.

Officially, this deal comes to a close March 19 with the season's end (according to the calendar). But Pizzeria Verità co-owner John Rao says that if diners show interest in Margherita Mondays, the restaurant will likely keep the special running.

In addition to the BOGO pizzas, the pizzeria is serving $5 margaritas on Mondays. This week, the margarita menu included a terrific sweet-tart version mixed by bartender Chelsea Harris, who specializes in craft cocktails.  The pale-yellow Margarita di Saronno, served saltless, was made with El Charro tequila, Amaretto Disaronno,  agave and lime. This drink is worth a trip to the bar at full price. 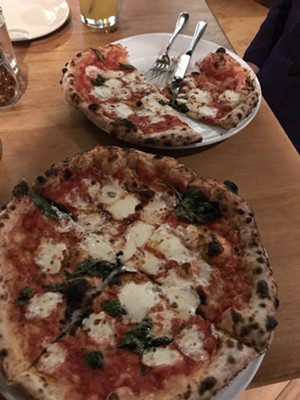 Two Margherita pizzas topped with velvety housemade mozzarella — along with two Margarita cocktails — set me and a friend back $23, not including tax and tip. We went home with four leftover slices. The restaurant was buzzing that night  — and Pizzeria Verità is best when it buzzes — as the kitchen turned out about 100 Margherita pies, according to Rao.

Pizzeria Verità is always a fun place to eat, and diners can count on fresh ingredients, creative build-your-own antipasto, an excellent (and big enough) Caesar salad, and top-notch service.  Starting in late spring, when Verità hitches up a new mobile pizza oven and hits the road, its pies will be available at local events and catering gigs, says Rao.

But for now, to indulge in this local Margaritaville, you'll have to venture to St. Paul Street.


Dining on a Dime is a weekly series featuring well-made, filling bites (something substantial enough to qualify as a small meal or better) for $12 or less. Know of a tasty dish we should feature? Drop us a line: food@sevendaysvt.com