Dining on a Dime: Four Corners of the Earth 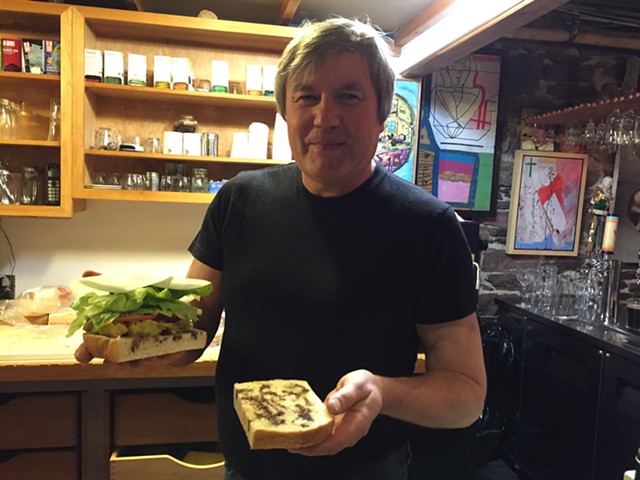 Ladislav Pancisin said he's made about 395,000 sandwiches at Four Corners of the Earth, his restaurant on Pine Street in Burlington.

"I was going to make one sandwich for every Vermonter and then be done with it," he said the other day. "But then the population keeps growing."

The population of Vermont has risen by about 14,000 people since Pancisin opened his small, subterranean sandwich shop in 2000. He'd be roasting salmon, chopping cabbage and mixing spice blends — all sandwich ingredients — until eternity if he kept pace with the people.  I recommend getting to Four Corners in the here and now, and adding a sandwich or two to Pancisin's tally.

The challenge at Four Corners of the Earth is choosing from 40 or so sandwich varieties, plus another set stored in the owner's head and available to mind readers.

"My ideas come from the great spirit," Pancisin said. "I'm just the medium."

I discussed a couple of possibilities with him on my recent visit — Sicilian eggplant and Hungarian chalamada.  "You hit two good notes," he said. "Try a third."

We settled on Greek artichoke, which consists of  artichoke hearts seasoned in a 12-spice blend, tomatoes, lettuce (Bibb and romaine), provolone cheese, basil (if available), olive oil and balsamic vinegar.

Pancisin piled  the ingredients between thick slices of white bread, then grilled the sandwich in a panini press long enough to toast the bread. The inside ingredients remained unheated, the cheese unmelted.

"It's an interesting experience: toasted, but cold within," he said. "That's what the great spirit wanted me to do. So that's what I do."

Pancisin said his sandwiches follow a basic guideline: For every dollar you spend, you consume about 100 calories. By that measure, my $11.99 Greek artichoke sandwich was roughly 1,200 calories.  That seemed high to me, so I checked with Pancisin. He amended the formula slightly to apply mainly to meat sandwiches. 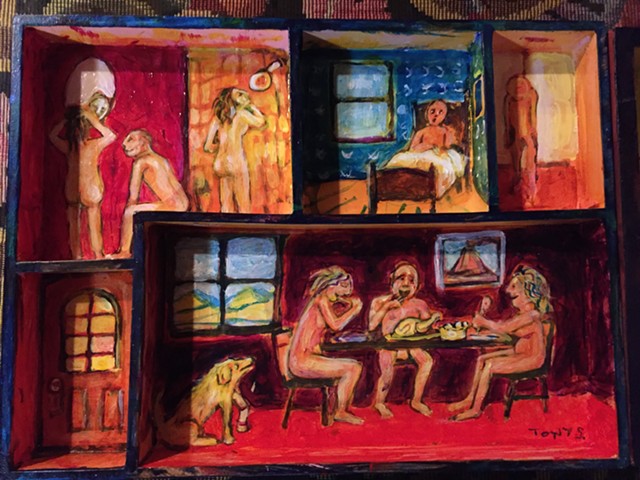 Pancisin, a self-described "hillbilly from Slovakia," carved out his space on Pine Street before Great Harvest, ArtRiots, Citizen Cider, et al., appeared in the neighborhood. He built the kitchen counter out of an old bowling lane.

The walls of his restaurant are filled with original artwork made by local artists. Pancisin is especially pleased with his recent acquisition of works by Burlington painter Tony Shull.