We’re not usually a poultry-and-potatoes kind of family, but we became one Saturday evening — with gusto — when we sourced our dinner from a foil container loaded with marinated chicken thighs, roast potatoes and carrots.
I purchased the two-person meal ($21.99) at the East Warren Community Market, a 350-member food co-op at a crossroads in the Mad River Valley.

“We have a tiny little kitchen upstairs,” Lise Cloutier told me. Her official title is kitchen manager, but she calls herself the dishwasher.

The kitchen is occupied by a diverse set of people who work with the dishwasher-in-charge. The roster includes Sue Schickler, who was the longtime chef at the Pitcher Inn in Warren, jeweler David Cohen (whose Baked Beads sign is a Waitsfield welcoming) and two juniors at Harwood Union High School who balance kitchen work with school, hockey and lacrosse.

“It’s like a big family there. There’s a lot of camaraderie, and there’s a lot of creativity,” Cohen said. “I love to cook. What place can you find a job where you walk in and they say, ‘Figure out what the soup is going to be today.’  It’s amazing to have that kind of creative freedom, as long as you turn out good food.” 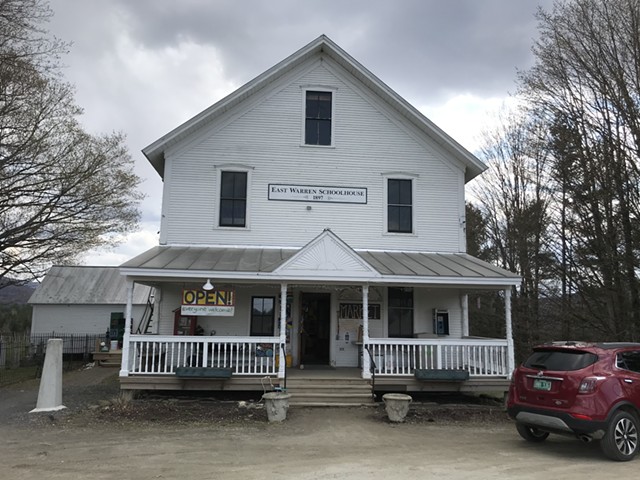 The co-op is in the Blueberry Lake neighborhood of Warren. In the summer, its market garden grows produce for the store and kitchen. The 19th-century white clapboard building stands beside a field with a few picnic tables. You can eat a picnic meal there, or take your food on the road.

I popped into the market after enjoying a new springtime activity: watching a construction crew revamp the skate park at the Warren School. The meal options in the grab-and-go cooler were polenta with roasted vegetables and chicken plus sides.

I chose the chicken for two reasons: It looked hearty, and I was drawn to its ingredient list. It wasn’t just the garlic, white miso, ginger, Dijon mustard and honey that wooed me, but the last item on the hand-written ingredient card:  “Love ….” For 11 bucks apiece for me and my daughter, that seemed like a bargain.

At home, we heated the meal  in the oven until it was golden-brown and warm. Between us, we had five pieces of chicken, generous portions of potato wedges and honey-sweetened carrots. This was home cooking at its best, minus the cooking.

“We pretty much cater to the community,” said Cloutier, 55, who grew up in a mill town in the White Mountains of New Hampshire. “I want everything that comes out of here to be really good.”  Then she riffed on the day tripper, like me, who stops in for a meal.

“It might be your last $10 of the day,” Cloutier said. “You’re on the road, you’re hungry, you buy something — and then it’s bad. I never want that to happen to anyone.”

She wants people to leave the East Warren Community Market with  quality food.

“They’re gone,” Cloutier said. “And they’re eating, and they [think],  This is awesome.”

That’s pretty much what we were thinking at the kitchen table Saturday night, when a conventional meal — chicken, vegetable, carbs — turned out to be an instant delight.