Dining on a Dime: Chubby Muffin

At the northern terminus of the "restaurant district," to borrow restaurateur Benjy Adler's term, is one of his restaurants: the Chubby Muffin.

The cafe at 88 Oak Street is a couple of blocks west of the prime district on North Winooski Avenue. As its name suggests, the Chubby is known for morning muffins and coffee.  But there's more: burgers, paninis, pulled pork sandwich and hot dogs; creemees in the summer; used books for sale or trade year-round.

Wednesday is Burger Night at Chubby Muffin, when the café offers a burger and beer for $12.  The restaurant serves a special burger that night; the offer is also good for the house burger,  black bean burger, and pulled-pork sandwich with cheddar and slaw (called Southern Gentleman).

We stopped by this week on Burger Night and lucked out on the special — a local-beef burger  with bacon, pickled red onions, maple and Sriracha chèvre (the master stroke), and spinach on a housemade bun.  I chose a Heady Topper to go with my burger, from a lineup of canned beverages that included Green State Lager and Citizen Cider. 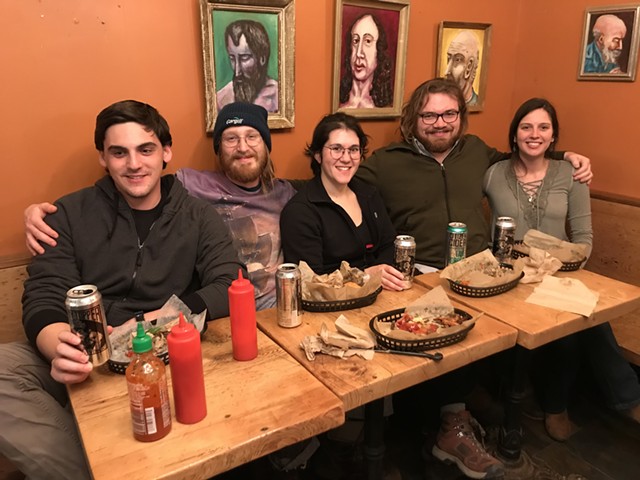 The sweet-and-heat of the chèvre was a nice touch, specially when the spread happened to match up in my mouth with a bite of crispy bacon. The burger comes with a slice of dill pickle and a pile of chips, all enjoyed with the strong wash and rush of Heady.

At the table next to ours,  wrapping up his meal, was Jack Birmingham, a Burger Night regular who was dining with friends.  He offered a keen assessment of the weekly special: "This one was every bit as good as every other week," observed Birmingham, 26, a project manager at Vermont Information Processing in Colchester.  If Birmingham is not out of town for work on a Wednesday, he's eating at the Chubby Muffin.

The meal is fast, the place is friendly, and the combo is classic (with a creative twist). In an age of  "pairing," has anyone come up with a coupling that can top a burger and a beer?