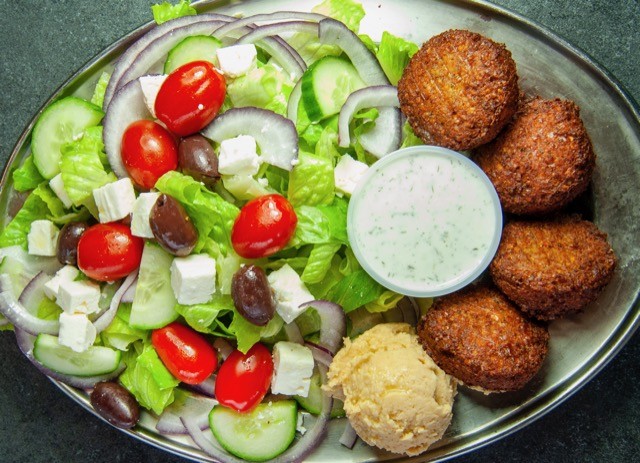 My family and friends like to poke fun at my compulsion to take photos of everything I eat. I have been known to swat away forks and hands poised to descend prematurely over platters or bowls.

With probably thousands of photos of food on my phone, naturally, it's on the rare occasion that I don't snap a pic that I end up wishing I had.

That's what happened Saturday after I picked up dinner at Café Mediterano in Essex Junction. While I was heating up two different kinds of lamb that owner Barney Crnalic had saved for me from his most recent Friday night lamb special dinner, my husband hovered.

He had worked a long weekend day starting before 6 a.m. He was hungry and, understandably, just a little impatient. Without thinking about photos, I told him to go ahead and start with the Greek salad with falafel.

When I belatedly realized it would make a great Dining on a Dime candidate, the salad had been completely consumed between the two of us.

I debated using it as an excuse to go get another salad, but the small restaurant that relocated last July to Pearl Street from its original Five Corners location is closed Sundays and Mondays.

Luckily, Crnalic had a photo I could use.

It's worth noting that there are a number of sub-$12 meals on the Café Mediterano menu including the grilled chicken and beef-and-lamb spit-grilled gyros version of the Greek salad for $9.99 and $10.99, respectively.

I'm also a big fan of the cevapi, which are long cigar-shaped rolls of spiced ground meat, and come on a platter with a simple salad, cucumber-yogurt sauce, rice and pita for $10.99. You can also get them in a sandwich for $9.99. (If you get the sandwich, opt in for the $1.25 extra kajmak, a soft whipped cheese similar to a tangier, fluffy cream cheese.)

The cevapi and the Friday night lamb dinners are traditional Bosnian specialties from Crnalic's heritage. He also makes a great version of spinach phyllo-wrapped pie similar to Greek spanakopita with his own blend of four cheeses, which he offers from time to time. 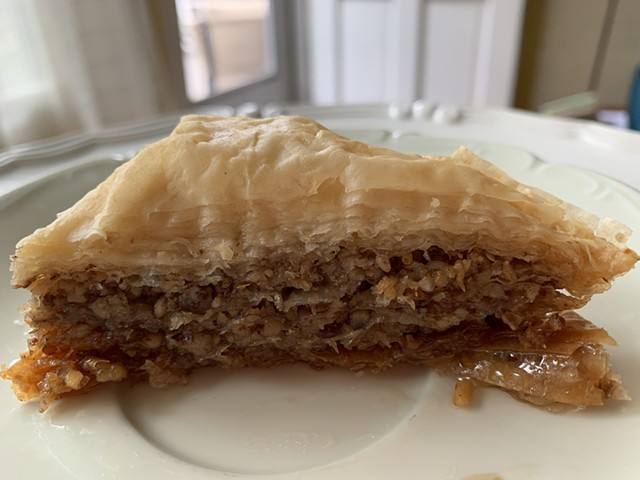 If you are ordering dinner for two, there are even a couple good sandwiches for under $9, which will enable you to squeeze in an order of baklava: two generous triangles for $4.99.

Crnalic has perfected his version of the syrup-soaked ground nut and phyllo pastry over the years. He takes what he likes best from the Arabic/Turkish version and the Bosnian approach. "I make it how I actually want it," he told me.

It's not how his mother, who still lives back in Bosnia, makes her baklava. When she watches him make it over FaceTime, she can't believe how much phyllo he layers on top, Crnalic said.