Dining on a Dime: Burlington Bay Market & Café in Burlington

After 17 years of eating creemees at Burlington Bay Market & Cafe, I decided it was time to expand my horizons.  To kick off summer, on a recent visit I ventured past the creemee window and headed to the lunch counter inside. From there, I would travel even further, to the high deck overlooking the marina and lake beyond.

As a rookie at the lunch counter, and with a $12 dining limit, I sought advice: Reuben or hot pastrami sandwich? The cashier told me the pastrami on rye was "pretty popular." That was all the persuading I needed: I hadn't eaten a pastrami sandwich in Burlington since 2011, when Sadie Katz deli shut down. At $10.99 ($12.20 with tax), I figured I'd grab a glass of water and forego the creemee.

Despite a morning downpour, I found a dry table and chair on the outside deck, thanks to a server who took time to squeegee.  My sandwich soon was delivered.
The meat — hot, salty, fatty and chewy — dripped over the edge of the grilled rye swirled with pumpernickel.  Just the right amount of  Dijon mustard spiced up the proceedings.  There wasn't a even dill pickle to interfere with the main event.

Sandwich. Period. And that's OK with me.

So OK, that despite the slick of grease and mustard on my fingers, I didn't want to part with my fast-vanishing food to hustle inside for a napkin. I have a deep-seated mistrust of the seagulls that swoop past human feeding grounds at the Burlington waterfront. We lost a Beansie's hot dog — snagged right out of its roll in my daughter's hands — when she was in kindergarten. She's in college, and I've never lived down the moment.

Fourteen years later, I use a piece of paper from my reporter's notebook for a napkin rather than leave my sandwich alone. I'm loving the cloudy sky view, I'm digging the meal, I'm watching for birds.

Then, at a nearby table, a family of four finishes lunch and gets up to leave. I decide I have to talk with them (duty calls) for this story. I've eaten half my sandwich when I dash across the deck for a quote.

I was savoring the second half of my pastrami on rye even as James Clancy, a 12-year-old from South Burlington, engaged me in conversation. Soon I'm talking with his stepsister, Savannah Werner, also 12. She had something to say about her taco salad and the lovely setting.

"I feel like it's really good," Savannah said. "And clean."

James announced his summer vacation plans —  "camp and creemees" —  and told me what he thought of his crab cake sandwich: "Love it."

As they descended to the creemee window with their grandmother, I returned to my sandwich. 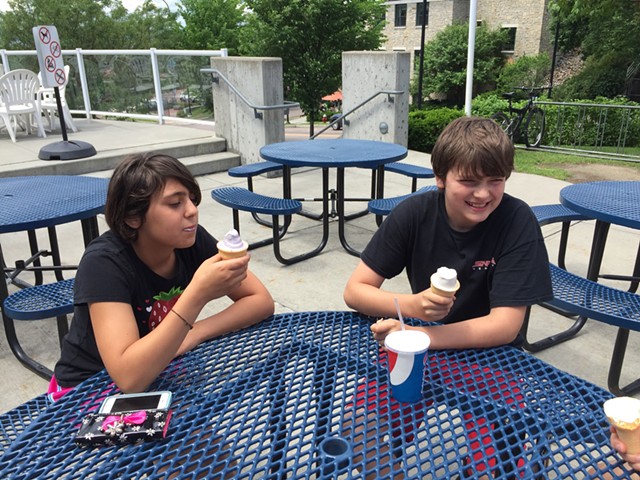 The man at the neighboring table had sobering news: "A bird came, flew right in, took your bread."

"You're kidding?" I said. But he wasn't. The proof was on my plate.

He and his wife tried to defend my meal, he told me, but the bird was too quick. Didn't even alight, his wife added, just grab and fly.

The couple, Joey and Susan Ward, are from Hattiesburg, Miss. They're visiting Vermont for the first time and fell quickly in love with it. On their second day in Burlington, they'd already had two lunches at Burlington Bay.

"This is an awesome place,"  Joey Ward said. "We like to be outside when we can."

"For sitting and relaxing," Susan Ward added, "this is the spot."

They recommended the Philly cheesesteak and fish tacos, also the crab cake sandwich. "It's all fresh and reasonably priced," Joey Ward said. "Outstanding."

The Wards gave me their bag of sweet potato chips as reparation for the seagull's sin. And I violated the $12 limit on my meal, and bought myself a maple-vanilla creemee.