Dining on a Dime: Breakfast Tacos at Middlebury's ShireTown Marketplace 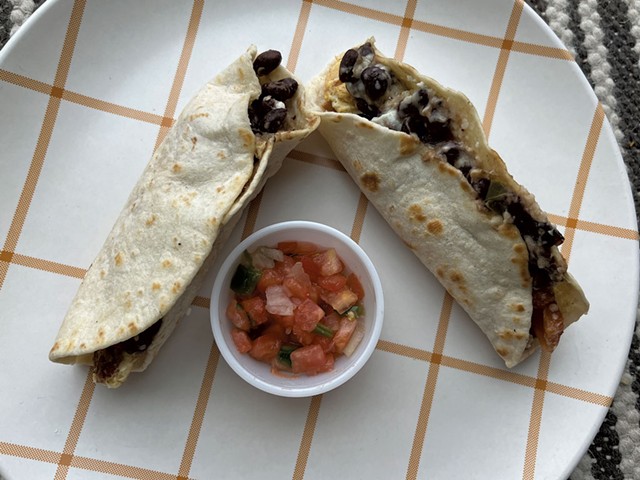 When I last spoke with Kevin Archambeault, the conversation focused on his amazing creemees. In August, the ShireTown Marketplace owner had opened the only creemee window in downtown Middlebury — and it was a hit.

But since the meticulously renovated, multifaceted market and restaurant opened fully in mid-September, I've fallen for a different ShireTown offering: breakfast tacos. Everything except the creemees have shifted inside for the colder months, but Archambeault's breakfast tacos are still available every Tuesday through Saturday morning. I order one of each: veggie ($4.50) and rotating meat options ($5). They're a quick and filling breakfast to eat in ShireTown's lovely dining area or on the go in my car, where I inevitably spill the bright, fresh housemade pico de gallo.

ShireTown's building, at 54 College Street, a block from Middlebury College, has been many things in its 200-plus-year history. Most recently, it was home to Ales Family Restaurant. Getting the word out that it's under new ownership — and open for breakfast — has been Archambeault's biggest challenge. 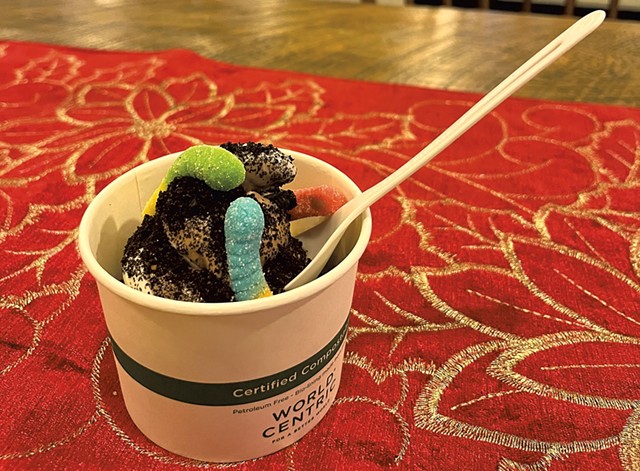 "Our goal is to shift the whole mentality of what this place is and what it means to the community," Archambeault said while sitting in one of the new banquettes. On the wall hangs an old family toboggan. The wood-fired oven kicked off cozy heat.

ShireTown does a bustling lunch business, offering a dialed-in, simple menu of sandwiches, such as slow-smoked barbecued pork shoulder, tri-tip beef, French onion grilled cheese or black bean veggie burgers on a variety of housemade breads. The menu's Santa Maria-style barbecue influence — with the style's signature tri-tip and open fire cooking — comes from Archambeault's time on California's Central Coast, where he and his wife, Dani, lived before moving to Vermont in 2018.

The market is starting to get customers from the college, Archambeault said. A few morning regulars stop in for tacos, biscuit breakfast sandwiches, chilaquiles or challah French toast with a cup of joe made with beans from Middlebury roaster Iluminar Coffee.

"When we first opened, we had a warmer up front [for the window], and we kept it stocked with tacos," he continued. "Ultimately, people really wanted to see the space, so they were coming in anyways."

Now, the tacos are made to order in the restaurant's open kitchen. Every morning, the team fire-roasts red peppers in the hearth; those become the base for the veggie taco, along with black beans, scrambled eggs and Jack cheese on a warm flour tortilla. (Gluten-free corn tortillas are also available.) 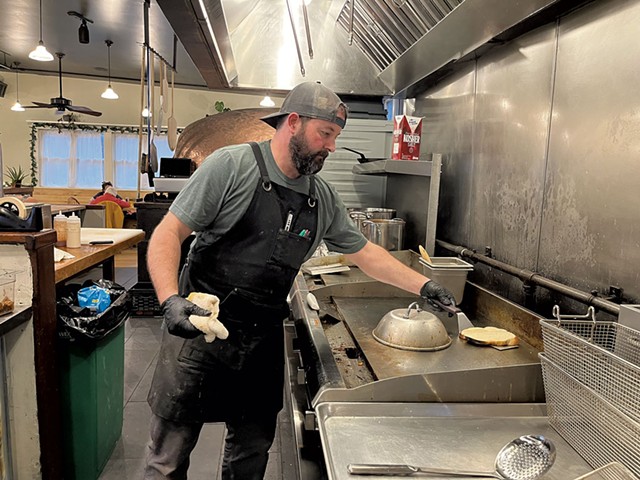 The meat tacos feature the tri-tip steak or smoked pork from the lunch menu, chorizo, or, most recently, thick-cut bacon, which started as a staff meal — Archambeault calls it "the gringo version."

"But people dig the bacon-egg-and-cheese," he said. "I can't make enough of those things."

ShireTown also serves the tacos at Saturday brunch, along with specials such as smoked-pork hash. Beer, wine and cider are on tap.

Archambeault expects to bring breakfast tacos back to the window in the spring, when the weather gets nice. In the meantime, you can walk up and get a creemee all year round.