Dining on a Dime: Bessery's in Burlington Sizzles Up Meats and More

The Bessery family has owned a butcher shop at 1398 North Avenue since before its current co-owner, Bryan Bessery, was born. His grandfather, Peter Bessery, opened Bessery's Quality Market in 1963. Bryan, the youngest of eight kids, joined the clan in 1974.

When Bryan, now 47, took over the family business about 20 years ago, he became the second member of his generation to run the store. Chatting with Seven Days, he joked that the age range among his siblings is so great, it almost counts as two generations.

About seven years ago, Bryan started serving freshly cooked fare out of a food truck behind the store. He wanted "to test if it was worth putting in a deli," he explained. Bryan also drove the rig to some events around town, but the driving, he said, "made me too stressed out."

The positive reception to Bessery's hot food convinced Bryan and his wife, co-owner Kelly, to add a kitchen when they rebuilt the store about six years ago. They also renamed it Bessery's Butcher Shoppe & Delicatessen.

These days, Bryan stays busy slapping house-ground burgers on the flattop and slipping fries into hot oil in the kitchen at the front of the shop. The retail store in back is still anchored by a butcher case filled with raw meat, including housemade sausages and bacon-cheddar beef patties. Customers place food orders back there. Seating is limited to a few picnic tables outside the front of the store.

Bessery's deli menu of all-American favorites ranges from Philly sandwiches and build-your-own grinders to chicken wings and burgers. On a weekday lunch visit, my eye and rumbling stomach were drawn to the "tower burgers," a selection of stacked burger options with fries for $11.99 — just within our Dining on a Dime budget.

After briefly considering the Baconator, a full 3/4 pound of meat composed of twin 1/4-pound patties and a 1/4 pound of bacon, I settled on the Big Red. This combo slathers Bessery's version of a slow-simmered, ground beef, chili powder-kissed sauce over stacked patties sandwiched with melty American cheese, diced onions and sharp yellow mustard. Served with a tangle of dark golden brown fries, Big Red was a meaty, messy, salty, just-right-fatty celebration of snack shack cuisine — and hefty enough to feed two of me. 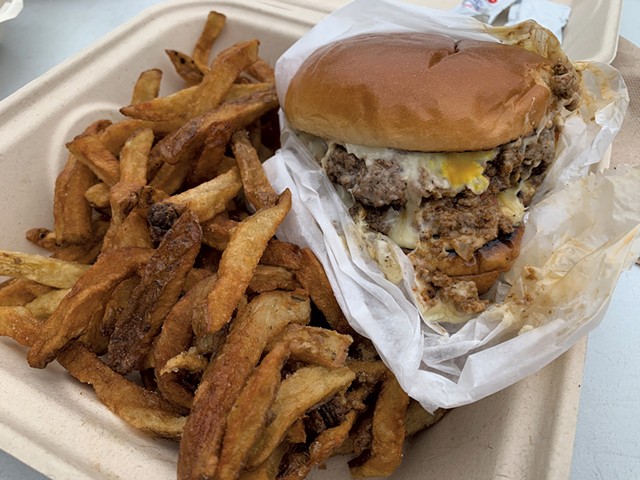 The mildly spicy sauce recipe is "my mom's take on Charlie's," Bryan said, referring to the legendary Charlie's Red Hots sauce served over hot dogs. The Big Red used to include a sliced hot dog on top of the beef patties, "but it was too much," he said.

If you prefer your Red Hot sauce with dogs, the Tommy Red Hot Platter features two sauced hot dogs and fries for $8.99. "We named it Tommy after my uncle," Bryan said. If you're really counting pennies, the 1/4-pound kids' burger with fries for $4.99 is a steal. You don't need to be a kid to order it; just don't try to add veggies, Bryan cautioned with a grin.

"If it's not better, then I should probably stop doing what I'm doing," he said.