Dining on a Dime: Barrio Bakery 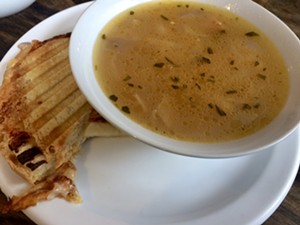 I'd only visited once, and just for coffee, but I'd heard that Barrio's owners, Jessica and Ryan Bunce, are opening a breakfast and lunch café, dubbed One Radish, in the Richmond space formerly occupied by Parkside Kitchen (and before that, On the Rise Bakery).  It was time for a taste of the coming attractions.

Waiting in line to order, I noted the spot's friendly, neighborhood vibe. Nearly every person who walked through the door had a warm greeting for somebody who was already ensconced there. At one table, midwives talked about work. At several others, folks typed away on their laptops. One coffee drinker was reading a book by Haruki Murakami.

The pastry case was full of good-looking treats, including a savory tart, perfect-looking scones and croissants. Signs advertised additional offerings such as panini, a recent addition to the Barrio menu. I wanted the one stuffed with fontina and apples, but I also wanted the white-bean-and-ham soup, so I ordered a combo ($7.50).

The sandwich was toasty and melty, with slices of apple falling out the side. The soup was satisfying and rustic — white beans, ham chunks and pieces of onion sat in the golden broth, and little globules of melted fat floated on top. I love fat, so I mean that in the best possible way.

There was enough cash left over for a nicely made soy cappuccino with a little bit of maple ($3.88), which served as dessert.

When One Radish opens, count me in.