Dining on a Dime at Fry Daze of Vermont in Colchester

As a food writer, I spend a lot of time offering restaurant recommendations. Readers and friends have emailed me to ask about everything from where to eat during a Pine Street brewery crawl to the best pit stop in White River Junction. I've even helped a couple sort out which restaurants might have pleasant, reservable outdoor space to host a small wedding.

Hence my surprise when I answered my phone recently and the caller didn't ask for a recommendation but offered one.

"You've got to check out Fry Daze," the person said. "They've got maple fries."

The sweetness from their multiple-maple treatment put me in a daze. tweet this

It must have been the power of the maple fries that led me to pick up in the first place, because I ignore many unknown numbers for fear of hearing how out-of-date my car warranty is. But later that day — sitting at a picnic table overlooking Malletts Bay, fries in hand — I vowed to stop screening my calls.

Fry Daze of Vermont opened on May 10 at 181 East Lakeshore Drive in Colchester, taking over the bright pink truck that was the home of Bri's Fries for nearly 12 years. (Bri's Fries opened a brick-and-mortar restaurant in Milton in January.)

The truck's lakeside view and classic burger-and-fries menu are a quintessential summer combo. As I pulled into the parking lot on one of the first beautiful 70-degree days, it was clear I wasn't the only one who was ready to dive into snack shack season. The place was packed. 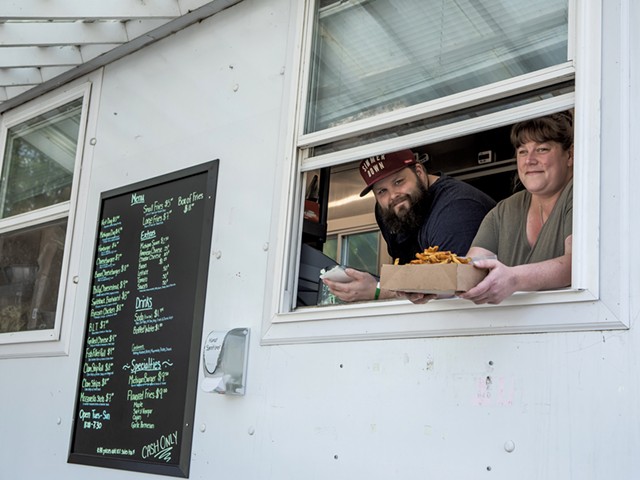 Despite the crowd, my dining companion and I didn't wait long to order. The chalkboard menu lists Michigan dogs, Switchback Brewing bratwurst, mozzarella sticks and other fried favorites — all priced at less than $10, cash only. With our Dining on a Dime budget of $12 per person in mind, we ordered a cheeseburger ($7), clam strips ($8) and the maple fries ($9). If I hadn't already planned to order the fries, the smell of maple wafting through the truck's window would have changed my mind.

A quick wait later, our number was called. The glistening fries looked as tempting as they smelled, and I snagged one from the cardboard box before I made it off the covered deck attached to the truck.

Back at the picnic table, with my fingers already sticky from the first fry, I committed to a fry-first approach. The pint of fries — made from hand-cut potatoes, tossed in a maple-bourbon seasoning and drenched not once but twice in Vermont maple syrup — was entwined in a way that encouraged embracing chaos. They were messy, and that was part of the fun.

Sticky and crispy, these specimens had the salty, crunchy golden-brown exterior and soft interior I hope for in a hand-cut fry. But the sweetness from their multiple-maple treatment — and the artfully balanced combination of sweet and savory — put me in a daze. I completely forgot that I had other food to eat.

When I did turn my attention to it, that other food was satisfying, filling and exactly what I wanted to eat by the lake. The clam strips were perfectly fried: crunchy, not greasy. They came with two sides of tartar sauce, which was the right amount to make it through the whole basket.

The cheeseburger was humongous by traditional snack shack standards; the menu lists it as a five-ounce all-beef patty. Fry Daze lets customers make any burger a double for an additional $3, but even a single dwarfed the paltry burgers some places serve.

Jessica Dickinson, who was taking orders and running the pass the day I stopped by, later told me that burger size has been a real selling point for the new business so far.

"We had one person say, 'I order a cheeseburger and French fries everywhere I go, and I always leave hungry. But I was full after eating yours,'" Dickinson recounted. "And that's what we want. We want people to leave here fat and happy."

Dickinson is a longtime friend of Fry Daze owner Steve Harrington. Harrington also owns E&S Transport, a towing business based in Waterbury; Dickinson is helping get the business up and running while she waits for her regular job as a manager at the Majestic 10 cinemas to start up again.

"We live in the campground across the street, and we knew the truck was for sale," Dickinson said. "Steve has always wanted to have a diner-type thing, and it's such a beautiful location here that he pulled the trigger."

They hired chef Dan Gutches, who brought the menu — and Dickinson's idea of maple fries — to life.

"I love maple syrup, on anything," Dickinson explained. "The moment we hired him, I told Dan, 'The one thing I want on the menu, and have never seen anywhere in this maple syrup state, is maple French fries.' He made it happen within, like, 10 hours, and boom, there they are."

And thank goodness they are. My travels don't often take me to Malletts Bay, but I'll make it a summer destination now that I know these fries exist.

Fry Daze is currently open Tuesday through Sunday, 11 a.m. to 7:30 p.m. As summer gets into full swing, Dickinson and Harrington plan to be open daily, with extended hours on Friday and Saturday. They're playing the season by ear, Dickinson said, but hope to extend it all the way through September.