Dining on a Dime: ArtsRiot 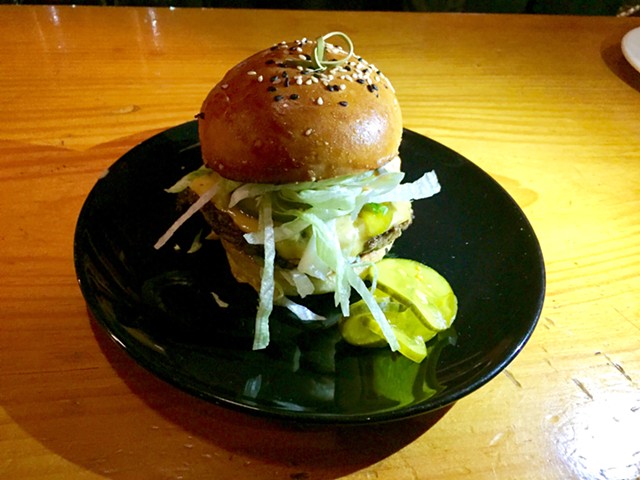 The info coming from the ArtsRiot stage was grim.  At a panel discussion Wednesday evening about women who work in the food industry, the audience  learned that women in Vermont earn 16 cents less per dollar than men. We were told that Vermont and Mississippi are the only states that haven't elected a woman to Congress, and that being a working mother in the Green Mountains presents a particular challenge.

"It was easier to open a restaurant than it was to find child care in this state," said panelist Cara Chigazola-Tobin, chef/co-owner of Honey Road.

The women on the panel had interesting stories to tell. But circumstances for women in Vermont — as depicted by the stats and data we heard — were not much to celebrate.

To escape this distressing state of affairs there was only one thing to do: Eat. So I snuck out early and found a seat at the ArtsRiot bar, where I ordered a burger. A man-made burger. 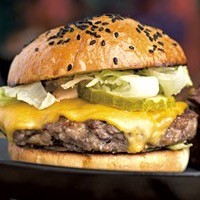 The 400 burger, named for ArtsRiot's address on Pine Street, is chef George Lambertson's riff on a Big Mac. Two all-beef patties special sauce lettuce cheese pickles onions on a sesame seed bun: a run-on jingle describing a meal that' s been kicking around for half a century.

That's pretty much the 400 burger, minus the onions (get it on, boys!) and with extra pickles on the plate. It's a good-looking mound of food, unfettered by sides, that will lift your spirits.  The mix of drip (sauce) and crunch (lettuce) is on the mark.  Like the McDonald's version, you waste no time eating it.

Two seats down the bar,  I saw a man who was so into his burger he didn't look up from his plate. He cut it in half  before eating — the right move — to get each  component in every bite.  My neighbor at the bar struck up a conversation with me about food. He had just eaten his first 400 burger. He mentioned that he once traveled 18 hours by bus across Mexico to eat mole. He talked about French cheese, and he came back to the Pine Street burger.

"Sometimes ," remarked Ed DesLauriers,  "a straight-up good burger is a wonderful thing to have."