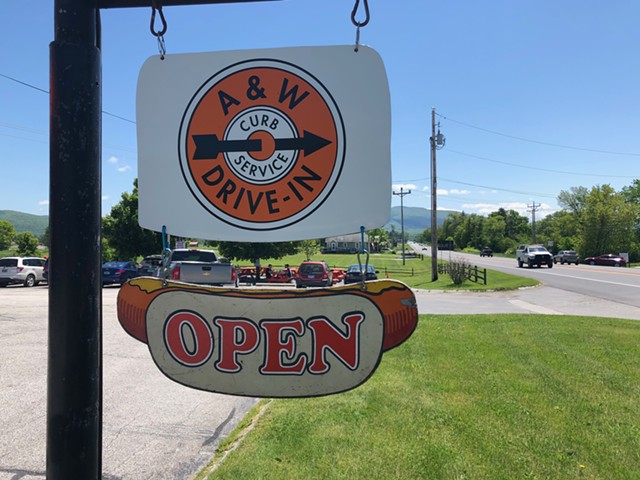 A newly minted 21-year-old, I’m still in the honeymoon phase with beer. I love the stuff in all its forms, from overpriced IPA to cheap supermarket six-packs. But last week, I had a hankering for a different kind of brew, the kind that begs to be served with a generous dollop of vanilla ice cream.

So, two friends and I caravanned to the A & W in Middlebury to satisfy our RBF (root beer float) cravings. It was a hot day, so we plopped down under a big shady tree next to the parking lot. A couple of other families ate from their cars, trays clipped to the open windows. If it wasn’t for the beautiful Green Mountain backdrop, we could have been at any one of the chain’s thousands of locations.

The 100-year-old greasy, meaty establishment was an unlikely choice for two of us: I’m a vegetarian, and one companion was trying to limit her caloric intake. Regardless, all of us were determined to get gut-bustingly full.

I had already done the math: a regular-size root beer float was $4, so I had approximately $8 to spend on food to fall within the $12 Dining on a Dime price limit. I was delighted to see a veggie option on the menu, meaning I didn’t have to fall back on my usual fast-food last resort of side dishes.

While I’m sure a large order of cheese curds ($6.95) or onion rings ($3.75) would have made for a filling meal, I opted for the black bean burger and made it a basket, which came with fries and a teeny container of coleslaw for $7.75. Most menu items are priced about the same, each with a cheaper sandwich-only version.

Our smiley waitress, wearing one of the brand’s characteristic orange baseball caps, brought all our food over at once in plastic baskets, the kind that usually house chicken tenders at themed diners. I unwrapped the burger from its foil, and found exactly what I expected: a once-frozen patty, enhanced with a single leaf of lettuce and a slice of tomato, sandwiched in a doughy bun.

It was as all-American as a veggie burger could be. The burger itself tasted familiar, which I later found out was because it’s Morningstar Farms brand; this A & W doesn’t sell the Beyond Burger like some other locations. I found it as tasty as it was predictable (which is to say, very).

The fries were yummy, too — but soggy enough to warrant the use of a fork. The coleslaw unexpectedly contained pineapple, which I kind of liked.

But the main attraction was my RBF, its foam spilling over the top of the tankard. I employed both spoon and straw to tackle the behemoth, alternating bites and slurps until I could see the bottom of the glass. The ice cream was a bit grainy, owing to freezer burn, but it hit the spot just the same. Cold and sugary, like any float should be.

My friends were equally satisfied. One of them, who's trying to increase his caloric intake this summer, ordered the Coney chili dog basket and a vanilla shake, which clocked in at 1,605 calories and $9.20. (The shake had a bad case of freezer burn.) My friend trying to reduce calories got a corn-dog basket with sweet potato fries for 370 calories and $8.50.

Good thing we were eating outside, because that ish was messy. And among the three of us, quite a bit of plastic, paper and styrofoam was left over at the end. That ’50’s feel comes at the price of sustainability.

Lots of leftover fries, too, because the portions were huge. As far as Dining on a Dime is concerned, the A & W's  food-to-price ratio is as good as it comes. I recommend pairing it with a swim at the quarry down the road, though it’s probably best to do the swimming first.