Dining Inside at Montpelier’s Oakes & Evelyn Sitting down for dinner in Montpelier's new upscale restaurant, Oakes & Evelyn, was like falling through a portal into a fabulous alternative universe, where unmasked strangers were enjoying themselves. "It feels like a secret club we're in, doesn't it?" said my partner, Joshua.

It had been half a year since I'd eaten inside a busy restaurant; getting vaccinated made the visit possible. My day job at an in-person therapeutic school gave me access to the Moderna vaccine, for which I'm deeply grateful; Joshua, who works in mental health, has also gotten the "jab."

Justin Dain, chef-owner of Oakes & Evelyn, said that the restaurant has had more dine-in customers than takeout since it opened on February 3. I can only presume that fellow diners, vaccinated or not, craved what we did: meals that came from neither a box nor the home kitchen, a beautiful atmosphere that we didn't have to clean, and a couple hours in which the restaurant's hum and bustle eased the stress of this past pandemic year. That remains an assumption, though, as conversing with unmasked strangers was still a bridge too far for me to cross.

Experiencing the scene and sounds of the busy restaurant quickly got me misty-eyed. tweet this

It was a daring move to open a high-end restaurant at a time when one in six eateries nationwide has shut down. Dain, who grew up in Waterbury, said that he began planning the restaurant about a year ago, although his ownership dream began even earlier. He and executive chef Amanda Champagne "have been talking about this for years," Dain said.

The pair worked together at Hanover Inn Dartmouth and both attended New England Culinary Institute in Montpelier. "We enjoy working with each other, and we balance each other in many ways," Dain said.

The restaurant is named in honor of Thomas Oakes, Dain's maternal grandfather, and for Evelyn Darby, a great-aunt who raised his father. He said both family members, whom he loved to cook for and with, supported his culinary education and career before they passed away.

Oakes & Evelyn is in the State Street location previously occupied by Kismet, which has returned to its original site on Barre Street. Fans of the latter restaurant will find enough in common with Oakes & Evelyn, where Dain and Champagne cook "regional American cuisine with broadening touches — spices from Japan or South America," Dain said. Most of the meats and seafood come from New England; he hopes to incorporate more local produce as the warm season arrives. 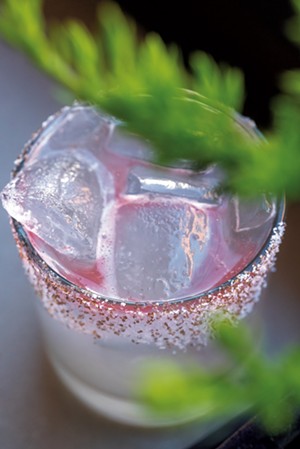 The restaurant's interior is a mix of unaltered and updated elements, with vaulted, tin-punch ceilings; Edison bulb light fixtures; walls painted dusty blue; and a dark wooden floor that's curved and buckled by the wear of restaurants past. At current half capacity, the dining room can hold about 20 customers, plus seven at the bar. Across from our table was an air-filtration unit the size of R2-D2. That, along with the restaurant's adherence to cleaning and spacing guidelines, helped me more comfortably reacclimate to indoor dining.

Nonetheless, I felt rusty navigating menu choices in person and repeatedly apologized to our genial server for taking so much time to decide. For drinks, we considered the dozen wines on the list, which skew toward the natural side. Then there were the Vermont and New England microbrews, which heavily favored IPAs.

Our server steered me to the Earthly Paradise cocktail ($13), made of gin, pear cordial, thyme, lemon and whey left over from housemade ricotta. Warmly herbaceous and a touch sweet, the whey added body and creamy umami.

Experiencing the scene and sounds of the busy restaurant quickly got me misty-eyed: a bartender shaking ice and booze to craft a cocktail; a parent talking to his toddler, whose dinner flotsam encircled their table; the delicate clinking of kitchen staff carefully plating our starter.

The half dozen oysters ($18), from Wellfleet and Island Creek in Duxbury, Mass., were enlivening — and fresh enough to make the mignonette and Tabasco citrus aioli unnecessary. Dain said he's been surprised by how many takeout customers order raw dishes — oysters, beef carpaccio, hamachi crudo.

For takeout, the restaurant's online ordering system allows customers to choose when they want to pick up their orders, rather than telling them when their meals will be ready. This precision in food timing allows the restaurant to offer a broad array of options that survive the takeout box. Dain has set up the system to allow only two takeout orders every 15 minutes, ensuring that the kitchen can keep up with in-person dining.

The takeout and in-person menus offer both small and large plates; we had four small and one large. First up was the crispy octopus ($17). One thick, deep-fried tentacle on top of crispy fingerlings rested in a curry sauce with yuzu and coconut, alongside a fried shishito pepper. We devoured it along with the eggplant ($14), which came with a smoky, creamy Sichuan sauce. It was served on a deep-fried rice cake and topped with pickled chiles and local microgreens, which balanced the richness.

Our server had suggested the Caesar salad and the gnocchi, both of which will hasten my return to Oakes & Evelyn. The broccolini Caesar ($15), easily one of the top two Caesars I've ever eaten, included oven-roasted florets and a dressing that melded perfectly with the soft egg. Lacy Parmesan frico and brioche croutons were crispy yet soft enough to appease even the tender-mouthed.

The potato-free, Parisian-style gnocchi Bolognese ($16) was made from pâte à choux, the type of dough used to make cream puffs and éclairs. Its thimble-size pillows came with a Bolognese sauce made from Black River Meats pork and New England beef and were topped with generous dollops of house ricotta. Still delicious in my leftovers the next day, the dish is especially amenable to takeout and comes in small and large sizes.

I had a glass of Salchetto sangiovese ($11), made from organic grapes, along with the roasted duck ($33), sourced from La Belle Farm in Ferndale, N.Y. A medium-rare duck breast and a crispy, salty, confit thigh came with Imperial black rice, charred blood oranges, baby unpeeled turnips and an ultra-smooth celeriac purée, finished with duck fat and shallot vinaigrette.

The open kitchen, cozy dining space and staff cohesiveness evoked a sense of rhythm between the front and back, servers and customers. Our server told us that about half of the diners appeared to be seniors; I wondered whether many were vaccinated. Two parties that night told her this was their first dinner out in a year.

The other diners, our server said, tended to be couples in their thirties — our age group. Though I wanted to speak with fellow patrons, I worried that would rush the resocialization process. One older couple took photos of each other, smiling against the backdrop of the hardworking kitchen staff. Another white-haired man thanked the chef, who already knew him by name.

The dessert menu, which seemed designed to appeal to one's inner child, included a banana cheesecake tart and a chocolate cinnamon roll with burnt marshmallows. Our peanut butter cake ($10) was playful, with a smattering of peanut butter and chocolate crispies scattered on top. In no way did we need dessert after such a feast, but it made our dinner date last longer, which we relished.

"Somewhat back to normal?" Joshua asked me as we prepared to leave. "No!" I emphatically replied. Though happy with our dining experience, it did not feel like pre-pandemic times, nor did I want to return to them. I'd rather envision a post-pandemic existence that's an improvement — for restaurants and more broadly.