The week before Christmas, the Lodge at Spruce Peak, located at Stowe Mountain Resort, reopened its two main restaurants with new names, menus and décor after a $6 million renovation. The grand Alpine Hall boasts soaring ceilings, a sweeping bar and menu offerings from a $24 Vermont cheese plate to a $175 32-ounce, dry-aged rib eye. The smaller Tipsy Trout offers freshly shucked New England oysters, sushi and many shareable plates. Together, they anchor the dining options at "Vermont's most elevated luxury slopeside community," according to Spruce Peak publicity materials.

On Main Street in downtown Stowe, the Biron family runs Butler's Pantry, a cozy, homestyle breakfast-and-brunch eatery on the first floor of the early 19th-century Butler House. The family has owned and operated an inn there since 2009; they opened Butler's Pantry in 2016. The restaurant features exposed brick walls, an eclectic array of tchotchkes and framed accolades from Yankee magazine and Yelp's annual Top 100 Places to Eat. Menu staples include homemade buttermilk biscuits drenched in sausage gravy and cheddar-jalapeño pancakes.

"We keep it simple, homemade stuff." Zoe Biron tweet this

No matter their elevation, literal or figurative, neither Butler's Pantry nor the new restaurants at the Lodge at Spruce Peak have avoided the labor crunch currently challenging the service industry worldwide. But they're each approaching the problem differently, based in part on resources and on what the operations need in order to keep feeding tourists and locals alike in the iconic mountain town.

Based on what he's seen while working at the lodge for the past five years, Blomgren, 35, said that the employment market is especially tight right now. But even pre-pandemic, upper-level positions often included relocation incentives to entice candidates to move to Vermont.

"It's always been somewhat difficult to recruit from out of state for more seasoned professionals," Blomgren said. 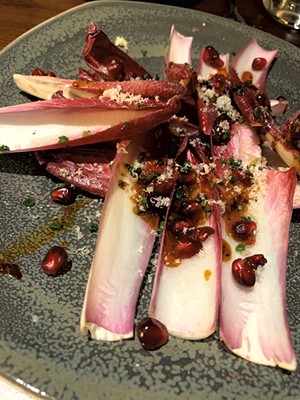 During a recent dinner visit to the Tipsy Trout, staff were attentive — though the bar must have been as short-staffed as the kitchen. My cocktail arrived, with the server's apologies, at least 10 minutes after my husband's beer and a few minutes after our first courses.

Seated in a corner of the newly decorated room, we had a view — through a sculptural wall of wooden slats — of the hotel's grand atrium. I would've traded the view for one of the tables fitted with cushy sage-green banquettes rather than our hard wooden chairs.

We grazed our way through the menu with three small plates, two mains and two desserts. Highlights included a gorgeous red endive salad ($17) that partnered crunchy leaves and sweet-tart pomegranate arils with a spicy chile dressing and dusting of savory grated cheese. A hunk of meaty, moist striped bass ($38) was crowned with shatteringly crisp skin and nestled on earthy lentils with a soul-warming walnut and red pepper sauce and dollops of a sun-yellow sauce with a hint of tartness. (We needed all the sun and warming we could get as the temperature plummeted to negative 15 degrees that night.)

Less successful was a bowl of uni bucatini ($34), in which a tangle of overcooked pasta swam in a creamy, disconcertingly sweet sauce with not quite enough balancing brininess from the sea urchin and trout roe or acidity from the yuzu.

A pair of desserts also missed the mark, offering more style than substance. The Twisted Key Lime ($13) and the Runaway Chocolate ($14) featured so many disparate elements that they brought to mind Rube Goldberg contraptions and delivered neither limey punch nor chocolaty depth.

The next morning, we met local friends at Butler's Pantry, where co-owner Paul Biron, 69, roamed the dining room chatting with customers. His daughter, Zoe, 30, holds down the kitchen with her boyfriend, Frank Ferrante, and two other longtime cooks.

The Birons' most recent kitchen hire is dishwasher Torey Meister, who joined the team in mid-September in time for the busy foliage season. In a Craigslist job ad, Paul Biron offered an $18 to $20 hourly wage and the incentive of a $1,000 bonus for perfect work attendance through the end of the year, he said.

"In the past," Paul said, "we were lucky if our dishwashers made it to work two out of the three days they were scheduled. I spent quite a few days doing dishes."

Dishwashing is a critical role, Zoe emphasized. It's also a hard physical job and not for everyone. "If the dishwasher doesn't show up, one of us has to do it," she explained, which often means pulling a cook from the line and slowing everything down.

The shortage of reliable dishwashers pulled Ferrante into a new career. He was working as a fly-fishing guide when he met Zoe and started helping out at the restaurant when dishwashers didn't show.

Meister, 52, has worked most of his life in construction and restaurants. He's from Walden originally and now lives in Craftsbury. He found the Butler's Pantry job ad attractive because of the daytime hours, the starting hourly wage and the bonus, he said.

He was determined to earn that bonus. One mid-October morning before dawn, he drove the first few miles to work, only to realize that his 2009 Subaru Legacy had a flat tire. It was too early to ask anyone for a ride, he said, so he jumped on his motorcycle and sped through a rainstorm in near-freezing temperatures to get to work.

"I was adamant about not missing a day," Meister said. "Maybe I'm trying to restore the name of the dishwasher," he mused, before adding, "I need the work. I need to keep my word." He received his $1,000 on January 1. "The bonus was huge," Meister said. "It enabled me to get an apartment, to fix my car."

While money is critical, Meister said that finding a good job is about more than that. Restaurant kitchen dynamics, he noted, can involve drama, egos and power struggles. "It's a matter of finding the right people," he said. "This is a good kitchen."

Zoe, a 2013 New England Culinary Institute graduate, heads the kitchen team, though she said there are no titles. Nor are there any overly fancy culinary school flourishes on the Butler's Pantry menu. "We keep it simple, homemade stuff," she said. They grind whole pork butts for the maple sausage. Ferrante, "the potato master," preps all the home fries from scratch, Zoe said. House granola is flavored with nutty browned butter, maple and vanilla.

The couple gets up around 3 a.m. to drive from their Morrisville home and start prep by 4:30 a.m. Zoe is usually on biscuit duty, which means mixing, shaping and baking about 200 buttermilk biscuits a day.

Those fresh, flaky biscuits are featured in the signature biscuits and gravy ($13), breakfast sandwiches ($6 to $9) and eggs Benedict ($15) blanketed with housemade hollandaise. Cut into "sticks," the biscuits also star in a twist on French toast ($13.50), invented by Ferrante, and as a crunchy garnish to the excellent spinach breakfast salad ($15). The latter is amply larded with bacon, caramelized onions and feta, then topped with a pair of poached eggs and a warm maple dressing.

Another signature menu item (which I wish I'd tried) is the cheddar-jalapeño pancakes served with two eggs and hollandaise ($13). They were invented by a high school student who started as a dishwasher and worked his way up to cook before heading off to college. "He was always throwing stuff in pancakes," Zoe said, with a laugh. In this case, sliced pickled jalapeños and some shredded cheddar proved a winning combination. "The cheese gets all crispy," Zoe said.

By around 6 a.m., Zoe said, she begins to set up the egg station, where she makes omelettes and poached and fried eggs. The kitchen goes through 360 eggs on a busy weekend morning. Its record on a summer Sunday with expanded outdoor seating was 420 customer orders. "That was a rough day," she said.

The pandemic has posed challenges, but it has also pushed the Birons to think hard about how to manage the business in a way that works for them. Paul said they are thankful for federal and state grants that "kept us alive." To give the small staff more time off, the restaurant is now open five days a week instead of daily, and it closes at noon instead of 1 p.m. Income is down some, but so are costs. "Everyone's happier. That's what's important," Zoe said.

As for Meister, the dishwasher, "he is definitely dedicated," she said. "He's still showing up."

And as for me, when I'm next in Stowe, I plan to stay downtown and head to Butler's Pantry for an order of those cheddar-jalapeño pancakes.

The original print version of this article was headlined "Upstairs, Downstairs"