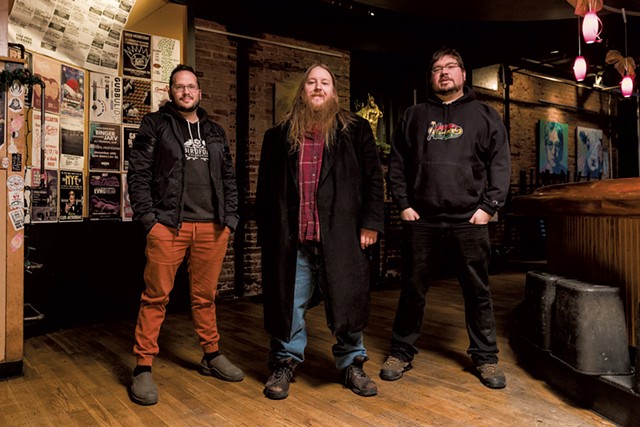 The first thing to know about the new Seth Yacovone Band album, Shovel Down, is that it's not a blues album. In fact, Yacovone has felt pigeonholed as a blues artist for most of his career. Gaining renown as a teenage blues-guitar prodigy will do that. He dropped "Blues" from his band's name years ago, in order not to limit himself and to potentially explore new avenues.

It's been eight years since Yacovone put out a record. The long gestation period can be mostly attributed to financial limitations. His last album, Land of Split Decision, was a mammoth, 18-track double album featuring 11 other musicians. And his wallet took the brunt. Shovel Down is all power trio, all the time. Aside from vocals, it's guitar, bass and drums. That's it.

After Split Decision, SYB's lineup shifted, solidifying in 2013 as a trio with longtime drummer Steve Hadeka and bassist Alex Budney. In 2015, those two purchased 12 hours of recording time at Burlington's Signal Kitchen as a birthday present for Yacovone. The band had one day to track the album, and the results are staggering. The new record explodes with mind-bending, hair-metal guitar solos and gut-punching vocal wailing.

Yacovone fears that every album he puts out will be his last, though he currently has a trove of unreleased material.

"If someone gave me $100,000 right now, I could put out 10 albums," he says. Though he's unlikely to find such a benefactor, it's a good bet that this is not the last SYB album we'll be hearing.

SYB celebrate the record release on Saturday, December 17, at Nectar's in Burlington. Seven Days recently sat down with the band for a deep listen.

The album begins with sonic crusher "Playing Patterns." A hard-edged heel-stomper, the track signals the album's lean toward rock music, as opposed to the looser, bluesy jams on Yacovone's earlier albums.

"It's about predetermined roles in our lives that we're expected to play, even as much as you try to get away from going in projected routes," Yacovone explains.

Instrumentally, the band took a more literal take on the patterns theme.

"I'm doing this paradiddle thing [on the drums]," Hadeka says. "I wouldn't have played it like that had it not been called 'Playing Patterns.'"

A bluesy throwback to Yacovone's roots, this track's inspiration comes from one of the more disturbing news stories to come out of Burlington in the last few years. It loosely refers to an incident in which a man armed with only a shovel was fatally shot by police — though its lyrics are meant to be somewhat ambiguous. Yacovone conceived the lyrics piecemeal, recording bits and pieces as they came to him while driving.

"Killing people so you can get what you want and control people seems a little barbaric and backwards," says Yacovone.

Budney joins Yacovone on the song's gravely, grizzled bridge, chanting, "I've got the wherewithal of a Neanderthal."

In another laid-back number, the band leaves plenty of space around Yacovone's vocals during the verse. His musings are bookended by hard riffs and descending, fingerpicked melodies.

This song title refers to Yacovone's own ears and the abuse he's put them through over the years. But that's more or less a tongue-in-cheek afterthought. It largely stays with the same thematic thread as "Caveman Guerrilla" — questioning our tendency to hear only what we want to hear and blindly, or deafly, assert our will.

"A Question Mark to Answer" 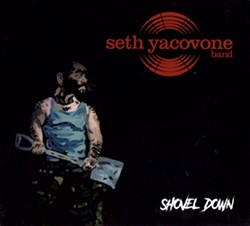 The longest song on the record allows Yacovone the space needed for a fiercely epic guitar solo. It rises and falls, swells and recedes, ultimately reaching a badass pinnacle unmatched throughout the rest of the record. The track was done as one live take, with no overdubs.

Though it's easy to get lost in Yacovone's solo, Budney's solid bass licks flourish with fine details that deserve a closer listen. Yacovone and Hadeka dub Budney the band's glue.

The song suggests that life's mysteries are what make it worth living.

"We're all going to be confused for a long time. You're never going to put your finger on 'it,'" Yacovone quips.

Yacovone conceived a good chunk of the material for Shovel Down on a 2013 solo retreat to the Tomhegan Wilderness Cabins in northern Maine. Sequestered far from civilization, he entered a fevered, hypnotic week of songwriting.

"This song was written in an intense, burrow-down session at Tomhegan. And I never came up for air," says Yacovone. "When I got done, I was like, 'Did I just waste five hours doing the worst thing I've ever done? Is it just crap?'"

Far from crap, it is a bold departure for Yacovone. It lands squarely in heavy metal territory, propelled by its driving bass line and ominous chord progression. It stands out as the most physically demanding song on the album, especially for Hadeka.

Also, snakes! Lots and lots of snakes! Yacovone suggests listeners not take the lyrics literally and admits they are probably wildly inaccurate from a naturalist's perspective. David Attenborough was not consulted.

"The Violent Stain of My Bleeding Heart"

Yacovone improvised the entirety of this song's lyrics in one take. He never even wrote them down.

"[We] want a peaceful, free existence, and when it's taken away from others, it will actually drive us to violence. It's this endless cycle," Yacovone explains. He refrains from delving too deeply into the stream of consciousness that birthed this dramatically titled track.

The song features a first for SYB: full-band vocal humming!

We've arrived at the only bona fide slow jam, and at just the perfect time in the album's progression. Yacovone has always been fascinated with track lists, how they come together and the journey on which they take the listener.

"By having the other songs be not slow jams, this one does have a nice, airy quality when you listen to the whole thing in a row," says Yacovone. It also gives the listener a rest before the record's eighth and final track.

(Technically, there is a ninth track, "Just Open the Door." It's a bonus track listeners get as a download when they purchase the vinyl, and it's not considered to be part of the actual album.)

Yacovone wrote this song for the late, great Lou Reed, who died just before Yacovone ventured out to Tomhegan.

"He just broke down so many walls. He did not give a fuck — ever," declares Yacovone.

The song was written on the last night of his sojourn and "rips off" the Velvet Underground's "White Light/White Heat."

"It's a purposely derivative sound," says Yacovone. Hadeka and Budney shine in their roles as background singers.

Fun fact: After Yacovone finished writing and recording the demo, he accidentally erased the whole thing. So, like a true rockstar, he swallowed his shame and did it all again.