Did Orleans Cops Break the Law in an Armed Drug Raid? A Federal Lawsuit Aims to Find Out 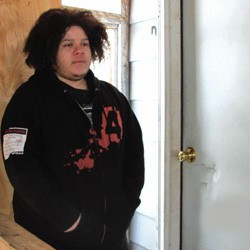 Nicholas Coburn was pouring himself a drink in his Barton apartment last fall when, he says, police kicked in the door, stuck a shotgun in his face and started tearing his house apart, looking for drugs. Only later did authorities realize their mistake: They had the wrong address — and the wrong guy.

The search warrant was for a 170-pound white guy named Richard Poginy, whom police suspected of dealing marijuana from an apartment at 89 Lake Street in Barton. Coburn is a 270-pound African American who rents an apartment from his brother at 89 Main Street.

What’s more, the sheriff’s deputy who applied for the search warrant had arrested Poginy months before, after a traffic stop for loud exhaust and a cracked windshield. Poginy had pot in the car, so police took him in and wrote him up, describing his physical features as “white male, brown hair, hazel eyes.”

Nonetheless, Coburn says he was handcuffed for at least a half hour while police, accompanied by drug-sniffing dogs, tore up carpets, removed cupboard doors and rifled through his dresser.

Coburn says police should have known “the second they saw me” that he was not the suspect named in the search warrant and left his apartment.

“I took a little bit of street law in high school, and I know my rights,” Coburn tells Seven Days. “I asked, ‘What’s going on? Do you have a warrant for this?’ I didn’t actually see the warrant until they left.”

That botched raid on October 29, 2010, is now the subject of a federal lawsuit that claims the cops violated Coburn’s constitutional rights to be free from illegal search and seizure. Coburn is suing Orleans County Sheriff Kirk Martin, Deputy Sheriff Daniel Locke and three unidentified officers — a state police trooper, a federal border patrol agent and a federal immigration agent — who apparently accompanied the sheriffs on the raid. He is seeking compensatory and punitive damages in the suit filed in U.S. District Court earlier this month.

Twenty-one-year-old Coburn, who has no prior criminal record, says the encounter left him rattled and bruised but not seriously injured. He says he is familiar with Poginy but maintains that Poginy never lived at Coburn’s address.

The search of Coburn’s apartment did turn up illegal drugs — some pot, a bong and a small marijuana plant — but he wasn’t criminally charged because the improper search made the evidence inadmissible, says Coburn’s attorney, David Sleigh, who is one of the state’s most accomplished public defenders.

Court records reveal that Locke, the sheriff’s deputy, relied on a confidential informant who told him of being at Poginy’s residence — identified as 89 Lake St. — and seeing two ounces of marijuana broken up and packaged for sale. The same source said Poginy had a stolen chrome-plated handgun. Locke’s search warrant authorized cops to search Poginy’s person, apartment and any duffel bags or knapsacks in his possession.

Sleigh argues that doesn’t excuse the police officers searching the wrong address or explain why they remained there as long as they did. “Once you’re in there and you see you’re wrong, you should probably lower the guns and leave,” Sleigh says. “When someone applies for a warrant, they have an obligation to have specific and reliable information.”

Locke did not return a phone message seeking comment for this story. Martin, the Orleans County sheriff, was not available, according to a receptionist in the sheriff’s office.