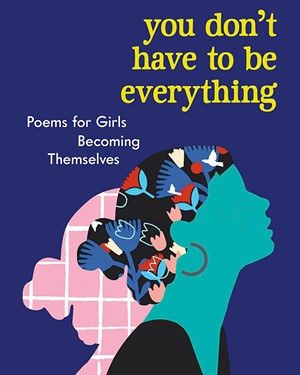 For Brattleboro poet Diana Whitney, the poetry anthology You Don't Have to Be Everything: Poems for Girls Becoming Themselves was decades in the making. "In some ways, I've been working on it since I was 13," she said in a recent phone interview.

As a young, closeted, queer teenager, Whitney found herself in a cycle of depression and self-loathing. When she got the opportunity in adulthood to edit a book of poetry aimed at girls and young women, it was a chance to explore poems she might have needed to read as a teen.

"It was both to share that experience of sadness, loneliness and shame but [also] to rage against shame and really share the message of 'You are enough,'" said Whitney, now 47.

You Don't Have to Be Everything, released in March, features 68 poems by as many poets. The authors are prominent scribes such as Maya Angelou and Mary Oliver, young stars such as Amanda Gorman, and those who rose to prominence on Instagram or YouTube, including Nikita Gill and Sarah Kay.

Whitney wanted to showcase both the "grand matriarchs" of poetry and modern writers who are finding new ways to reach young audiences.

"Within the literary world, there can be discouragement of Instagrammer, online poets, and I really wanted the project to push against that," Whitney said.

She read and gathered poems for two years for the anthology, drawing on her four years as a poetry critic for the San Francisco Chronicle. The most practical consideration was cost, including republishing fees, which were higher for poems by more popular poets.

Intersectionality was another major focus. Whitney, who is white, estimated that about half the poets represented are Black, Indigenous or other people of color, and one-third are LGBTQ, including transgender poets.

"If this book is about finding the courage to become ourselves, I felt like almost no one can show us that more than these trans poets," Whitney said. "Whether or not that experience of gender is one that a reader is going through, those lessons and emotions are there for all of us."

She admitted that she identified some of her own blind spots in the process. A writer friend's queries reminded her to seek out poets with disabilities.

Whitney included one of her works in the collection. Titled "Wanting It," the poem reflects on the performance of young womanhood and the sheer kinetic energy of growing into a changing body and adult desires. It begins:

Wasn't I beautiful, wasn't I desperate,

didn't I give a shit about world peace, inner peace,

spelled out in lip gloss on the locker-room wall?

The collection also includes works by Vermont poets Rage Hezekiah, Alison Prine and Bianca Stone. Hezekiah, in a poem titled "On Anger," wonders, "What if anger, / my armor, is embedded in the marrow / of who I am."

For Whitney, gathering the poems was an opportunity to delve into her own tumultuous and formative teenage years.

"Reading the poems [while] thinking about how that teen self would've responded and trying to remember what I was reading — it's been a process of healing, and I'm really grateful for that," she said.

Now Whitney has her own daughters, ages 13 and 15. She's shared copies of the book with them but doesn't know whether they've read it. Regardless, Whitney said, they influenced it as she sought out "the poems that I hope my daughters will read."

Being a teenage girl, she said, is harder than ever amid the pressures of social media. But she's optimistic based on how readily today's young people accept those with different gender and sexuality identities. She wanted some poems in the book to reflect joy, confidence and maybe a bit of snark to contrast with the darker themes.

"Everything's intense and urgent, but then it can also be, like, really beautiful in those extremes," Whitney said of the teenage years. "And I see those moments for my kids — moments of elation or discovery."

The original print version of this article was headlined "Teenage Dream"

Speaking of Diana Whitney, You Don't Have To Be Everything

Poetry Diana Whitney You Don't Have to Be Everything