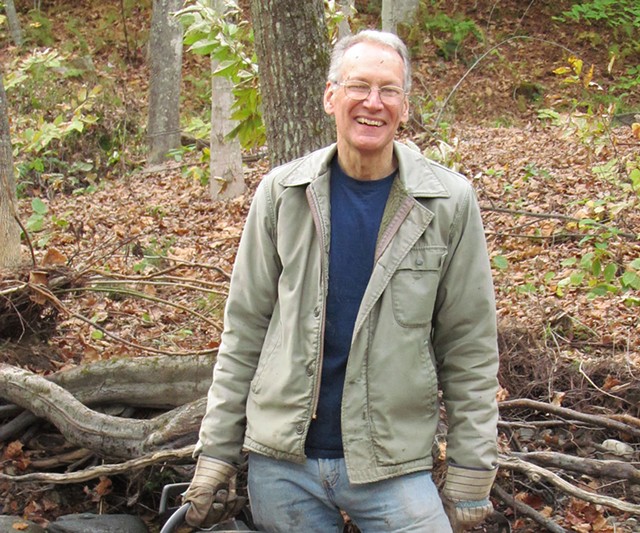 Newfane author Archer Mayor has penned an impressive 29 mystery novels — or police procedurals, as they're known in the trade — featuring Brattleboro-based cop Joe Gunther and his team of detectives in the fictional Vermont Bureau of Investigation. The latest, Bury the Lead, is out now, and Mayor has just sent the next installment to his editor; readers will have to wait until fall 2019 for that one.

As is typical of Mayor's immensely readable stories, Bury the Lead features several crimes that overlap. There's a murder whose confessed perpetrator is not credible, and a rash of arsons and other mayhem involving a major food-distribution business. Chances are, all these events are linked. What's more, one of VBI's main characters, Willy Kunkle, is out of commission with a surgery that affects the investigations as well as his colleagues, his family and Kunkle himself.

Fans of the series may be even more concerned about the implications for future books than about the crimes at hand. That's because Mayor, 68, has so indelibly created his cast of characters and their relationships — not to mention the places where they live and work — that, to some readers, they may seem almost real. Mayor addressed the series' future and other concerns in a recent phone interview.

SEVEN DAYS: One of the pleasures of reading your books is following the lives of your characters over the years. While the core cast has been the same, you've introduced new ones from time to time, and brought secondary ones — such as medical examiner Beverly Hillstrom — into more prominent roles. I'm curious about your process of developing these relationships, and how far in advance you plot them out.

ARCHER MAYOR: [I don't plot them out] at all. I lead a spontaneous life — my personal life is dictated by a pager. [Mayor is an EMT and a death investigator for Vermont's Office of the Chief Medical Examiner.] I let these guys evolve in my head for each book pretty much as you spend time with your friends.

SD: In your new book, Bury the Lead, you sideline complicated detective Willy Kunkle. Unbearable pain in his damaged arm requires that he get surgery — and confront his history with drug addiction. I don't want to spoil anything for people who haven't read the book yet, but are you setting us up for a profoundly changed Willy going forward?

AM: No. We go right back to where I started. [I'm] Mr. Tabula Rasa, cruising around wondering what's happening next. I met a guy who said, "You might want to keep in mind, Willy's injury doesn't stop there. [He] could experience excruciating pain." This gave me a whole segment of the book. This pain pushes [Willy] right up to the edge. It's not an efficient way to conduct business, but I wouldn't change any aspect of it.

SD: A question about the title of this book: The word "lead" has different meanings and two pronunciations. The most obvious meaning comes from my profession, journalism, but given the genre, it's easy to also think of lead from a gun. Did you intend the reader to make these associations, or was this just fun wordplay on your part?

AM: Yes, I did [intend that]! I have a background in journalism, too — it was a phrase as familiar to me as it is to you. It's my job to bury the lead. I've probably been at this too many years; I've become a little puckish. My editor said [of the readers], "They're going to screw this up." I said, "So what? I write murder mysteries."

SD: You probably get this question all the time, but are your characters, or their traits, based on any actual people you've known or observed?

AM: I have to own up to one thing. My daughter Elizabeth put her finger on it years ago: "Oh, Daddy, are you still answering the question 'Are you Joe Gunther?'" [He's] everything I look to as the poster boy for the kinds of things I'd like to see in myself and others. [But] my daughter said, "Am I the only one on the face of the earth that knows you're really Willy Kunkle?" [Laughs.] But I love Willy's honesty — there's a lot of things about him I like.

AM: I concur. We all carry around a lot of baggage. When shit hits your head, it's how it hits you, not what it's made of. That's what makes us capable of choosing right from wrong, good from bad. Where does empathy come from, if not from constant exposure to human suffering?

SD: Your work as a death investigator, firefighter, EMT and cop has no doubt given you a broad knowledge base to draw from in your writing. But have these experiences influenced your actual storytelling, and if so, how?

AM: Helpfully, constructively, thoughtfully. If you do some of these things as I've done them for as long as I've done them, you develop a drinking habit. [Laughs.] But I've got an outlet: fiction. I've now retired as a cop, but the medical examiner [job] has gotten stronger. It's symbiotic: The writing is where I sort it all out, in the guise of a murder mystery. I'm writing with readers in mind — I imagine them as cocreators.

SD: Bury the Lead is your 29th book, which is pretty remarkable. When you set out on this path, did you imagine you'd still be doing it 30 years later?

AM: Good lord, no! Hey, I'm American. I was deluded with capitalistic dreams.

AM: Yes. [Laughs.] I had a familiarity with the realities of publishing. You think of Stephen King and think, Oh, you're a writer, you're a millionaire. I think of this as a job. I'm a realist; I'm making a living at this.

SD: Some writers of series have set themselves a target number of books, and then they're done. Do you have any number in mind, or do you plan to just keep writing as long as you can?

AM: Yes [to the latter]. If some Hollywood agent makes an offer of $5 million, I'd say yes. But I spend everything I make, because I don't make as much as people think. Therefore I write for a living.

This series of books is not a mechanical issue to me. I know I'm not James Joyce, but these books matter to me. I will always give it my best effort. You [readers] deserve that. It's important to be a relevant storyteller of our species — of our aspirations and shortcomings. That's why I write.

SD: Have you or an agent tried to shop Joe Gunther as a TV or Netflix series or the like?

AM: Oh, sure, that's an ongoing effort. I take this really seriously — I try to make an effort to honor the contract, to market [the book], etc. A number of deals have come and gone. Frankly, right now I'm at my most hopeful; I've met a young man who might produce something. I think a series is preferable. I think I wrote a series.

SD: It's fun to think about who might be cast in these roles.

AM: Oh, isn't that cool? Half of the people I've imagined have died of old age.

SD: I've wondered whether people would find it too hard to believe that all these bad deeds could take place in pristine, progressive little Vermont.

AM: I concede my body count in fiction exceeds Vermont's. But I can't say that about problems other than homicide. Vermont hasn't always been so bucolic. With people comes conflict.

SD: You've been a sort of shepherd of these characters who, for loyal readers, have become almost real. How has it changed you, as a person, to have them in your life?

AM: That's interesting. I don't know if it's changed me, but I do have a responsibility. They evolve, they have babies, they have children coming of age. I have to develop them. I'm as curious about them as everyone else.

SD: Thinking back over several decades as a writer, has anything surprised you?

AM: I suppose, yes, I think the biggest thing that surprises me is how relevant all this came to be. I tend to be a self-deprecating guy; I was grateful just to be kept alive. As [the series] went on, the mission changed: to write a story of human nature. I see my role as having a more thoughtful direction. I pay attention [to the fact] that readers want this series to go on.

The original print version of this article was headlined "Leading Man"