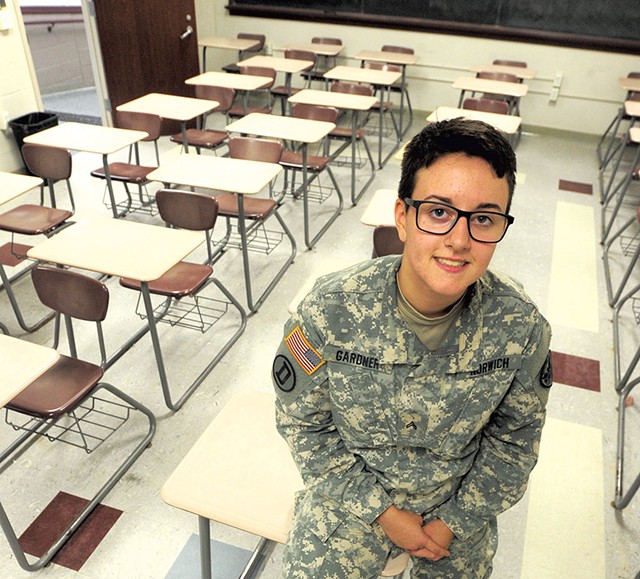 Luka Salvatore has wanted to join the Marines since age 9. The Cincinnati native's grandfather, father, uncles and brother all served in the military.

Until recently, the senior cadet at Norwich University in Northfield, the nation's oldest private military academy, was poised to follow suit. Upon graduation, Salvatore intended to train at a police academy and sign up for the Marine Corps Reserve.

"The United States Government will not accept or allow ... Transgender individuals to serve in any capacity in the U.S. Military," Trump wrote. "Our military must be focused on decisive and overwhelming ... victory and cannot be burdened with the tremendous medical costs and disruption that transgender in the military would entail."

Salvatore, who is transgender, described his immediate reaction to the tweets as a "freak-out." He was somewhat reassured the following day when Gen. Joseph Dunford Jr., chairman of the joint chiefs of staff, made clear that the policy wouldn't change until the White House provided more guidance.

That came on August 25, when Trump signed an order making the ban official for new recruits but giving Secretary of Defense Jim Mattis leeway to decide how to address transgender members already in the military. Confusingly, the president also suggested he was open to revoking the ban, if presented with a convincing argument. Mattis, who has until February 21 to draft a permanent policy, clarified that transgender troops can continue to serve and receive medical treatment — for now.

In the meantime, several lawsuits have been filed against the ban, and a bipartisan group of Congress members has introduced legislation to overturn it.

No one knows how many people the policy change could affect. A 2016 study by the RAND Corporation estimated that, worldwide, between 2,000 and 11,000 transgender people serve in the U.S. military.

Closer to home, Adjutant General Steven Cray expressed uncertainty about how many transgender individuals serve in the Vermont National Guard.

"It's not a demographic that is tracked or recorded necessarily," he said. "But I do believe ... that we do have members that are transgender." He added that he doesn't know any of them personally.

Cray declined to weigh in on the ban but said he thinks the Vermont Guard is welcoming toward transgender members. "It's a family, and we have to treat everyone as such," the general said, noting that all Vermont Guard members continue to participate in trainings on transgender issues.

Trump's muddled policy pronouncement leaves military aspirants, including Salvatore, in a state of uncertainty. "If that opportunity gets taken from me, it will be a big loss," Salvatore said matter-of-factly. "My whole life I've wanted to serve my country."

He's not the only one at Norwich who stands to be affected, although it's unclear just how many transgender military hopefuls attend the school.

Daphne Larkin, the school's spokesperson, said in a statement that Trump's move "does not impact Norwich policy." Larkin explained that because the university is a private military school — not a public military academy, such as West Point — it doesn't have to follow military protocol.

Approximately 1,600 of the 2,400 students at Norwich participate in the Corps of Cadets — the school's military training program — and 35 percent of the student body typically chooses to enlist following graduation, according to Larkin.

Title IX regulations require that schools receiving federal money treat students equally, regardless of gender identity. And, Larkin said, "We take seriously our responsibility to provide a safe and nondiscriminatory environment for all students and employees, including our transgender students and employees."

The 2017 Norwich University Student Rules and Regulations handbook states that accommodations for transgender students will be made on a "case-by-case basis." Cadets planning to transition are to notify the university's Title IX officer and "must be aware that, once they have identified their preferred gender, the university will recognize that commitment and gender identity in regard to all standards and requirements and requires a reciprocal commitment from the individual."

Salvatore, who also serves in Norwich's Marine Corps Reserve Officer Training Corps, said school leaders have been supportive. "Three days after those tweets came out, vice president [of enrollment and student life Frank] Vanecek actually called me. He addressed me properly and was saying that this doesn't change anything for the school," Salvatore recalled. "I've had people as high as gunnery sergeants say, 'I stand by your right to serve.'"

"It meant a lot — this school that I've loved for so long, staying by my side," he said.

Salvatore, who started telling friends he was transgender at the end of his freshman year, said he never wanted to be the "token trans cadet." At the time, he didn't know of any others on campus.

Norwich has a reputation for openness. In 2011, cadets at the school convened the first meeting of the university's Lesbian, Gay, Bisexual, Transgender, Questioning and Allies Club, the night before the repeal of the "don't ask, don't tell" policy, which had prevented LGBT people from serving openly in the military. The club garnered national headlines at the time, and again in 2012, when it held the school's first gay pride week, culminating in a queer prom.

Last year, Norwich altered its uniform regulations to accommodate an incoming Muslim student who'd been told by South Carolina's Citadel military college that she couldn't wear a hijab there.

Still, transitioning is never easy, and it's especially complicated on a military campus that still abides by rigid gender standards. Male and female cadets follow different rules governing how they cut their hair, what they can wear and even how they cut their nails. ("Males will keep nails trimmed so as not to extend beyond the fingertips. Females will not exceed a nail length of ¼ inch, as measured from the tip of the finger.")

Salvatore, whose dirty-blond hair is neatly cropped, according to protocol, said he didn't encounter problems adapting to the male dress code — "I taught myself how to tie the [neck] tie in the corps standards" — or meeting male fitness requirements.

Other aspects of the transition weren't so easy. Cadets are assigned roommates of the same sex all four years. He requested a male roommate for his sophomore year but was assigned to bunk with two females. "It was awful," said Salvatore, who ended up moving in with a female friend. For additional privacy, they put up a partition in their room.

Leading up to his junior year, the cadet again requested to room with male students, but when school resumed, Salvatore recalled, "I come to my room, and there's two females in my room. It was awkward. I didn't know what to do."

He moved into a room by himself until the school finally gave him a male roommate — a friend of Salvatore's, who had assured school administrators he was comfortable with the arrangement. Larkin said the school accommodates students' roommate requests, regardless of gender, as long as the roommates agree to live with one another.

When Salvatore started taking hormones, he used the men's bathrooms — but only when they were empty. Gradually, though, he noticed that no one seemed to care when he was in there. "One time I woke up late and went in and brushed my teeth. The lieutenant colonel was in there, and he was just like, 'What's up?'"

Partway through college, Salvatore learned that several lowerclassmen were also transgender. "My friends were making jokes, like, 'Look what you started.' And I was like, 'Good! That was my intention,'" he said.

Tony Gardner, a sophomore cadet from Watertown, Mass., came out as transgender the September of his freshman year at Norwich, and the school's commandants have been "pretty accommodating" during his transition, he said. No one objected when he requested a male uniform.

Which isn't to say there hasn't been a learning curve. "One of my staff sergeants just wasn't picking up on the new pronoun," Gardner said. "The whole transgender thing is fairly new at Norwich."

As a high school junior scouting colleges, Gardner had two criteria: "I knew I wanted to do something with the military, and I wanted to play hockey."

He is taking courses to prepare for the U.S. Air Force in the hopes that he can follow in his grandfather's footsteps after graduating.

Gardner won't start taking hormones until December, a step he postponed because National Collegiate Athletic Association rules would have required that he play hockey on the men's team. He still follows the female physical fitness standards, rooms with women and uses women's bathrooms — arrangements he said he's comfortable with for now.

"All of my friends that I have up here are super supportive," Gardner said. Since coming out, "I've never had anyone come up to me to do anything or say anything to make me change my mind."

He deemed Trump's announcement "not a cool move."

In its wake, students are taking steps to make the campus more welcoming.

At 7 p.m. on September 14, roughly 30 students — some in camouflage uniforms, others wearing jeans and T-shirts — filled a classroom for the first meeting of the NU Alliance, a student club for "lesbian, gay, bisexual, transgender, queer, intersex and asexual" students.

One of the organizers, Daniel Almueti, a laidback senior from Oklahoma, leaned against the chalkboard at the front of the room. He explained that the school's LGBT club had fallen apart after his freshman year, when its founders graduated.

Noting that the "culture isn't always very positive for people in the LGBTQIA community" on campus, Almueti, who is bisexual, told the packed room that he was resurrecting the club to provide a supportive place for those students.

During introductions, both Gardner and Salvatore identified themselves as trans males, which seemed to surprise no one.

At one point, conversations grew loud. Sitting atop one of the desks, Salvatore slapped his palms against the surface. "Hey, hey, if you guys have to yell, it's kind of too loud," he gently admonished the group of mostly younger cadets.

Later, when asked about Trump's transgender ban, Almueti responded, "It's a step backwards whenever things like this are announced, but I believe that's why we organize. What influences people more than words is action." And, he went on, "If you have trans people out there being good role models in the community, you're gonna gain more support."