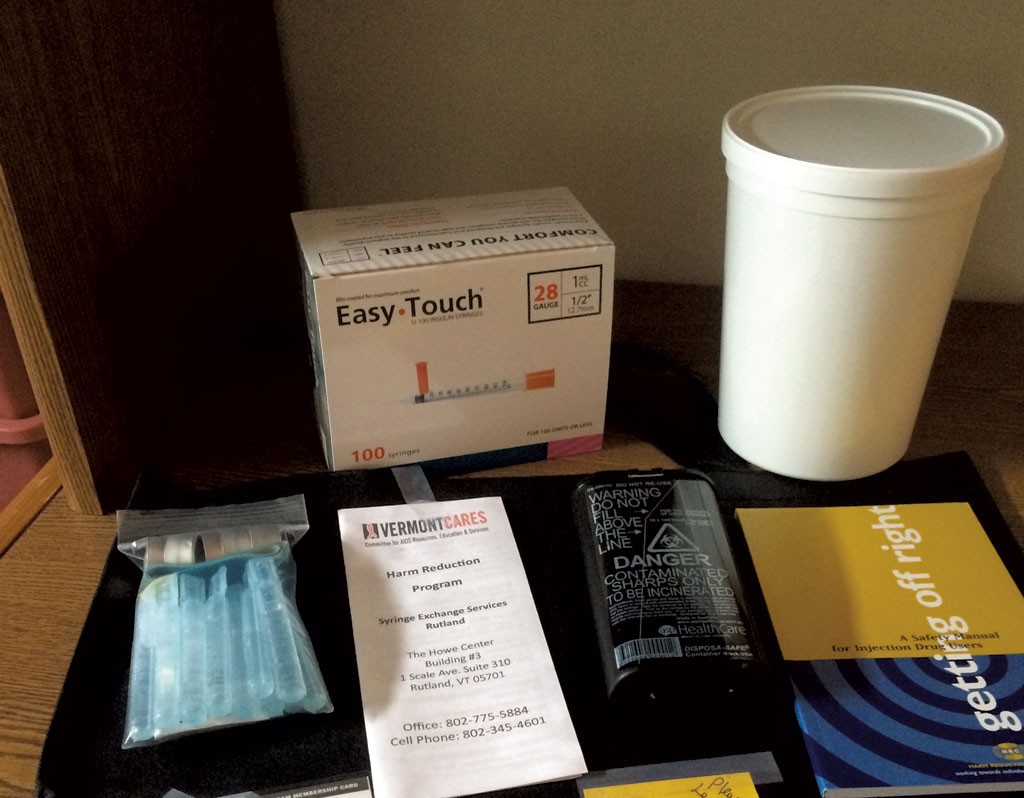 The front line in the fight to prevent new cases of HIV and AIDS in Vermont can be found inside a third-floor room in a butterscotch-colored building a short walk from downtown Rutland.

Every Wednesday from 9 a.m. to noon, Mary Kathryn Charbonneau welcomes intravenous drug users who come to exchange used needles for 100-count boxes of new ones, plus other supplies such as alcohol wipes, tiny tubes of sterile water and cotton filters. Sharing needles and having unprotected sex are the primary ways the HIV virus is spread.

Charbonneau, in white capris and a tunic top with glasses perched on her carefully coifed head, bustled around the room arranging supplies in baskets on a wooden table and stacking boxes of syringes on the shelf of a nearby hutch. "I'm glad I got my supplies in," said the regional coordinator and sole staffer for the Rutland office of Vermont Cares, a nonprofit group that has been helping people with HIV and AIDS since 1986. "I had only three boxes of 30s," she said, referring to the thickness of the needle most in-demand among her clients. Thinner needles are less painful but more likely to clog.

Her first client arrived at 9:50 a.m. — a pony-tailed middle-aged man in shorts and sandals. He dumped what he said were 200 used needles into a red bin already half full of capped sharps. Charbonneau didn't count, but explained later she has a good eye for the number of needles people bring to exchange. She gave the man two boxes of new needles and asked if he needed other supplies.

The next client, clean-cut in jeans and a T-shirt, said he had lost the card he is supposed to show at each visit. Clients remain anonymous but must fill out a questionnaire that allows Charbonneau to probe their understanding of safe drug use, their status in terms of HIV and hepatitis C — another illness that can be spread by needle-sharing — and their interest in treatment options. Charbonneau makes them cards with IDs, using a formula that includes part of their mother's first name, their birthdate, middle initial and sex.

This thirtysomething man said he was returning 500 needles, noting he hadn't been in for a month or more.

"You don't come from Addison County do you?" Charbonneau asked as she made his new card. "We do it up there now. I'm letting people know."

Charbonneau has worked as a case manager for Vermont Cares since 1993. She currently has 27 clients, all diagnosed with HIV, who she helps with health care, housing and whatever else they need. In the beginning, she said, she was helping people have a good death. "I have seen so many people die. I never forget them. They are in my heart," she said, her voice quavering. "Now it is very, very different." That's because treatment breakthroughs allow those infected with the virus to live long, near-normal lives.

The needle exchange is a new part of her job. "I wasn't sure I was going to be able to do this." Charbonneau admitted. She paused because a young woman with a brown ponytail entered with needles in white plastic canisters — half hers and half her boyfriend's. The woman, who presented both their ID cards, seemed in a hurry. She kept asserting she had returned at least 600 needles, but accepted just 400 from Charbonneau. She loaded the boxes and other supplies into red cloth bags that she brought.

Charbonneau resumed her comments as the door closed. "I felt like I was enabling people to use, but now that I have done it, I can see I'm reducing the risk of HIV and hep C."

Vermont Cares' Rutland needle exchange has operated for two years and serves about 200 people. The organization launched its first walk-in exchange in 2002 in St. Johnsbury. In addition to its two fixed-time and -place programs, it also offers exchange services in the Montpelier area and Franklin in and Grand Isle counties by appointment.

Advocates in the trenches have worried recently that the spike in opiate use in Vermont could cause an explosion of new infections. They have reason to be wary.

"One of the things we are all thinking about is what has been happening in Indiana and Kentucky," said Tom Dalton, coordinator of the Safe Recovery program at the Howard Center in Burlington. In one rural county in Indiana near the Kentucky border, 169 people were diagnosed with HIV in the past six months — all intravenous drug users. The area used to see about five new HIV diagnoses in a year. Indiana didn't allow needle exchanges, but the governor has declared a state of emergency to allow temporary exchanges.

Sally Cook, a public health nurse in infectious disease at the Vermont Department of Health, spent two weeks in Indiana in May, responding to a call for help from her Indiana counterparts. Her assignment was to locate and meet with people who had been named by those who tested positive for HIV as intravenous needle or sexual partners. "We did counseling and testing in the field," Cook said. "When I was there, it was an urgent activity to find the named contacts."

"It is a concern," Vermont's state epidemiologist Patsy Kelso said of the Indiana outbreak. "Will we start seeing an increase in HIV and hepatitis C because of injection drug use? We are going to keep a close eye on that."

To date, the state hasn't seen any uptick in the number of cases, Kelso said. New diagnoses of HIV and AIDS in Vermont have ranged between 11 and 30 annually for the past 20 years, according to the Vermont Department of Health. Since 2005, between one and four of the new cases each year have been attributed to intravenous drug use. At the end of 2014, the health department reported 665 people with HIV or AIDS living in the state, with one-third residing in Chittenden County.

"Syringe exchange is part of the safety net to prevent what they are seeing in Indiana," Dalton said. His office on Clarke Street in Burlington is upstairs from a needle exchange and HIV-testing site. The state's first exchange, it opened in 2001. It often sees 80 people a day, but not everyone is exchanging needles, Dalton said. The syringe program has 3,768 members who make nearly 12,000 visits a year to get new needles and other safe-injection supplies.

A framed plaque of hand-painted tiles just inside the entrance to the Vermont Cares office in Burlington tells the old story of HIV and AIDS. Most of the people who painted those tiles have died, the receptionist said. The disease burst onto the public stage in the 1980s, felling young, previously healthy gay men with cancers and pneumonias. It also struck intravenous drug users and hemophiliacs. Scientists identified the virus and modes of transmission by the end of the decade, but an effective treatment wasn't available until the mid-1990s.

Today, HIV and AIDS are "extremely treatable," said Peter Jacobsen, Vermont Cares executive director, who added: "But the medication is not cheap and it is not easy to take." Still, most insurance carriers cover treatment.

Jacobsen said successful treatment has created a new challenge — apathy about the risks associated with HIV and AIDS. A generation has come of age that never saw the ravages the virus can cause. They see little reason to worry about getting it, given the effectiveness of today's medications, Jacobsen said.

A 53-year-old South Burlington man who has had HIV for 21 years shook his head to think that anyone would risk getting the disease. "I wish I was free and clear," said the gay man, who didn't want to be named because he is looking for work, and having HIV still carries stigma.

Wearing shorts, a sleeveless shirt and a chunky gold necklace, the man shared his story over a cup of coffee at a Dunkin' Donuts. He said he contracted the virus from a sexual partner who failed to disclose his infection. He was tested for HIV while being treated for an unrelated ailment. The man recounted his horror when he got the call at work that he was HIV-positive. "I didn't believe it," he said.

He was lucky, though. His body's immune system kept the virus in check for more than 15 years. "I didn't take any medication until four years ago," he said. He has undergone blood tests to monitor the virus every six months since his diagnosis.

His HIV status changed his love life. When he would reveal he had HIV, prospective partners would walk away, he said. He stopped trying. "I wasn't going to get involved to get turned down," he said.

He didn't tell his family about his HIV status. "I didn't want to burden them," he said. However, shortly after he started on medication, he became depressed and required psychiatric care. He revealed his secret to his family, who rallied to his support. "That means everything to me," he said.

Jacobsen at Vermont Cares believes it is possible to reduce the number of new HIV cases to zero by 2020 — something no state has achieved. This summer, Jacobsen plans to enlist other organizations that work on HIV and AIDS to commit to this goal. "We mostly have a handle on this," he said. "It doesn't feel really daunting."

"I think it is possible," Dalton at Howard Center said, but added, "If you want to get to zero, we have to have really strong supports, especially for people who have the biggest challenges."

Treatment is critical to prevent HIV from spreading, Dalton said. Medications suppress the virus, greatly reducing the chances of transmission even with unprotected sex. "With HIV, if you don't maintain that treatment, it is going to come back," he said.

Epidemiologist Kelso also supports the goal of zero new cases but cautioned against thinking it would be easy.

"If we are relying on syringe exchanges to prevent HIV and hep C outbreaks, I think that is shortsighted unless we put in a lot more resources," Kelso said. The state receives $900,000 in federal funding for HIV and AIDS work, but none of that money can be spent on needle exchanges. It pays for medical case management and helps patients pay for medications, nutrition and mental health counseling. The state Department of Health allocates $100,000 for HIV and AIDS prevention, all of it for syringe exchanges.

Back in Rutland, Charbonneau, who sees her job as a calling, is doing her part by reaching as many people as possible with clean needles. If people call to say they can't get to the office by noon on exchange day, she said, she waits. Noting that many intravenous drug users don't have cars, she said she meets them at more convenient locations and conducts the exchanges from the trunk of her car. She explained, "I don't want people using dirty needles."