Despite Fewer Passengers, BTV Is Weathering the Pandemic

Gene Richards had been looking forward to celebrating Burlington International Airport's 100th birthday this month. The facility's aviation director had scheduled an air show featuring World War I-era planes and the modern-day F-35 fighter jet. History buffs would take in a 90-minute documentary about the airfield's evolution, and a national conference was expected to draw as many as 400 airport directors to the area.

That was before the coronavirus pandemic, which has turned BTV's banner year into a major bummer. Boardings have taken a nosedive after reaching a 10-year high in 2018. The once-crowded parking lot is now glaringly empty, and, on a recent weekday, just two people waited at a Transportation Security Administration checkpoint. The birthday bash has been postponed until next summer — assuming the pandemic is over by then.

"Things were looking up," airport commission chair Jeff Munger said, "but since the pandemic, I don't know where we are."

Burlington isn't alone in its flight plight. Stay-at-home orders, travel bans and a newfound fear of flying nearly wiped out air travel in the pandemic's early days this spring. U.S. airlines carried 96 percent fewer passengers in April 2020 than in April 2019, the largest year-to-year drop ever recorded by the federal Bureau of Transportation Statistics. At BTV, passenger numbers plummeted to 1,448 that month.

Yet there are indications that BTV is pulling out of the dive. In early April, the Burlington airport received an $8.7 million grant, part of a $10 billion federal relief package for airports affected by COVID-19. Bookings and flights, too, have ticked up ever so slightly after three slow months.

The coronavirus era is the most turbulent challenge in the airport's century-long history, but Richards and other city officials believe BTV can weather the storm — they're just not sure how long the storm will last.

"We're facing an enormously disruptive economic event with this pandemic, and I don't think any of us yet fully know the scope of that and whether we've really hit the bottom," Burlington Mayor Miro Weinberger said. "There's a lot of reason to be confident that once we get through this, there will be some return to normalcy."

The airport's 100-year story is bookended by global pandemics. The third wave of the so-called Spanish flu had just subsided in the summer of 1919 when three men scouted out the South Burlington cornfield that would become the airport. Burlington leased 72 acres for $100 and built a runway with the city's horse-drawn grader and steamroller. By the time the first plane landed there on August 14, 1920, the influenza pandemic had killed 100 million people worldwide, including more than 2,100 Vermonters.

"We started this in the same type of times we are [in] today," Richards said. "People even back then felt a need for an airport."

The airport survived the Great Depression and, in the 1940s, received New Deal funding to improve its runway and expand its footprint. Today, the airport covers 942 acres in the city of South Burlington, an arrangement that has long been a source of tension.

The suburban city had little say in recent decades as Burlington razed dozens of homes as part of a controversial noise-mitigation program. Last year's arrival of the Vermont Air National Guard's F-35s has fueled even more furor among residents in both cities who say the jets are too loud.

The commercial airport had gotten busier, too. By the end of June 2019, boardings had increased 16 percent since fiscal year 2017, topping out at 693,208. This January, the city reported that airline service out of Burlington was expected to jump 5 percent in the coming years, aided by expanded nonstop routes to major hubs in Charlotte, N.C., and Atlanta.

The coronavirus put a stop to that. The airport's other moneymakers are suffering, too. Business is dismal for the seven car rental agencies, which normally gross more than $25 million every year. The airport's cut of those profits typically exceeds $2.3 million, more than 10 percent of its total annual revenues.

Concessions earnings are down, too. Only one of three Skinny Pancake restaurants is open; ditto Hudson News stores. Fewer cars in the parking garage means less ticket revenue. And the 108-room Fairfield Marriott hotel that was supposed to break ground in July — a lucrative lease for the airport — is now on hold.

To counter the losses, the airport has delayed plans to spend $300,000 fixing up the parking garage.

BTV is not making any money, but Richards isn't too stressed.

"I'm naturally enthusiastic no matter what," he said. "You could throw me in boiling water, and I'd find a way to cool it down."

Weinberger said the airport is better positioned to survive this downturn than the financial crisis a decade ago. The city was still reeling from the Great Recession when Richards came on board in 2013 and BTV's credit rating was in the toilet. Richards recalled that the airport had just one day's worth of cash on hand when he started. Within a year, he built up cash reserves and balanced the budget, elevating the airport's credit rating to investment grade from an abysmal junk bond status.

Since then, Richards has diversified BTV's revenue streams, such as by renting space on a commercial property it owns on Williston Road to Mirabelles Bakery and other shops, all of which are open during the pandemic.

The airport now has more than 400 days of cash on hand, and Richards expects another round of relief funds for airports.

"I don't believe that the [Federal Aviation Administration] or federal government is going to let all the airports go to hell," Richards said. Between grants and cash reserves, "I daresay we could weather two and a half years of this," he added.

In order to receive the federal funds, the airport had to keep its 52 workers on the books. Weinberger said the city hasn't furloughed any employees so far, something he's hoping to maintain.

"If we saw a sustained downturn that impacted airport finances, you'd have to look at making cuts that we haven't yet," said Weinberger, who served as an airport commissioner before he was elected mayor in 2012. "In terms of the initial shock of the pandemic, I think we're in pretty good shape."

But no one can predict when people will feel comfortable flying again. After September 11, 2001, the number of passengers in the skies didn't rebound to pre-terror attack levels for three years, according to a U.S. Department of Transportation study.

Munger says he won't fly until there's a working coronavirus vaccine. Fellow commissioner Helen Riehle, the South Burlington city council president, however, hopped on a plane to Detroit last week — with a mask suctioned to her face. 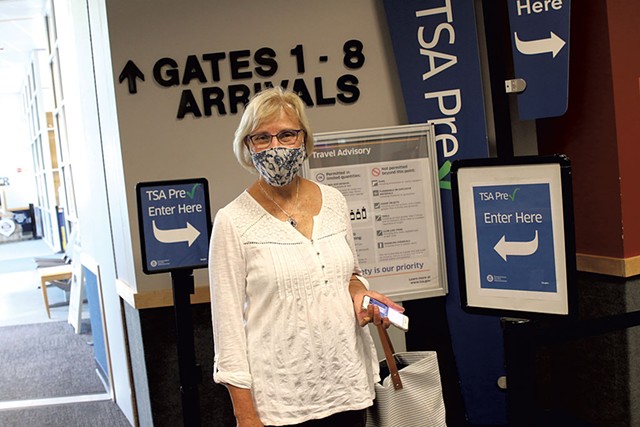 "I haven't seen my daughters or granddaughters since Christmas," she said before her trip to Salt Lake City, Utah. "I'm cautious about flying. I don't think I'll be flying out every week."

At age 94, Ed Colodny is one of those still flying. He caught a plane from his winter home in Fort Myers, Fla., to his summer residence near Washington, D.C., in early July. The retired U.S. Airways CEO grew up in Burlington and says his early memories of the local airfield inspired his career in aviation.

He's seen the airline industry survive spikes in the price of jet fuel, worker unrest and the 9/11 attacks — none of which was as prolonged as the pandemic. Still, Colodny thinks BTV will survive.

A city report published in January estimates that BTV supports nearly 5,000 jobs in the area and creates more than $481 million in economic activity, including $141 million in tourist dollars every year.

City Councilor Jack Hanson (P-East District) thinks the pandemic has shown that Burlington and Vermont as a whole are over-reliant on tourism. He wants leaders to pivot to a more sustainable economy — one that is less dependent on air travel.

"The focus [should be] creating that local resiliency rather than trying to pump up the amount of people flying into Burlington during a climate crisis and during a pandemic," Hanson said. Using coronavirus funds to bail out airlines and airports is "the exact wrong approach right now," he added.

The Progressive city councilor has also criticized Weinberger's net-zero energy plan, which aims to eliminate the city's fossil fuel use by 2030. When Weinberger announced the plan in September 2019, he did not include emissions caused by air or rail travel, saying instead that jet exhaust is a problem "that cannot continue to be neglected and ignored by the federal government."

Hanson, who gave up flying in 2015 to reduce his carbon footprint, agrees but thinks the pandemic presents an opportunity to "think bigger" about the city's future.

Richards, for his part, is just taking things one day at a time. The airport has done what it can to try to make air travel more appealing — and safe. Temperature screening devices scan passengers as they deplane and exit the terminal, and hand sanitizer dispensers are plentiful. Staff disinfect high-touch areas up to eight times a day.

The airlines, which are just as beleaguered as the airports they serve, have assured Richards they will continue flying to Burlington.

"I'm optimistic we're gonna come out of this stronger than ever," he said. "I'm feeling quite young for 100."

Correction, August 25, 2020: Due to an editing error, a previous version of this story misidentified Colodny as a former commercial pilot.

The original print version of this article was headlined "Staying Aloft"