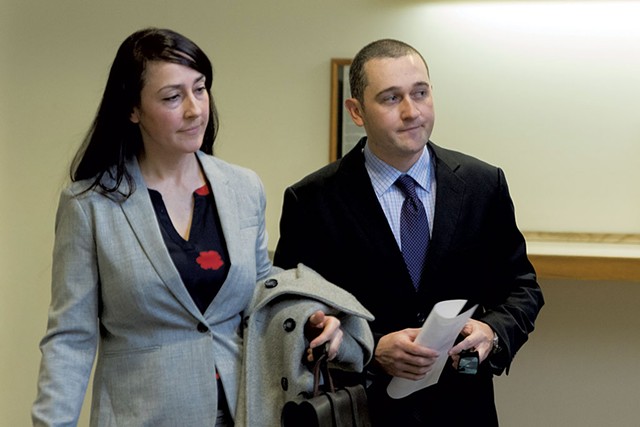 Faced with contradictory narratives about when their police chief learned that one of his officers had punched a handcuffed woman in the face in March, St. Albans city leaders say they have no plans to figure out who's telling the truth.

Chief Gary Taylor has maintained that he didn't know sergeant Jason Lawton had slugged Highgate resident Amy Connelly until the American Civil Liberties Union of Vermont requested footage of the incident in late May. Taylor said he then opened an internal investigation and referred the case to the Vermont State Police two months later.

Lawton was arraigned on a charge of simple assault last month. That prompted the release of a criminal affidavit showing that corporal Paul Morits, who recently retired, told state police investigators in August that he alerted Taylor to the footage the day after the incident.

City officials have responded to the discrepancy with a collective shrug of their shoulders.

"It's very hard for me to justify what would be a very embarrassing thing for the city and the city council over this one person coming forward," Michael McCarthy, a city councilor and state representative, said of opening an investigation.

Councilor Jim Pelkey, a former lawyer who now manages the Franklin County Civil Court, suggested that Connelly herself could find out — by suing.

Other officials deferred to city manager Dominic Cloud, saying the council should not get involved with personnel matters, even under exceptional circumstances.

"Where do you draw the line?" asked Mayor Tim Smith. "If you think this is an exception, what does the next person think? How many of these conversations will we get into on a weekly basis?"

If the buck stops with Cloud, an investigation is unlikely, because the manager has been attacking Morits' credibility.

"Paul [Morits] in the department was a shit-stirrer," said Cloud, launching the first volley in what has become a smear campaign. In several recent phone interviews, Cloud described the 16-year cop as an Eeyore — Winnie-the-Pooh's gloomy donkey friend — who "fails to inspire the confidence of others" and has "never been happy with anything."

Cloud also accused his former employee of previously "cry[ing] wolf," though he couldn't provide any specific examples. He questioned why Morits didn't raise a red flag sooner, saying that if anyone deserves to be investigated, it's Morits.

"He had all kinds of access to me, the mayor and the city council," Cloud said. "To drop this bomb on your way out the door — frankly, it's a cowardly action that isn't credible."

"[He's] the one who said he knew and didn't do anything," Cloud added, disregarding that Morits says he did let Taylor know.

Morits has dealt with heat from the bosses before: The former corporal previously served as the union representative for St. Albans' officers and said he remained involved in labor matters even after leaving the post. The role often pitted him against the bosses, he said, especially Taylor.

"If I see something wrong, I'm going to bring it to someone's attention. [The chief] didn't like that," Morits said.

After retiring on November 15, Morits joined the Franklin County Sheriff's Office as a deputy. But while he was still on the St. Albans force, Morits said in a sworn statement that he saw several officers watching video of the altercation when he arrived for his shift the morning after it happened. He said he told the chief later that day that he should watch the video.

Morits said he's been taken aback by city officials' reaction to what he told the state police investigators who probed the allegations against Lawton.

"I'm pretty upset about the way they're treating me," he said. "I just tried to do the right thing."

The response from city leaders has come as no surprise to resident Elaine Robtoy, who witnessed the council's deference to Taylor during an August meeting. Robtoy showed up fully prepared to grill the top cop about the Lawton case. But Mayor Smith cut her off after several questions and told her the venue wasn't appropriate for an "interrogation." The experience left her with little faith that her elected officials want to know the truth.

"They just want everything to go away," she told Seven Days.

Franklin County State's Attorney Jim Hughes said he would be worried "if there were any real suspicions" that Taylor lied. But while it would be "nice to know" exactly when the chief found out about the Connelly incident, Hughes said he doesn't believe the timing is that "consequential" — nor does he see how an investigation would turn up anything new.

After all, he said, it's not like someone hasn't already looked into it.

Who, exactly, Seven Days asked, was he talking about?

Either way, "there is nothing but one officer saying that he mentioned something," and that's not enough evidence, Hughes said.

"I don't think that that will happen," Hughes said. "But it's fair game if somebody wants to do it."

Hughes also confirmed plans to prosecute the assault charge against Connelly for allegedly kicking Lawton in the shin — because it's alleged to have happened seconds before he slugged her — in addition to her disorderly conduct and unlawful mischief charges from an earlier bar incident.

Meantime, Hughes has been notably uninvolved with Lawton's case since it first made headlines in August. The prosecutor told Seven Days that he had removed himself from the case early on because of a conflict of interest, explaining that he had a "professional relationship" with Lawton and "felt like it was a little too close," which is why the Attorney General's Office picked it up.

But Attorney General T.J. Donovan contradicted that claim last month, when he told reporters that he believed Hughes had declined to prosecute the case. Charity Clark, Donovan's chief of staff, said last week that the AG's Office stands by the statement, noting that prosecutors have seen none of the paperwork usually filed when a prosecutor has a conflict. Hughes later said he talked to state police investigators about his conflict.

Given Hughes' indifference about Taylor's timeline, the next logical choice to investigate would be Donovan. But the AG has shied away from such probes before, declining to investigate whether the Bennington Police Department appropriately handled former lawmaker Kiah Morris' claims that she'd been racially harassed. In that case, Donovan urged the town to hire an outside investigator.

Citing its ongoing criminal case against Lawton, the AG's Office declined to comment on the matter.

Taylor has accepted some responsibility for how long he says it took him to find out about the Connelly incident, though he has deflected much of the blame toward a "flawed" policy that he said relied too heavily on supervisors to self-report when they used force.

The policy required that a frontline supervisor review each report. The policy's flaw, Taylor told the council in August, was that it allowed Lawton to sign off on his own report and evade detection.

The department has since implemented a new policy that requires command-level administrators to review all use-of-force cases within 48 hours, Taylor said. The changes, which went into effect in late June, also require that any misconduct be reported directly to the chief, he said.

Using the public records law, Seven Days obtained data logs for the department's body cameras. They show that Lawton uploaded the footage on the night of the incident and watched it twice the next morning: once at 5:23 a.m. and again at 5:47 a.m. That jibes with Morits' statement to investigators that he saw several officers watching the video in Lawton's office when he arrived for his 6 a.m. shift.

The only other person to view the footage that day was Cpl. Trevor Sargent, the department's use-of-force instructor, according to the data logs. Cloud, the city manager, said Sargent did not notify command staff because he knew that Lawton, his superior, was filing a report about the incident.

Lawton, through his attorney, declined to comment for this story.

Seven Days also requested "response to resistance" reports dating back to January. The department withheld Lawton's report on punching Connelly on the grounds that it's part of an ongoing criminal matter.

But a review of 17 other such reports shows that the Connelly incident was not the only time Lawton used force this year. Acting as a supervisor, Lawton signed off on two other incidents involving his own actions as cop, including one in which he reported using a "jaw hook" escort and a "body check" takedown on a 47-year-old woman.

The sergeant was also accused of becoming physical with someone while investigating a domestic dispute in April, two weeks after the now infamous punch, according to a civilian complaint filed with the department.

"We had words. I pointed, he ordered me not to point my finger at him and [told me to] leave the room of the house I own," said the complainant, whose name is redacted. "He actually put his hands on me."

It doesn't appear that Lawton ever filed a "response to resistance" form about the encounter, nor is it clear whether he faced any discipline; a handwritten note at the bottom of the report says, "Multiple meetings with chief and LTs along with several phone calls." But Lawton remained on duty for another two months.

Now that he's out of the picture, city leaders say they are focused on improving the department. They say Taylor remains a vital part of those efforts.

"Lawton didn't reflect the values of this organization," said Cloud. "Chief Taylor does."

Any lingering questions about the chief's timeline will continue to threaten the department's standing, however, because it erodes the public's trust in the police force, said Jay Diaz, the ACLU of Vermont staff attorney who first requested the Connelly footage. That's why, Diaz said, it's in the best interest of both the city and its residents to investigate when Taylor found out.

Robtoy agrees. She said she hopes other citizens will call on their public officials to hold Taylor accountable.

"If you can't trust him, who can you trust?" she asked.

The original print version of this article was headlined "Nothing to See Here | St. Albans leaders shrug at suggestion that police chief knew about assault earlier than he said"