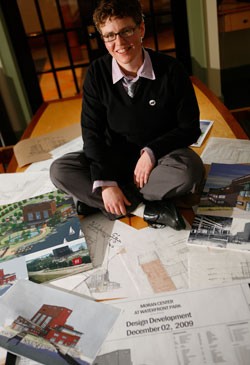 Missa Aloisi was just 9 years old when Burlington’s coal-fired Moran Plant was decommissioned in 1986. Now, 23 years after the plant produced its last megawatt of electrical energy, she is tasked with bringing the old building back to life.

That’s no small job, considering the fate of the 38,000-square-foot building has been the subject of 91 public meetings and two ballot questions between 2005 and 2008. In the years since the plant’s decommissioning, ideas abounded about what to put in its place — a wood-chip boiler, a brewery, a concert hall, a baseball stadium, a museum and the YMCA. For reasons of cost, practicality or the confines of the Public Trust Doctrine, which limits the building’s potential adaptation to cultural, educational, recreational, governmental, wharfing and railroad purposes, none of those proposals panned out.

But in 2008, city residents voted to affirm a plan that would convert the Moran Plant into a recreational climbing venue, a community sailing center and a children’s museum. Finally, after years of public debate over the hulking holdover from Burlington’s industrial past, its future was secured.

The project currently involves renovation of the existing structure as well as new construction; it will also encompass skateboard parks, a splash park/ice skating rink, a public terrace, a fire pit and a rerouting of the bike path. Shortly after the public vote, Aloisi, a 32-year-old intern architect at the Burlington firm Freeman French Freeman, was brought on to manage the plant’s redesign.

Aloisi’s appointment as project architect, or the day-to-day overseer of the Moran Center plans, is nothing short of monumental for this young professional. It is the first large project for which she has been responsible in her nascent career. And, in the male-dominated field of architecture, it’s historically significant that a woman should be orchestrating the renovation of one of Burlington’s major buildings. Ruth Freeman, one of the founding partners of Freeman French Freeman and the first female architect in Vermont, would be proud.

Though Aloisi has done much of the ground-level design work on the project and is considered the project architect, she is not yet a licensed architect. She’s still working toward completing the licensure process, which is particularly rigorous in her field, involving three years of training plus a three-day exam.

Alex Halpern, a partner in the firm, is technically the project manager. But it is Aloisi who has dedicated most of her working hours to the plant’s rehabilitation, says her boss, FFF president Jesse Beck. “She is the full-time worker bee,” he explains.

Aloisi, who lives in Montpelier and sits on the city’s Planning Commission, came to Vermont in 2008 after a stint in California, where she designed a net-zero-energy house for a fellow architect. With a newly minted master’s degree from the University of Oregon, the Massachusetts native shopped around for architecture firms.

When Aloisi interviewed with FFF, the state’s oldest architecture firm, its partners enticed her with the prospect of the Moran renovation, for which they had successfully bid in late 2008. “They dangled the Moran project in front of me. I had my eye on that building for years,” Aloisi recalls. “I said, ‘You have that project? I want to work for you.’”

Aloisi’s close-cropped, sandy brown hair and rectangular spectacles lend her an air of seriousness befitting someone charged with overhauling a primary anchor of the Burlington waterfront. She’s modest when speaking of her responsibilities on this project and workmanlike in her description of the designs. For Aloisi, the project is equal parts thrilling, nerve wracking and inspiring.

Before she could put pen to paper to do a rough sketch, Aloisi had to determine the size of the structure with which she and her team at FFF, including intern architect Evan Champagne, would work. That involved literally sizing up the building with a tape measure. It was a process Aloisi says she hopes never to repeat. “It was full of pigeon shit. It was gross,” she recalls.

Once the team knew how much space was available, Aloisi needed to understand the tenants’ needs. FFF is in charge of designing the core and shell of the Moran Center, a job that includes maximizing tenant space to be as cost-effective as possible. Aloisi says it took four rounds of designs to get the current tenants to “buy into the plan.”

Filling the building is still a work in progress. Ice Factor, a Scottish company with plans to build an indoor adventure center, has signed a memorandum of understanding solidifying its tenancy, as has the Lake Champlain Community Sailing Center. < ahref="http://www.gmcm.org/">The Green Mountain Children’s Museum had signed the same agreement but recently backed out due to financial constraints. The city is currently looking for one or more tenants to occupy the remaining space, says Kirsten Merriman Shapiro, special projects manager for Burlington’s Community and Economic Development Office, which is coordinating the project for the city.

The plan, as Aloisi describes it, is to showcase the original plant and embrace its history — given that the Moran Plant is considered a historic structure. She suggests it will have a layered quality: “You see the new construction as new. But eventually that peels back to show the existing building,” Aloisi says. “Adaptive reuse projects can be the most exciting. You want people to see the history, not just cover it up.”

One thing about the existing building that will not be preserved is its dirty-energy past. The $20.6 million Moran Center will function according to the ideals of sustainability and social responsibility, which Aloisi says lie at the core of her architectural principles. But she’s quick to add that this project isn’t about “greenwashing” or seeking LEED certification just for the appearance of being “green” — a term she abhors.

When Aloisi speaks of “sustainability,” she isn’t talking about rainwater catchment systems, rooftop gardens or other “green building” buzz words. For her, she says, the term refers not just to tools and methods but to the intention behind them. Aloisi cites examples of corporate “sustainability” that fail the intention test. For instance, it doesn’t matter if Ford’s renovation of its Dearborn Truck Plant includes a “living roof” to help heat and cool the building when the company still manufactures low-gas-mileage vehicles that contribute to global warming. And The Gap’s energy-efficient corporate offices in California could not be considered sustainable as long as the company doesn’t pay its employees a living wage or exploits workers in developing nations. Of sustainability, she concludes, “You can’t stop with materials or things on the façade. You have to ask, What’s going on in the building? What does the final result achieve?”

The Moran Center meets Aloisi’s own strict sustainability criteria. “Because the idea of sustainability goes beyond the quantifiable parts of the built environment, it is important to pay attention to the intangible aspects of the project and the impact these can have on the community,” she wrote in a recent memo outlining the project’s “sustainable initiatives.”

One sustainable aspect of the project, she points out, is its recognition and appreciation of the embodied energy present in the existing Moran Plant. Rehabilitating the site rather than demolishing it preserves the energy that went into the original construction. That choice also keeps a huge amount of material out of the waste stream.

Among the other sustainable initiatives are passive solar/ventilation, a gravel wetland and vegetated swales for storm-water management, public access and transparency, lake-water heating and cooling, and livable wages. Aloisi wants the Moran Center to stand as an example of true sustainability rather than pay lip service to it. “When people think of architecture, they don’t think about public access and livable wages,” she says.

But Aloisi does, and that has helped guide the design process. Because the building is publically owned, it is important to the city that Aloisi’s design makes the public feel welcome. In the most recent rendering, a glass entry leads to a fourth-floor public terrace that Aloisi says is “symbolic of access and transparency.” With regard to sustainable wages, the city is bound to pay everyone working on the construction of the Moran Center — the renovation will create nearly 645 jobs, estimates CEDO’s Shapiro — in accordance with its livable wage policy.

The city’s requirements for the space have also been paramount in the design process. Taking that brownfield site and redeveloping it for a modern purpose while retaining a sense of its history matters to the city, says Shapiro. “We needed the design to allow for all the programming to happen, but not obliterate the historic value,” she says. “The people at Freeman French Freeman have been good at listening and internalizing all of that and putting it into a package that works for everyone.”

Ideally, the city would like to see shovels in the ground by fall 2010, and the Moran Center open to the public by the end of 2011. Shapiro says she’s happy with the progress so far and exudes cautious optimism about the project’s future. That has a lot to do with the efforts of Aloisi, whom she calls a “real pleasure to work with.”

Feedback, too, has been positive so far: The Vermont chapter of the American Institute of Architects recently honored Aloisi and her firm with the People’s Choice Award and the Excellence in Architecture Award for the Moran Center designs. While Aloisi was pleased, she says she’s still finding ways to make the design better.

Like many architects, she expects to be retooling the project in her head well after construction is finished. “We look at our work and say, Oh, my God. I did that?” Aloisi says. “You’re never done designing.”