Derek and the Demons, Underground 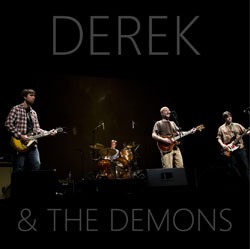 Vermonters, like a lot of other people, are often guilty of thinking that their state is the center of the world. Likewise, many Burlingtonians figure their home turf to be the “city upon a hill” ideal, what with its history of socialism in city hall and its current climate of nonstop progressivism. In both cases, Vermonters feel like they’re the envy of the country, if not the world.

While Burlington may indeed be the state’s cultural hub, it is hardly its only artistic wellspring. Take for example, Windsor, the former capital of the Vermont Republic, and home to the musical collective and pseudo record label What Doth Life, where three years ago, four men with global ambitions formed a rock-and-roll band. These men (Derek Young on guitar and vocals, Chris Egner on drums, Kiel Alarcon on guitar, keyboard and saxophone, and Brendan Dangelo on bass) became Derek and the Demons, a traditional-sounding rock band with pop, jazz and world-music influences. Now, with Dangelo replaced by Davis McGraw, Derek and the Demons have released on the world (see: Vermont) Underground, their second full-length and their third record overall.

Throughout its 10 songs, Underground forms a solid, if slightly nontheatrical release. Unlike its billing tags of “global” and “country,” Underground is mostly a bluesy rock record that time after time exposes its rough edges. That does not mean that the lyrical content of such songs as “Better Way” or “Windsor Nights” are hard-boiled. Rather, the sound of Underground itself — which was recorded live at Windsor’s WDL Basement Studios — is raw and sloppy. For Derek and the Demons, this was a smart move. The warm, mildly distorted fuzz of “Suicide Tat” and “Howl” give those songs a noticeable 1990s vibe, while the bright yet muffled tones on “Strange News From Another Sun” and “Perseverance” make those tracks perfect for those listeners who gave up on music after 1974.

Like a bad curse or a filthy entity that just won’t leave — anybody else see The Conjuring? — Underground will stick with you, especially in that part of your brain that remembers songs but not anniversaries or the names of acquaintances. “Perseverance” is a true-blue hit, while tracks like “Accustomed to the Rush” and the undeniably tough “One Second Heartbreak” will cause involuntary fist pumps. For the kids who don’t know, this is rock and roll. Underground is not only rock and roll, but it’s good rock and roll from an accomplished band.

Underground by Derek and the Demons is available at derekandthedemons.bandcamp.com.