Derek and the Demons, Rite of Passage 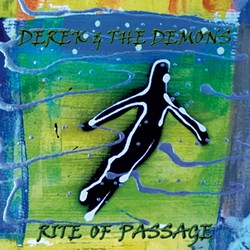 Derek and the Demons, an unrepentantly raw rock trio hailing from Windsor, have been quite busy since their inception in 2010. In addition to two EP releases, Rite of Passage is the band's third full-length album. The album also marks a whopping 61 releases for What Doth Life, a quasi-label and collective self-described as "a brand with nothing to sell." That's a lot of time in the kitchen, and the Demons have definitely got the recipe down. This is lean, honest music.

The trio's sound hinges on the guitar work of singer Derek Young. He fills the room with a high-precision wall of noise, transitioning from power-chord washes to searing lead lines. He often pulls off both so fluidly you'd swear another guitarist was in the session. Young is always exploring but never wandering or, Satan forbid, merely noodling. When it's time to solo, Young cuts a line somewhere between John Mayall and J Mascis — soaked in feedback but so melodic you can fairly sing along.

Rite of Passage fires up with the one-two punch of "Turn to the Blues" and "One More Chance," jangly blues-rock bruisers that complement each other nicely. The riffs are simple, the structures primal. But the band relies on dynamics to push and shape the changes, always poking at the edges but always locked into the groove.

Once things slow down, the rhythm section actually shines even more. One of the finest tracks on the album, "Crack in the Cosmic Egg," showcases everyone at their best. Drummer Chris Egner is brilliantly creative. Bassist Kiel Alarcon damn near channels Noel Redding — a propulsive counterpoint on the low end. The track also features one of Young's best vocal performances on an album where he too often defaults into a talk-growl instead of really opening up.

The album's only real weakness is the lyrics themselves, which tend to be rote and repetitive. Of course, for garage-rock revivalists like Derek and the Demons, that ain't a huge problem. Still, on later tracks — especially "Old Times" and "Kin" — it's hard not to notice how paint-by-numbers the songwriting can get.

The closing track, "Alone With Jodorowsky," works hard to change that impression. It opens up with a slow-burn vamp, spills into a playful guitar solo and doesn't even crank up the heat until the six-minute mark. After that, the song explodes into full-blown psychedelia territory. Despite being nearly 20 minutes long, it's a great ride that never gets boring or overwhelming — no small feat for a trio.

Recorded and produced by Alarcon, Rite of Passage is robust and balanced, a million miles away from the DIY dirt of early What Doth Life releases but still true to the same aesthetic. For both the band and the larger collective behind it, the album is a homegrown milestone that proves something special is brewing in the birthplace of Vermont.

Rite of Passage by Derek and the Demons is available at derekandthedemons.bandcamp.com.