Derek and the Demons, Out of the Woodwork | Album Review | Seven Days | Vermont's Independent Voice

Derek and the Demons, Out of the Woodwork 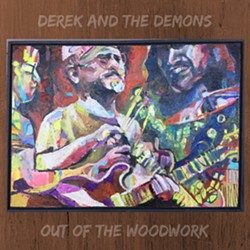 The ever-productive Derek and the Demons have returned with their new LP, Out of the Woodwork. For those keeping score, that's four full-length records and two EPs released since forming in 2010. Few local acts can boast such an impressive and consistent output.

Speaking of consistency, if you're familiar with the Windsor-based trio, there's not much new to see here — though that's not necessarily a bad thing. As on the band's previous records, Out of the Woodwork follows a tried-and-true template: three guys playing jam-flavored rock and roll. No huge stylistic shifts or production quirks — though there does seem to be less of a bent toward the psychedelic than on 2016's Rite of Passage. Singer and guitarist Derek Young plays it straightforward, as do his Demons. If nothing else, Out of the Woodwork is incredibly direct.

Opener "Late in the Fall" is a roots rocker with a laid-back groove at the verse and a chorus that just slightly picks up the pace. It sits firmly in the band's oeuvre like a worn-in shoe. Likewise, "Feel-Good Summer" comes from Derek and the Demons' comfort zone. It sounds like the band had a go at writing a crowd-pleaser for a jam-band festival. The chorus is ready-made for sharing a joint and sipping warm whiskey out of a plastic cup — and that's before the guitar solos start.

Young is a solid guitarist whose playing suits his band's style. Bassist Kiel Alarcón — who also produced the record — and drummer Chris Egner prove fitting complements to the bandleader. Derek and the Demons are a robust outfit, and they puff up when leaning toward more aggressive influences.

"All Comin' Back to Me Now" and "Food of the Gods" exhibit an edge that the Demons wear well — and should do more often. For example, "No Fool 4 U" suffers in contrast, with unfortunate lyrics such as, "She got too much attention, now she lives in another dimension / How can she be sane when the whole world wants her sex?" Lyrics are not Young's strong suit. He has a clear vision of telling a story, which is a fine trait. But the execution isn't always graceful.

The album's final four songs feature the ever-talented Break Maids providing backing vocals. The trio augments Young's voice with shimmering harmonies as beautiful as a full moon on a cold Vermont night. Alarcón has mixed their parts to sound like an ethereal chorus in a Greek tragedy. The women's voices float behind the action but are never lost or dull. The Break Maids' work on the barn burner "Look Out Now" is a particular high point on another solid effort from the Demons.

Out of the Woodwork is available at derekandthedemons.bandcamp.com. Derek and the Demons play a release party on Friday, April 7, at Windsor Station.

Speaking of Derek And The Demons, Out Of The Woodwork

Album Review Derek and the Demons Out of the Woodwork