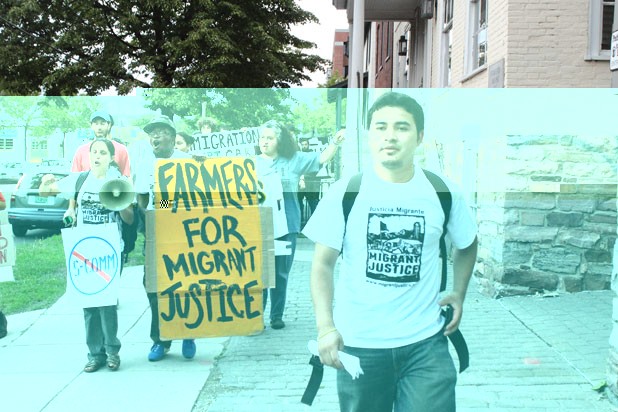 May 30: In May, Seven Days profiled Danilo Lopez, the 22-year-old Mexican farmworker who has become a prominent spokesman for migrants laboring on Vermont farms. Lopez began volunteering for the Burlington-based advocacy group Migrant Justice after a fellow farmworker was killed on the job in 2009. He became something of a cause célèbre after he was detained in a traffic stop and handed over to federal Border Patrol officers in 2011.

Even as he faced deportation, the undocumented Lopez publicly lobbied — at Statehouse hearings, press conferences and Occupy Vermont rallies — for state policies that would help his fellow farmworkers. He racked up one victory for migrant workers when Gov. Peter Shumlin revised state police policy to prohibit troopers from asking suspected illegal immigrants about their status unless evidence of another crime is present.

But federal immigration authorities looked less kindly upon Lopez: He faced imminent deportation unless the government decided to extend him a little-used form of leniency called “prosecutorial discretion.”

Update: Lopez is still in Vermont — but it’s unclear how much longer he can stay here. U.S. Immigration and Customs Enforcement denied his request for prosecutorial discretion last summer, and a federal immigration judge in Boston denied a motion by Lopez’s lawyer to suppress evidence gathered by authorities. That would be his confession to Vermont State Police during the September 2011 traffic stop, admitting he is here illegally.

His lawyer has now appealed the judge’s denial, meaning that Lopez is in limbo until that request is decided. It could happen soon or take one to two years, explains Brendan O’Neill of Migrant Justice.

In the meantime, Lopez and his allies scored another policy victory for farm workers: On December 12, a legislative committee in Montpelier cast a preliminary vote in favor of granting driver’s licenses to undocumented immigrants employed on local farms. The full legislature will take up the measure when it convenes in January. If he hasn’t been deported, Lopez and his allies will no doubt be there, pushing for its passage.