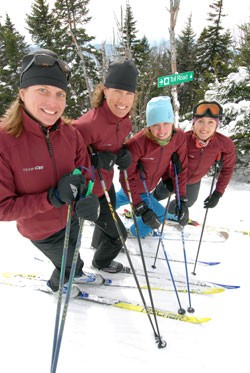 I’m no Lindsey Vonn, but I’ve been skiing since I can remember. I’ve successfully boarded and disembarked from hundreds of chairlifts and have made it to the bottom of countless trails intact.

So why, on a recent Saturday morning, am I standing nervous and knock-kneed at the top of one of Stowe’s easiest runs? I obviously look pretty pathetic, too, as a pack of plaid-clad snowboarders come flying down the ridge and spray me with snow. Then a gaggle of teenage girls — obvious first-timers with their tips pointed in an exaggerated snowplow position — passes me with an instructor.

The reason for my spooked state: I’m on the wrong skis. Two very skinny Fischer classics, loosely clamped to my boots by a tiny toe piece, are all that separate me from the snow. With no edges and barely any true nordic skills to get me down the mountain, I’m about to go downhill on cross-country skis.

So will some 500 athletes on February 22 for the 63rd running of the Stowe Derby. Ever since Austrian Sepp Ruschp and Norwegian Erling Strom decided to hold a race from the top of Mount Mansfield to the village of Stowe as a post-World War II challenge, the Derby has been a war for winter bragging rights. Now it attracts collegiate nordic superstars, Stowe locals and anyone else with the gumption to take on the test of skiing what’s billed as the nation’s oldest downhill cross-country race.

Although cross-country skis aren’t mandatory, they’re the equipment of choice, since the bottom leg of the course requires athletes to propel themselves on flat or slightly uphill terrain. On steeper bits, though, the nordic skis lend themselves to plenty of carnage, as racers whip around corners without the stability of alpine boots and bindings to keep them grounded.

The Stowe Derby has undergone a few changes since its 1945 inauguration. (For those counting, the race was not held in 1952 or 1953.) When a bridge went down at the Stowe Mountain Resort Cross-Country Center last year, organizers diverted the course to include a slightly more rigorous portion that also makes the race longer — 19 kilometers (nearly 12 miles) instead of 16k (10 miles). Every once in a while, weather conditions dictate further course adaptations.

Winners might cover those 19k in less than 45 minutes; stragglers take several hours to finish. At stake this year are not only endurance-athlete egos but also prizes from Rossignol, Nordica, One Way, Turtle Fur, Darn Tough and Holmenkol, plus Outdoor Research gear and a Concept 2 rowing machine.

Also this year, the Mount Mansfield Ski & Snowboard Club (MMSC), which organizes the Stowe Derby, has decided to up the ante for the alpine/nordic event by adding a team category. “People can enter the race with their friends and just have fun with it,” writes Pascale Savard of the MMSC in an email. “No need to be a super woman or man to have fun in the Derby.”

In the past, participants could choose among the long course, the short course (6k) and the Derby Meister, in which racers do the whole thing twice, first on skate-skis and then on classic skis. This year, the athletes can also enter as quartets in a panoply of categories, such as ones for teams using skate-skis with an average age of 40 and under; teams using classic skis with an average age of 40 and over, and so forth. “We needed something new to talk about to get people excited,” Savard explains.

The new rules prohibit short-course teams and mandate at least one woman per group. To give me a taste of the Stowe Derby — and a glimpse of an all-female team in training — Savard arranges for me to ski part of the course with the Outdoor Research (OR) Team, sponsored by the eponymous gear company.

The daunting athletic resumés of these women don’t make me feel any more confident about sliding down Stowe on my Fischers. Marina Knight, 31, raced for Stratton Mountain School and Williams College; she’s married to former U.S. Ski Team ace Chip Knight. Kristina Frame’s maiden name is von Trapp; the 38-year-old has competed in everything from 40-mile middle-of-the-night ski traverses in Colorado to synchronized skiing championships. Erica MacConnell, 30, is a four-time All-American NCAA champion in giant slalom. Carrie Nourjian, 56, spends her summers riding 100-mile bike races and her winters blitzing through the Canadian Ski Marathon, the Craftsbury Marathon and the Stowe Derby.

When Pascale describes the team to me in advance of our meeting, she uses words like “maniac,” “intense” and “competitive.” (Nourjian, one of the “intense” ones, isn’t able to make it today because she’s traveling.) But, as we all prepare to board the Lookout Double chair for the training run — getting plenty of funny looks from alpine skiers who must think we’ve taken the wrong turn for the Stowe Cross-Country Ski Center — I’m finding the OR team members mainly just helpful and reassuring.

“Don’t lean back,” says Knight, who’s done the Derby twice already. The first time, she says, “I flew down the hill praying that the end would come quickly; now I know it’s not going to.”

“Just remember: ankle flexion, knee flexion, strong stomach,” says Frame, who skied the Stowe Derby short course as a kid and competed in her first full-length race in 2003 after living in Colorado and Australia.

Several minutes later, I manage to slide off the lift without pitching face-first into the snow. Savard — the “fifth” team member who will fill in if one of the women can’t compete — leads the way to the entrance of the Toll Road.

Plenty of non-skiers know about the Toll Road: In the summer, cars can zigzag up the 4.5-mile unpaved road to the summit of Mount Mansfield. In the winter, it’s a gentle, winding beginner trail — for folks on alpine skis. For racers in the Stowe Derby, the Toll Road presents hair-raising hairpin turns and a vertical drop of 3000 feet.

“Oh, I can feel my heart beating hard already,” says Savard before we start skiing. “Bend your knees! Stay centered!”

I stick my butt out, wedge myself into the most aggressive snowplow position my hips and knees can handle, and start sliding down the Toll Road. Piece of cake. Instead of carving turns and relying on my ankles and edges, I figure out how to slide this way and that in a wedged position, and how to glide slowly to a stop. It’s tricky — and very taxing on my tush — but kind of fun. In fact, I stay on my feet all the way down until we cut over to the chairlift. Then — in full view of everyone up there — I totally biff it on my skis.

But I have it easy. During the Stowe Derby, the Toll Road will be clogged with throngs of other skiers (who are sent down in groups of five every 30 seconds in accordance with bib numbers), all desperately trying to hang on while taking the curves as fast as possible. There’ll also be a lot of laughter — not as painful as a spill, but draining.

Savard, MacConnell, Knight and Frame pause mid-run to point out “the corner of death” — where, they say, ski patrollers with ropes and netting stand poised to help racers who are tumbling out of control.

“But you just fall on people!” Savard says. “I pretty much fall three times every year at the same places. It’s really an easy race — if you want to go nuts, you can go nuts. There’s a million ways to do it.”