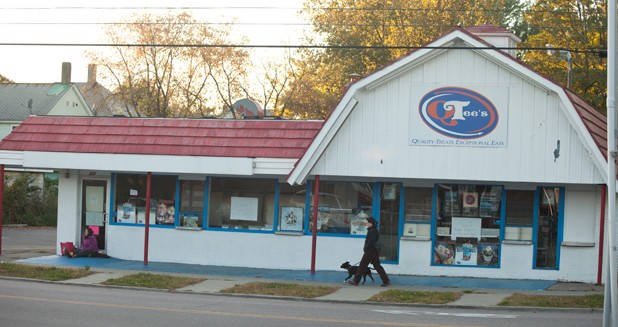 The vacant lot at Elmwood and North won’t be empty for much longer. The QTee’s on North Winooski Avenue could become a 28-unit apartment building with a store on the ground floor. A residential rental and retail project of similar scope is set to rise on the Bushey Auto Sales site, right across the street.

Change is coming to Burlington’s Old North End, sparking skepticism as well as enthusiasm among residents of an impoverished neighborhood with a strong community identity.

At least four market-rate housing projects are planned or under way in a Burlington neighborhood that for decades has seen almost no new private construction. As many as 85 rental apartments or condos could be built in the next couple of years, potentially easing the city’s acute shortage of residential units and perhaps reducing the rate at which rents have been rising beyond the reach of many Burlingtonians.

But this “wave of development,” as one Old North End activist refers to it, is also stoking fears of gentrification. Will some longtime residents eventually be driven out of a newly fashionable neighborhood they can no longer afford?

Those concerns were very much in evidence at last week’s combined Neighborhood Planning Assembly meeting for Wards 2 and 3, which together comprise the Old North End. Residential developers Erik Hoekstra and Dave Farrington made a case for their respective construction projects to about 100 local residents in attendance. They insisted that more rental housing units in the neighborhood would prove positive for the Old North End and the rest of the city.

In response, Jonathan Leavitt, a community organizer who nearly won a city council seat as a Progressive three years ago, suggested that the envisioned projects would be of little benefit to low-income Old North Enders. He said the city’s 23-year-old “inclusionary-zoning” initiative, which requires that at least 15 percent of units in new residential buildings be priced well below market rates, has failed to make enough housing affordable.

Hoekstra, development manager for the Redstone Commercial Group, sought to establish his cred by noting he has lived in the Old North End for 12 years. He’s no outside exploiter bent on personally profiting at the expense of low-income locals, Hoekstra implied in his presentation at the McClure Multigenerational Center on North Winooski Avenue, right alongside the QTee’s site he wants to redevelop.

“There’s not enough housing in this neighborhood,” Hoekstra declared in response to Leavitt’s remarks. And one reason, the developer added, is that city regulations make it hard for builders to make even a modest profit in Burlington. “I’m not going to make money on the inclusionary-zoning units,” Hoekstra said in regard to two or three of the 28 apartments he wants to construct where QTee’s now stands. “I’m not going to make money on the retail space,” Hoekstra added, referring to a 1500-square-foot storefront proposed as part of the project. “And I’m making just enough on the rest of the project to justify doing it.”

Farrington, who is seeking to build up to 26 rental units on a vacant site on Pine Street, between Main and College, reinforced Hoekstra’s points. “It’s hard to do a project with all the requirements the city throws at you,” Farrington, a lifelong Vermonter, told the assembly. “These kinds of projects do just a little bit better than breaking even.”

Stu McGowan, a colorful civic activist and redeveloper well known to many in the audience, echoed Hoekstra’s comments. “It takes a long time and it costs a lot of money to get anything done in Burlington,” said McGowan, who has rehabbed more than 50 homes in the Old North End and is currently building a seven-unit rental project on the corner of North Street and Elmwood Avenue. That site has been vacant since 1978, when fire destroyed a building at the five-way intersection McGowan described as “the main entryway to the Old North End.”

For the past 20 years, McGowan has been something of a one-man Old North End improvement project manager, reviving homes and repainting them in psychedelic color schemes that brighten the built environment and lift local spirits. The motivation came from his seven-year tenure as head of the PTO at the former H.O. Wheeler School on Archibald Street. McGowan said he visited the homes of many students and was “dismayed” by the “really rough” conditions he saw.

A couple of years ago, “I realized what was needed next was to do in-fill,” McGowan told the audience, using a term for the development of vacant or underused spaces in urban areas. As “a test case,” he recently built a small apartment house on North Champlain and North streets to replace a multi-unit residence that had been destroyed by fire. “It almost broke me,” McGowan said. “It cost a lot more than I thought it would.”

In an interview following the neighborhood meeting, Hoekstra placed the potential cost of the permitting process for Burlington housing projects in the “hundreds of thousands of dollars.” He said that prospective redevelopers of the Bushey Auto Sales site decided to sell the property to his company, Redstone, because they could not cover the accumulating costs. Permits have been obtained for that planned 22-unit rental and ground-floor retail development, and construction is scheduled to start on December 1.

But what about Mayor Miro Weinberger’s often-stated commitment to encouraging in-fill residential development in Burlington? Has nothing changed in the 18 months of Democratic rule?

“There’s been some change,” Hoekstra said, pointing to “a little bit better coordination between city departments” involved in the development-review process as a specific example. “We’ve also gotten a lot of encouragement from the mayor, and we’ve seen some really hopeful signs of progress.”

Hoekstra specifically cited the Plan BTV blueprint that puts emphasis on facilitating in-fill projects and modestly increasing residential density. Weinberger has also persuaded the city council to scrap a requirement that any downtown development must set aside half of its square footage for commercial purposes. That regulation has long discouraged residential construction in Burlington’s core and would have prevented Farrington from moving ahead with his downtown apartment house on Pine Street, which is in Ward 3.

Any prospective developer in the Old North End faces the possibility of having to spend large amounts of money to remediate soil contamination, Hoekstra said in his presentation at the Neighborhood Planning Assembly. “Every site in this area has environmental concerns,” he said. “The soil is contaminated with lead and arsenic from the old Moran Plant” that burned coal on the downtown waterfront for 31 years prior to its closing in 1986, Hoekstra noted. In addition, tons of Moran coal ash were used to fill in a ravine where QTee’s now stands, he added. That will necessitate developing a remediation plan in consultation with federal environmental officials, Hoekstra said.

Obstacles to development in Burlington haven’t stopped the Bove family from filing an application to demolish a set of dilapidated multi-unit buildings on George Street near Pearl Street and replace them with 23 condominium “lofts.” And, in a type of initiative more familiar to Old North End residents, the nonprofit Champlain Housing Trust is planning to build up to 42 subsidized units on a two-acre parcel it is assembling on Bright Street. Brenda Torpy, who directs the nonprofit builder of “perpetually affordable” homes, says in a YouTube video that this run-down corner of the Old North End is sometimes jokingly designated “Blight Street.”

What accounts for the sudden push by private developers to build housing in the Old North End?

“There’s a lot of demand by young professionals for smaller apartments near downtown,” Hoekstra explained in regard to his QTee’s and Bushey Autos redevelopment plans. Farrington cited the same market opportunities, saying, “A big percentage of people want to live downtown, but there’s no housing stock for them.”

The rush to rent units at Mayor Miro Weinberger’s Packard Lofts project on North Avenue and Lakeview Terrace, within walking distance of Church Street, confirms that this market niche is sizzling hot. “All 25 units are fully rented and have been since the building opened” three months ago, says project manager Justin Dextradeur.

McGowan concurred that there’s pent-up demand for retail as well as residential space in the Old North End. In response to a question at the meeting as to whether the proposed new retail spaces will find tenants, the green-haired developer said he’s “been blown away by the amount of interest” expressed by prospective occupants of the ground-floor retail that will be part of the building he’s constructing on North Street and Elmwood Avenue.

“Something like Barrio Bakery was unheard of in the Old North End just a few years ago,” McGowan added in reference to a North Winooski Avenue neighborhood coffee shop and café. Numerous new restaurants have opened in recent years throughout the Old North End.

A more measurable motivator: Hoekstra observed in the post-meeting interview that “historically low interest rates” have opened a window for developers that will snap shut if the current 5 percent bank charge on commercial loans rises by just 1 percentage point. “Now’s the time to build,” he said.

But to describe what’s happening as “gentrification,” Hoekstra said, is too simplistic and negative a term.

“The Old North End has a much higher poverty rate than anywhere else in Chittenden County,” he noted. “That’s not a healthy situation.”

Decades of Progressive-led antipoverty initiatives “have worked to some extent and are certainly important,” Hoekstra added, “but new housing that isn’t going to displace anyone definitely can help with those efforts.”