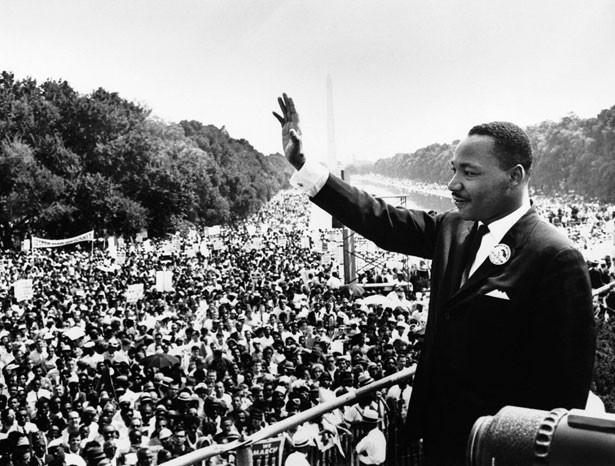 BARRE - A national monument to Martin Luther King Jr. built in Barre? That's what would happen if a group of artists and activists - including a Vermont native granite carver - got their way.

Two representatives of the Atlanta-based King Is Ours organization are arriving in Vermont's Granite Capital this Thursday to present their case at a press conference in front of, fittingly, the Italian stonecutter monument in Dente Park. Later in the day, they'll attend a reception at the Barre Granite Museum. Their message? That a statue dedicated to America's greatest civil-rights leader - and bound for the forthcoming MLK Memorial on the National Mall - should not be "Made in China."

Early this year, a memorial foundation committee granted 53-year-old Changsha sculptor Lei Yixin that commission. As reported in national media, the unceremonious announcement outraged many across the country, who found the choice inexplicable.

Gilbert Young, an African-American artist from Atlanta, was so upset that he launched King Is Ours with his wife. The group aims to raise awareness and, he hopes, "repatriate" the MLK memorial. Its website - www.kingisours.com - includes a petition addressed to National Memorial Project Foundation President Harry Johnson Sr., with a goal of collecting 1 million signatures. As of this Tuesday, only 1277 individuals had signed on to KIO's impassioned prose.

"The planned monument to our beloved Dr. Martin Luther King Jr. has been awarded to an artist from a country with a reprehensible history of civil rights violations against its people," the petition begins. It concludes: "We demand the right to interpret and present our own historic proclamation in this first ever national monument to an African American man."

One of the first to jump on board the repatriation effort was a white man: former Vermonter Clint Button. Now living in Spartanburg, South Carolina, where he runs Carolina Sculpture Studio, the 40-year-old Button was born in Chelsea, and he has had "family cutting in Barre for 116 years," he says in a phone interview. Once a chef whose professional artistic debut was carving ice, Button is now one of a dozen master granite sculptors in the country.

"No one in the U.S. was even allowed to bid [on the MLK sculpture]," Button laments. "I saw a blurb on it in February, another article in July, and thought, I gotta do something about it."

Button contacted fellow artist Gilbert Young and got involved with the advocacy group "to bring this back," he says of the sculpture commission. "This is not a black issue, or an anti-Chinese issue - we object to the process," he clarifies. "We object to a Chinese artist who can't imagine what it's like to be a black man fighting for justice in the U.S. doing it. Four men in D.C. chose China," Button continues. "We would have the same problem whether it was India, Africa, wherever. This is American history."

Since last spring, KIO's grassroots efforts - including a MySpace page - have generated their own share of international publicity, with interviews on CNN and the BBC. Support has come from celebrities such as hip-hop impresario Russell Simmons and Washington politicos. Earlier this month in California, the NAACP issued a resolution denouncing the "outsourcing" of the MLK statue and demanding not only that it be repatriated, but that African-American artists be named the "Artists-of-Record" and American granite be used.

To that last point, the USA Granite Industry, the Barre Granite Association and Vermont's congressional delegation say a hearty "amen."

In a letter dated September 26, Sens. Patrick Leahy and Bernie Sanders and Rep. Peter Welch strongly urge Roderick Gillum, chairman of the MLK memorial foundation, to consider Barre granite, which "has been used in some of the most significant monuments and memorials around the country, including the Vietnam Veterans Memorial in Washington," it states. A copy of the letter, which does not refer to KIO specifically, was provided by Sanders' office. In what seems like a veiled reference to China's reputation for less-than-humane working conditions, the letter continues, "Furthermore, Barre manufacturers provide their employees with excellent wages and ensure the highest safety standards at their facilities."

Native son Clint Button also champions Vermont granite - and suggests that Barre's stone-arts school would be a great place to create a King sculpture. He further proposes the facility be used to train a new generation of granite carvers (one of the goals of the currently moribund venue). Gilbert Young, he reports, has 30 years' experience in developing educational arts programs. "There are no black artists in the carving industry," Button notes. "I've got people who are literally chomping at the bit [to learn]."

Regardless of the outcome of KIO's Vermont visit this week, Button is looking forward to the homecoming, and is hopeful about advancing his own stone-school dream. Having lived in the north and the south, he's familiar with the stone industry in both places - the other Granite Capital of the World is Elberton, Georgia. Plus, "I understand the racial issue more than most people in Vermont," he asserts. "God has put me in a unique position." Button has already used those connections to solicit, and get, support from the Barre Granite Association, which will host the KIO delegation on Thursday.

Meanwhile, the memorial foundation is soldiering on, still some $18 million shy of its $100 million fundraising goal. (The feds contributed just under 10 mil.) The memorial website touts a long list of high-profile celebrities who are helping to "build the dream." It boasts of the African-American, woman-owned architecture firm that will design and build the memorial. It offers donors a $5 "memorial wrist band." Not least, there's a virtual tour of the memorial model. You have to look very hard to find any mention of a Chinese sculptor selected to create the 28-foot-tall, full-length likeness of King. Nonetheless, that decision may be already carved in stone - Chinese pink granite.

Gilbert Young and Clint Button from King Is Ours will be in Barre on Thursday, November 8, for a press conference at 9 a.m. in Dente Park, followed by a tour of key granite industry sites, culminating in a reception from 4-6 p.m. at the Granite Museum. For more info, see www.kingisours.com, or call the Barre Granite Association at 476-4131. For more info on the Martin Luther King Jr. Memorial, visit www.mlkmemorial.org.