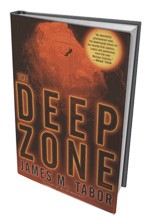 There are still a few places left on Earth where, if you come to grief, you’re on your own. Those lethal sites include certain peaks and “supercaves” delving miles beneath the earth, and Waitsfield author James M. Tabor writes about them with knowledge and brio. In two nonfiction best sellers, Forever on the Mountain (2008) and Blind Descent (2010), this former History Channel producer has chronicled expeditions so perilous that the corpses of those who died en route often remain as warnings for explorers to come.

In The Deep Zone: A Novel, published this month, Tabor has switched gears without changing the subject. He returns here to the underground world of Blind Descent, and readers of that book will recognize features of Cheve and Huautla, real mammoth caves in Mexico.

But it would be impossible to confuse Tabor’s sober nonfiction with The Deep Zone, which is fiction in hyperdrive. It’s a fast-paced techno-thriller bristling with guns, two-fisted heroes and heroines, scantily clad women, colorful bad guys, and acronyms. While the science behind the story is thoroughly researched — and fascinating — this is very much a beach book.

In Blind Descent, cavers endured unbelievable hardships for the thrill of discovery. In The Deep Zone, they do it to save the world. Hallie Leland, a brilliant young microbiologist, caver and all-around formidable outdoorswoman, has been summoned to Washington, D.C., to join a team seeking a last-ditch weapon against a rogue strain of Acinetobacter bacteria.

First contracted by soldiers in Afghanistan, the flesh-eating infection is poised to rampage through the U.S. military, and the president has proclaimed it “potentially the worst threat since Pearl Harbor.” The most likely cure is an organism known as “moonmilk” that thrives in the depths of a Mexican supercave, on a site contested by drug lords, natives and federales. Because of her previous experience there, Hallie is recruited for a mission to descend 5000 vertical feet and recover a new sample — in just a week.

As if those stakes weren’t high enough, Tabor tips us off to the presence of moles inside the Biomedical Advanced Research and Development Authority (BARDA) who once framed Hallie for espionage and retain a vested interest in her mission’s failure. This being a thriller, the conspiracy ascends to the highest levels of government.

Tabor’s omniscient narrative is almost frenetically busy. Chapters focused on the cave expedition alternate with ones devoted to a heroic army doctor; to scientists striving to break the bacterium’s genetic code; and to a slew of villains, ranging from dead-eyed psychos with special-ops training to a Cabinet member who blithely relieves himself on the Lincoln Memorial.

The tale is paced like a summer action movie — and is sometimes just as hard to take seriously. The characters conform so fully to type that readers will quickly ferret out the identities of the BARDA moles. The dialogue often sounds like something Roland (2012) Emmerich could have penned. And, by continually taking the action outside his star setting — the cave — Tabor dilutes its unsettling force.

That is unfortunate, because the underground scenes are not just exhaustively detailed but tense and freaky. Tabor has made his Cueva de Luz a virtual theme park of nightmares, from a 500-foot drop to a flooded tunnel to an acid lake. Luckily, one of the expedition members, a shadowy government agent named Wil Bowman, has brought a pack of high-tech gadgets that would make Q slaver with envy.

Bowman is also 6-foot-4 with “unblinking eyes the blue of glacial ice,” and he’s super-dreamy — in Hallie’s view. In an apparent bid for the female audience, Tabor has not merely created strong central women characters but turned his supercave into an unlikely setting for romance. There’s a basis for this: In Blind Descent, Tabor noted that some couples have indeed gotten busy underground. But those cavers didn’t have a week to save humanity, and it’s hard not to giggle at passages in The Deep Zone like this one:

[H]e peered straight into her eyes and held his gaze there and, crazy though it seemed, one mile deep in a supercave, on a mission that could save hundreds of people from horrible deaths — or not, if they failed — Hallie decided he was going to kiss her.

It’s as if, an hour into Contagion, Laurence Fishburne stopped barking quarantine orders to give Kate Winslet the look of love.

Tabor’s prose rarely gets this silly, though he does indulge in a few too many sentences like “I’ve got GPS waypoints to the cave in a HUD on my NVDs.” But then, The Deep Zone is a thriller in the mode of Michael Crichton, who was never celebrated for his turns of phrase, and all the author really needs to do is keep readers hooked while satisfying their appetites for science-y stuff.

That Tabor does, for the most part. But he might have done well to bypass some of the firefights and Bondian villainy in favor of more time in the cave. A passage to the bowels of the Earth that “breathes” like a living organism, plays tricks on the human mind and hides creatures with the potential to save us from super-bacteria — all that is not just thrilling but real. The novel’s well-worn thriller tropes pale by comparison.

"The Deep Zone" by James M. Tabor. Ballantine Books, 432 pages. $26. Tabor will speak and sign books on Friday, May 4, 7 p.m., at Northshire Bookstore in Manchester.

From The Deep Zone

“He says that the cave is another world,” Arguello relayed. “One that — how to explain this — contains what we call heaven and hell. Many enter the cave and never return. Those who do return are different.”

Hallie felt goose bumps rise on her arms. The old man was speaking the truth. On her other trip into the cave, she had experienced exactly what the curandero described. One of the hydrogeologists, a hard-core smoker, had a cold when they entered Cueva de Luz. It intensified with frightening speed, becoming pneumonia in both lungs before they reached the cave’s terminus. If he had not disappeared, it was entirely possible that he would not have made it out of the cave in any case. Another of the men had flirted with her — just lightly, nothing offensive — during their trip down to Mexico. The deeper they went, the more powerful his lust became, the more insistent his advances, until toward the end she slept with her sheath knife in one hand inside her mummy bag. That man, too, had disappeared.