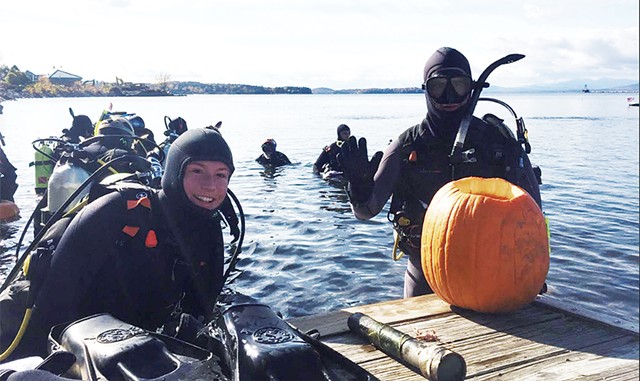 Some folks really went all in this Halloween. Twenty-two divers gathered over the weekend at Perkins Pier in Burlington to jump into Lake Champlain and carve a pumpkin — underwater. Donning wetsuits and oxygen tanks, the competitors headed into the depths with hollowed-out gourds and came up with their spookiest creations.

The only rule? Stay submerged the whole time.

"The hardest part, I found, was being able to keep myself in a stable position to cut straight lines," said Clougher, an employee at the Waterfront Diving Center, which hosts the annual event. "The trick is to put a weight in it so it stays down, because a hollow pumpkin will float."

Clougher didn't participate in this year's edition but instead stayed on land to judge the contest. Though 22 divers participated, there were only nine jack-o'-lantern entries; each carver had a "buddy" diver or two for safety, Clougher said.

The groups were allowed to dive to a maximum depth of 12 feet in the 52-degree water and use any carving equipment they wanted.

University of Vermont students Connor Stack and Laurel Taylor took home the top prize with a carving of a fish. Each won two free charter dive trips out to a shipwreck of their choice in Lake Champlain.

The event, which has been held annually for at least 15 years, raised more than $1,000 for cystic fibrosis research. Both daughters of Waterfront Diving co-owner Jonathan Eddy have the lung disease, according to Clougher.

The Halloween competition is just one of several off-season Waterfront Diving events. After a New Year's Day dive, the one in February requires a chain saw to cut a hole in the ice. Not recommended for pumpkin carving.

The original print version of this article was headlined "Deep Cuts"