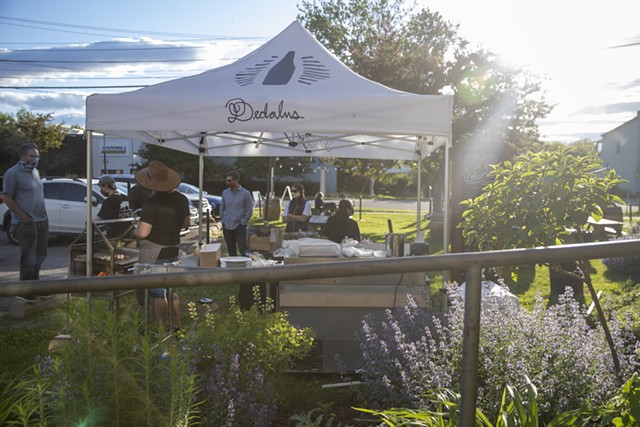 Jason Zuliani, owner of Dedalus Wine Shop, Market and Wine Bar, which has locations in Burlington, Middlebury and Stowe, is planning to open what he believes will be Burlington's first vinyl bar in late winter or early spring 2022.

"Vinyl" refers to old-school records that will be spun by a roster of top local DJs on a state-of-the-art sound system. The yet-to-be-named bar will occupy part of the space behind Dedalus' Pine Street shop and wine bar that was occupied by Green State Gardener before it moved a half-mile south.

"We're taking inspiration from what is sort of a tradition in Japan of small listening rooms with neat cocktail lists," Zuliani said, referring to intimate record bars for musicophiles that have become institutions in cities such as Tokyo.

The new project also indulges one of Zuliani's personal passions. "I've been a vinyl collector for a long time," he said.

As patrons listen, they will be able to sip drinks from a new cocktail list that Zuliani described as "classically styled with a focus on amaro-based cocktails." In keeping with his core business model, he also promised "a killer wine list."

Micah Tavelli, executive chef of Dedalus in Burlington, will develop the food menu, which will lean toward charcuterie and cheese boards with warm olives and good bread, Zuliani said. "This will not be a place for dinner," he clarified.

He aims to make the vinyl bar "a beautiful, modern environment with an extraordinary listening system," he said. Its record collection will include only music that was mastered from its original analog source. Zuliani is working with a team of sound designers and engineers to create a custom-built system that will include "a classic analog DJ booth" and "a no-compromise turntable."

Some evenings will be devoted to specific artists or albums, Zuliani said. A cover charge may sometimes be required for entry.