Decision Time: Does Phil Scott Have the Drive for a Gubernatorial Run? 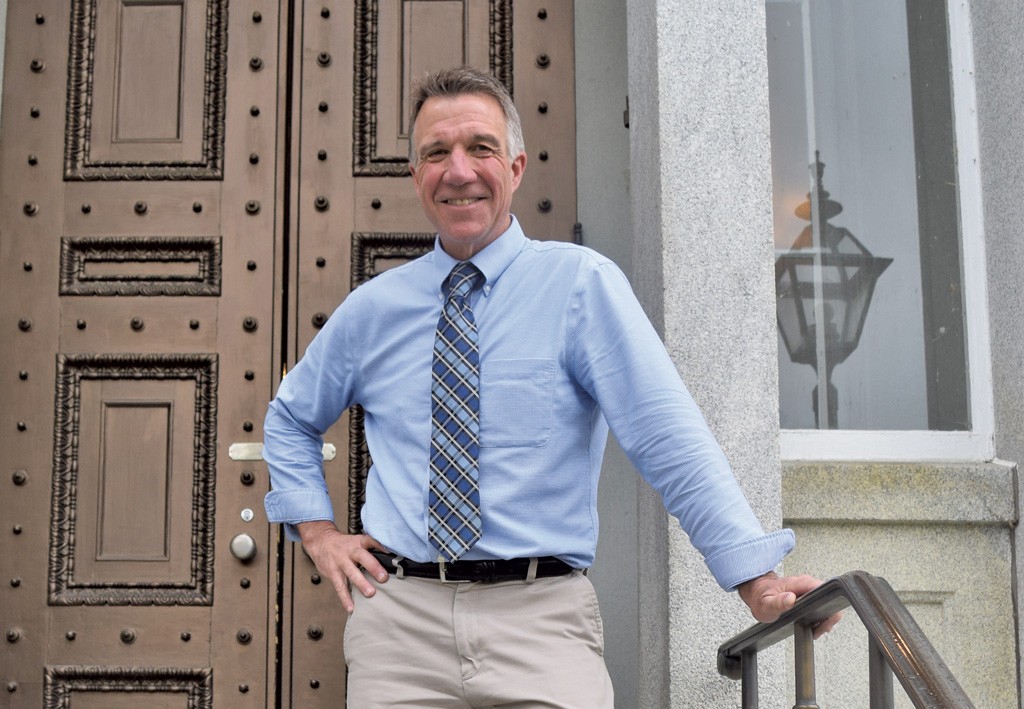 Since November 2014, Vermont Lt. Gov. Phil Scott has hardly been able to get through a day without some friend, colleague or stranger urging him to run for governor. On Monday afternoon, those entreaties intensified.

Shortly after Democratic Gov. Peter Shumlin made the surprising announcement that he will not seek reelection next year, the 56-year-old Republican's phone was buzzing with texts, calls and emails. Senate Minority Leader Joe Benning (R-Caledonia) said he sent Scott an email that played on his car-racing hobby. It read: "Gentlemen, start your engines."

"Every conversation I have somehow comes back to that subject," said Scott, who is serving his fifth year as lieutenant governor. His wife, Diana, has been hearing it, too, he said.

It's a powerful elixir to be courted by everyone from strangers on the street to former governor Jim Douglas. But does Scott, who's won three statewide elections and served 10 years in the state Senate, really want to be governor? That's the question.

"For some, they think, You have a chance, you have an opportunity; why wouldn't you? Doesn't everyone want to be governor? I don't know if that's true," Scott said. "I'm not sure they're fully aware of how this would change my life."

Specifically: Does the Barre native want to set aside the excavating business he's run for 30 years, the cars he's raced for 23 years at Thunder Road and the privacy he's enjoyed to run for the state's top job?

His deliberations didn't get any easier on Monday, when Shumlin pulled out of the running. The governor's decision vastly expanded the pool of potential candidates and ramped up pressure on Scott to make a choice.

He's in a unique position: The Republican Party's only statewide elected officer has aisle-crossing appeal, and, after 15 years in politics, even Scott seems to be aware it's time for him to step up or step out.

Vermont's No. 2 said that if he doesn't run for governor, he might not run for office at all, giving up his relatively safe seat as lieutenant governor. "That's on the table," Scott said.

To reach his decision, Scott's not just ruminating with friends and family about whether he'd have to quit driving a racecar; he is looking into what he'd have to do to separate himself from DuBois Construction, the company he co-owns with his cousin. The company sometimes bids on state contracts, over which the governor has some potential influence; the lieutenant governor does not.

"I've been in business for 30 years. I've worked very hard to get it to where it is. That's a huge decision," he said.

Scott is also researching how much a gubernatorial campaign might cost. He's been told it would take at least $1 million. "A million dollars is a lot of money," said Scott. "I don't have any misconceptions about how difficult it is to raise $1 million. Do I think it's possible? Yes."

Which way is he leaning? It depends on the day, Scott said, Monday included. "Some days I think, I really ought to do this. The wind's at your back," he said. "Then on another day it seems overwhelming, and I think, Why would I want to do that?"

Since Shumlin's announcement, plenty of pols have been weighing the same decision. On the Republican side alone, at least four former gubernatorial candidates said they were considering a run: Brian Dubie, Randy Brock, Scott Milne and Dan Feliciano. (For more on potential candidates, see Fair Game on page 12.)

None of the other GOPers has as much going for him as Scott. He's got more political wins and name recognition than any other contender.

"I think he's the best candidate for our party and, frankly, the best person for the job," said Douglas, who served eight years as governor before retiring in 2011. He did acknowledge that Congressman Peter Welch (D-Vt.), another potential candidate, could prove to be a formidable opponent.

Other prominent Vermont Republicans are also counting on Scott. "He's the guy Vermonters are looking for," said Rep. Heidi Scheuermann (R-Stowe), who briefly considered a run for governor last year. Now she'd like to see Republicans rally around Scott. "I'm hopeful he decides he wants to do it," she said.

Benning, of the "start your engines" email, said: "I'm really convinced he needs to run, and I really believe he is going to run."

Despite the pressure, friends and colleagues said Scott won't be forced into anything. "I don't think he feels like he has to run," said Dick Wobby of Northfield, a friend since junior high school who has helped run Scott's political campaigns. "If Phil runs for governor, it's because at that time it's best for the state of Vermont."

Scott said he expects to make a decision a year before the November 2016 election, which some consider late. "Hopefully, it will be sooner than that," Scheuermann said.

Douglas agreed. With a more crowded field likely, Scott may need to send "a serious signal" of his intentions before that, he said.

Scott said he needs time. "I'll know when it's right," he said. "I don't want to have regrets."

One indication of Scott's intentions: He's been increasingly down on Shumlin, even though he delivers his criticisms almost apologetically. "He's losing the faith and trust of a lot of Vermonters," Scott said of Shumlin, prior to the governor's announcement that he won't run for reelection. "Vermont is entitled to a different approach."

Critics say Scott has never shown an ability to firmly articulate the opposition point of view. He's a tough competitor at the racetrack, where he's a leading winner in the Late Model category. But some wonder whether he could bring the same drive to Montpelier.

"If you're in politics, I think there's an assumption among the public that you're dying to be governor. I don't think that applies to Phil Scott," said Rep. Chris Pearson (P-Burlington), who said Progressives would like to have a candidate for governor next year — though it won't be him.

Scott's never been known for championing causes such as Shumlin did by passing a same-sex marriage law, shutting down the Vermont Yankee nuclear power plant and trying to tackle universal health care.

Scott's website touts his annual Wheels for Warmth event, which collects used tires and raises money for low-income heating assistance. He also points to his Vermont Everyday Jobs tour, in which he works alongside ordinary Vermonters.

Although Scott couldn't identify a particular bill that defined him during his 10 years in the Senate, he said he is proud of his work crafting the state's transportation and capital bills. "We cleaned up the capital bill to take out the pork spending. I didn't feel like you should need to know somebody on the committee to get money," he said. "It wasn't an easy sell."

Scott's mild-mannered style is likely to keep him at odds with more conservative members of the Vermont Republican Party. That faction declined to support Milne in the 2014 election, instead backing Feliciano and splintering the Republican vote.

Darcie Johnston, a political operative who ran Feliciano's campaign, said Scott has not been any more aggressive than Milne in pointing out Shumlin's health care failures. Last week, when Shumlin declared that a problem with Vermont Health Connect had been fixed, Scott should have immediately gone to the media to question the claim, Johnston contended.

"Where was he?" Johnston asked. "We need a strong candidate."

Scott's style is more contemplative, but that's what the state needs, Benning said. During the past legislative session, Scott quietly went to Rhode Island with Sens. Jane Kitchel (D-Caledonia) and Tim Ashe (D/P-Chittenden) to talk about other state insurance exchanges that were working. Oh, and he drove.

"That, to me, is a sign of somebody willing to work across party lines," Benning said. "It never has been his style to seek glory."

That was true even back in high school, where Scott was a quiet leader who focused on solving problems, Wobby said. He rarely drew much attention but usually was helping others, he said.

Fixing things is what Scott does, Wobby said. "Phil Scott could always figure out how to get things done when the rest of us drifted off," he added. "Everything Phil's been involved with turned out to be at some point beneficial to all of us, and it usually turns out to be fun or an adventure."

Will the next adventure be running for governor? That's what Scott has to figure out.