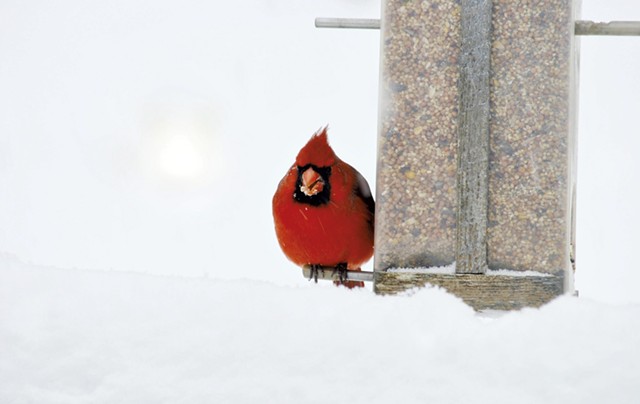 I saw the first cardinal this morning in the snow


outside my window at the feeder and was tempted


to call him my heart for his color, shape


and hunger, but no, not yet; rather, little red bandit


at home in the north where the sky conspires


straight through, where somehow the voles dig deep


enough to survive the frost and the fox grows thin


but lives on bones till March, where the deer eat cones


and bears digest themselves in the dark, where all


things live, in fact, with the fear that they might die


tonight from the terrible cold and lack, although


they have no word for it, only the songs they sing


we call the music of life. I watched the cardinal


devour seeds by the dozens and then fly off, no less


diminished, to grow hungry again in a matter of minutes.


To remain on the feeder for a couple of seconds


as a ghost of the bird that shames the winter.

The original print version of this article was headlined "December 10th"