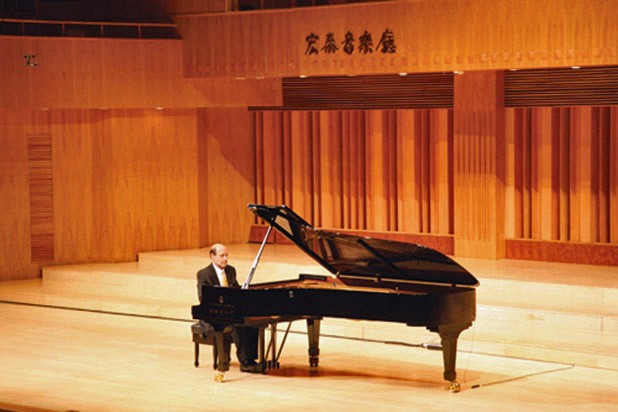 One of the lesser-known gems of Burlington’s classical music scene is the University of Vermont English department’s Music and Literature Concert Series. For the past four years, English professor Tom Simone and music-faculty pianist Paul Orgel have organized one concert per semester that explores a literary era through its classical compositions — Shostakovich and Messiaen to illuminate Second World War writing, say; or Prokofiev and Martinu to bring the sounds of 1920s Paris to life. Thanks to a private fund used by the English department, the concerts engage excellent musicians and are free to the public, which generally makes up half the audience.

At the next concert, students taking Simone’s “Dawn of Modernism” class will join lovers of Claude Debussy to hear an all-Debussy program. Orgel is calling the concert “Composer of the Modern: Debussy at 150” in honor of the 150th anniversary of the composer’s birth. One might expect Simone’s students to be studying the Symbolist poets, given Debussy’s tendency to find inspiration in his fellow Frenchmen’s poems for such works as Prélude à l’après-midi d’un faune (Mallarmé) and Cinq poèmes de Baudelaire. But in fact they’re currently tackling Marcel Proust’s Remembrance of Things Past.

Perhaps no writer was more attuned to his or her classical moment than Proust, that explorer of involuntary memory through madeleines and music. In his textual experiments, Simone says, Proust “saw himself as a literary Debussy.” The writer also revered Debussy’s music, hiring musicians to play the composer’s quartet for him in his cork-lined music room and listening to performances of Debussy’s opera Pelléas et Mélisande 12 times by théâtrophone — a kind of telephone connected to the theater.

The attraction was that Debussy was doing something entirely new in music — as his compatriot was attempting with literature. “Debussy is the first composer we consider to have a sensibility that we call modern,” Orgel explains. The composer’s innovative harmonic progressions, freedom with form and unpredictable rhythms broke all the rules. They also earned him the label of “Impressionist,” though Debussy himself rejected such classifications.

The concert on Thursday, November 1, will explore how the composer turned music in a new direction. As Orgel tells it, it took a while for Debussy to break ranks with a century and a half of Germany-centered tradition and throw Wagner — then the most popular composer by far — out the window. The concert won’t include Debussy’s early, more familiar works, such as “Clair de lune,” the melodic third movement of Suite Bergamasque that’s endlessly popular with piano students. Instead, the program showcases his post-1900 chamber works for various combinations of piano, harp, flute, cello, violin and viola, including three rarely performed sonatas Debussy wrote during the First World War, just before he died.

This is the period, says Orgel, when Debussy’s “whole manner of composing is not about themes and melodies but motives — fragmentary ones — and color. It’s about the balance of sounds and colors.”

Orgel will open the concert with an 1888 Eric Satie piece to offer an origin story for Debussy’s use of parallel and nonfunctional harmony. The first group of Debussy pieces follows a theme of ancient Greece, including a piano prelude called “Danseuses de Delphes” and a flute solo named for the myth of Syrinx. The latter will be played by Karen Kevra, founder of Capital City Concerts in Montpelier. The sonatas — which “go in a new direction [from classical Greece]” and are “very free in the form they take,” Orgel says — feature Rebecca Kauffman on harp, Vermont Symphony Orchestra first cellist John Dunlop, and the acclaimed violinist and violist Arturo Delmoni.

These compositions may not seem as radical today as they did when they premiered. So it’s worth keeping in mind — as Simone’s students will — the other groundbreaking leaps into the modern Debussy witnessed. Those include, notes the English professor, “the emergence of the telephone, radio, film, psychology and atomic physics.” Like Freud, Einstein and Proust, Debussy was looking for “ways to grapple with, express and embrace the newness of the world around him.” Posterity speaks for his success.