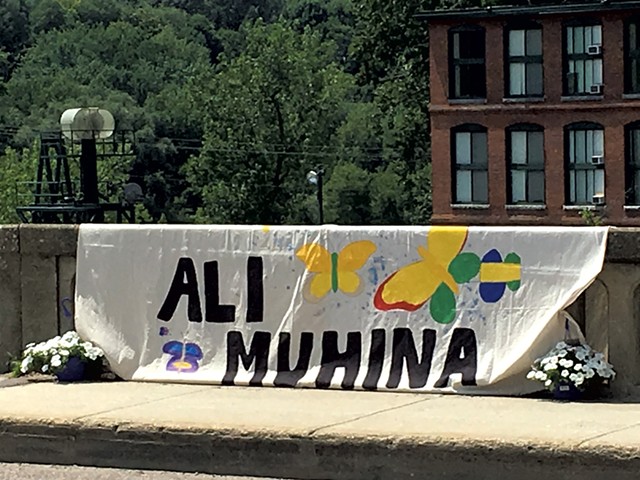 The last thing Hillary Gombar told Ali Muhina before the 11-year-old boy left her house in Winooski on July 11 was, "Find out from your mom if your sisters can go swimming."

Gombar, a mother of two, had met Ali at the Winooski Memorial Library in January. The Somali boy, who lived a few streets away, struck up a close friendship with her family and visited them every day.

Ali didn't know how to swim, and Gombar promised to teach him at the Maple Street Park & Pool in Essex Junction. She wanted his sisters to join them, but she wasn't sure if they had bathing suits. She did not hear back from him that day.

The following morning, Gombar and her husband learned that the boy had fallen into the Winooski River while playing with his friends, just hours after leaving their home. He was still missing.

They rushed to Ali's house and found his mother, Sofia Mohamed, wailing in grief. Ali's father was already headed for the riverbank, to keep watch with relatives and family friends as divers prepared to resume the search for the boy's body. Strong currents and a swollen river had hampered their efforts the previous night. Later that day, the Colchester Technical Rescue Team found the child's body about 500 yards downstream from the place he was last seen. 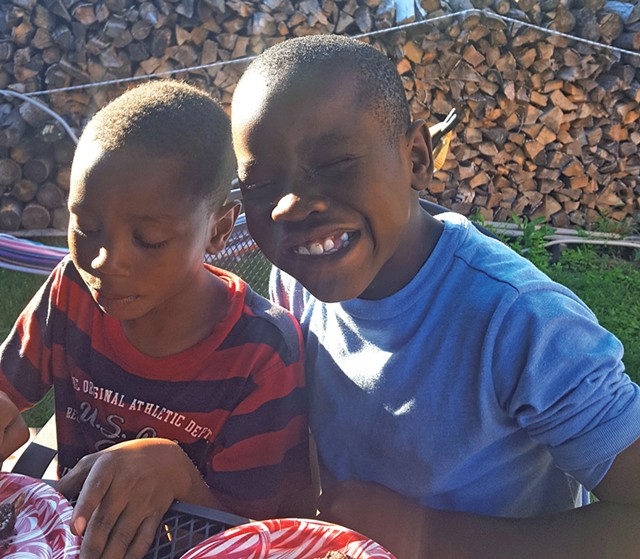 That evening, across the river in Burlington, at least 150 people gathered at Oakledge Park to attend a memorial vigil for Christian Kibabu. The 17-year-old rising senior at Burlington High School, whose family is from the Democratic Republic of Congo, had drowned in Lake Champlain the day before Ali fell into the river.

Although Christian could swim, his friend Bienfait Badibanga told Seven Days the teen had once said, "I get tired so quickly."

At the vigil, fellow players from the school's state championship soccer team spoke about how hardworking and dedicated Christian was as a student and athlete. "He was a very amazing man who motivated everyone at every game," said Arun Karki. "He supported us even if he didn't play."

The two drowning deaths in as many days stunned many people in the greater Burlington region. Because the two victims were from the New American community, public officials and service providers are discussing outreach to immigrant families about swimming and water safety.

Last Friday, Burlington Mayor Miro Weinberger's communications and projects coordinator, Katie Vane, and his chief of staff, Brian Lowe, convened a gathering of stakeholders to explore whether there's a need for more water and swimming safety resources in the community.

"We do not know all of the circumstances that led to the tragic deaths of Christian Kibabu and Ali Muhina," Vane wrote in an email last Thursday. "Regardless of these details, we are concerned that some of our immigrant and refugee children may have grown up in circumstances where water and swimming safety resources and opportunities were very limited."

Vane described the meeting as productive and said two groups have been tasked with following up on issues raised by participants. That effort will include more outreach in the community, she said. 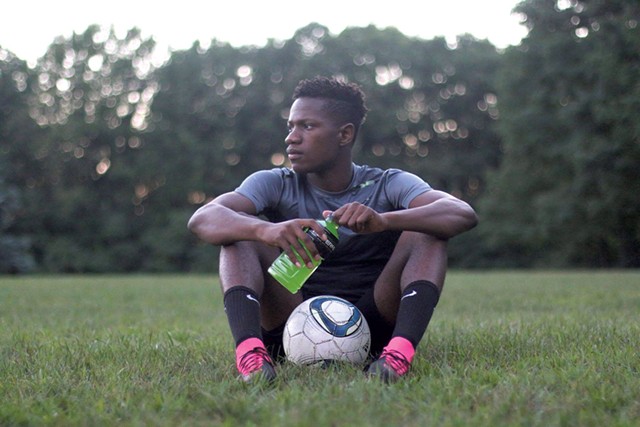 While swimming instruction isn't mandatory, Winooski and Burlington school districts offer water safety and swimming programs. But Aden Haji, who participated in Vane and Lowe's meeting, said he never signed up for swim class. He resettled with his family in Vermont in 2003 and attended schools in Burlington.

Now a 22-year-old University of Vermont student, the Somali man said that if swim classes were offered when he was a student, "It wasn't advertised well." Haji remembers attending fire safety but not water safety lessons, he added. In the immediate aftermath of the recent deaths, Haji said, his parents reminded him and his siblings to avoid the water.

Another member of the Somali community, Fama Abukar, said she and her siblings and peers had learned how to swim during summer and after-school programs. "Schools also used to take us on trips to the beach and let us splash around the water to get used to the idea of swimming," said the 22-year-old woman, who is a friend of Ali's family.

For seven years, the Greater Burlington YMCA has run Camp Splash — a three-day program that's meant to serve low-income and New American families. There's no cost, and participants learn water safety and basic swimming techniques in a pool. On average, 75 people enroll in the program each year, most between the ages of 5 and 10. The YMCA also has a long-standing relationship with Lynda Siegel of the Integrated Arts Academy at H.O. Wheeler. She offers water safety lessons to her class, which is comprised of English-language learners in the third to fifth grades.

Greater Burlington YMCA president and CEO Kyle Dodson stressed that although these two drowning deaths involved New Americans, they could just as well have happened to others in the community. Many people can't swim, he pointed out: "It's really a water safety issue."

But he also noted that individuals who are newly arrived or "don't move in circles where people are on swim teams" may not know that there are pools they could use and swim programs they could join. More needs to be done to increase the public's awareness of the available resources, he continued.

But knowledge is just one aspect of the equation. There are several reasons why individuals may not be able to access swim instruction, explained Jess Lukas, Dodson's youth and family coordinator.

The Winooski-owned Myers Memorial Pool is the only public pool in the Onion City, home to many immigrants. Winooski used to contract with the YMCA to run Camp Splash in its pool, but the facility closed last summer because of its deteriorated condition. Instead, Camp Splash and practice for the Winooski swim team have been moved to the YMCA pool in Burlington. Although transportation is provided for Camp Splash participants, it can be more difficult for Winooski children to get to the pool outside of programming hours.

A committee headed by Winooski community services director Ray Coffey will present preliminary cost estimates for a new pool to the city council on August 7. Coffey said a "loose" price tag for a new facility is $4.4 million. He said the city has many big-ticket projects and needs to be mindful of their impact on taxpayers. But he acknowledged that residents have been frustrated with the pace of the pool project.

Even when pools are available, Lukas said, cultural challenges must be overcome. Some African families have told her that they didn't swim "because there were crocodiles in the water," she said.

Some Muslim girls have not learned how to swim because they have not had culturally appropriate bathing suits, Lukas continued. Last year, the YMCA bought burkinis, full-body swimming suits and head coverings, with the help of Dr. Andrea Green, a pediatrician at the University of Vermont Children's Hospital. "That has been huge to get some of the young women into the pool," Lukas said.

Lessons and rules taught at the pool are useful elsewhere, Lukas said, including knowing where and when it's safe to swim.

Public officials have been advising all Vermonters to be careful in the water in recent weeks. "Heavy rain this summer has caused our waterways to rise and currents to increase, so it's even more important for all to be alert and careful as they enjoy our lakes, ponds and rivers this summer," Public Safety Commissioner Tom Anderson said in a statement last Friday.

On Sunday, Vermont State Police reported yet another drowning: David Clement, a 64-year-old Pittsfield, Mass., man, fell into Lake Champlain as he was returning a boat to a marina.

Dodson hopes that Ali and Christian's deaths will cause people to think about swimming as something other than simply a recreational pursuit. "Swimming and water safety are essential life skills," he said in a statement last Friday.

Such a shift in thinking is long overdue, according to Michael Hill Jr., coordinator of the Multicultural Youth Program at the Burlington-based Spectrum Youth & Family Services. More needs to be done to promote swim education among communities of color, he added.

Growing up in a poor, black household, Hill said, he opted for extracurricular activities that taught him skills and made him more employable. Individuals of color, he continued, tend to perceive swimming and other water sports as hobbies that "white people do." Jobs and programs around water-based sports should be created for people of color, Hill said. Seeing older youths and adults as lifeguards and swim coaches would give children a new attitude about swimming, he continued. Accommodation for Muslim girls, such as providing all-female swimming classes, will go a long way toward making swimming instruction culturally acceptable, Hill added.

The drowning deaths have galvanized many in the community. Friends of the victims have set up fundraisers to help the two families cover funeral expenses. Others want to set up a scholarship in memory of the youths.

The Burlington High School soccer team will retire Christian's jersey, No. 6. His friend Bienfait, a musician, plans to write a tribute song. Burlington Parks, Recreation & Waterfront has postponed the kickoff event for the O.N.E Community Center out of respect for Christian's family and peers. He was close to the youths the center serves.

Mellisa Cain, the center's program director, met Christian five years ago at the New North End Youth Center. She described the Congolese teen, who moved to the U.S. with his family when he was 5, as "an old soul" and "a great artist" who wanted to play soccer in college.

"He was very determined to be a success in terms of going to school and making his family proud," she said.

Sean McMannon, the superintendent of Winooski School District, recalled Ali as an ideal student. "In the classroom, Ali was a true model of [the] 'Winooski has HEART' motto," McMannon wrote in an email. "Ali was Honest, Engaged, Appropriate, Responsible and Timely in his academic endeavors." McMannon described Ali as a serious reader who had "such vitality for everything he did."

Learn more about the fundraisers at gofundme.com/alimuhina and gofundme.com/chriskibabumemorial. The Vermont Amateur Soccer League will host the Christian Kibabu Memorial Charity Tournament on July 29 at Tree Farm Recreational Facility in Essex Junction.