Opinion: Death Be Not Proud 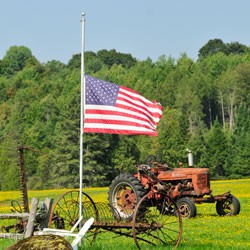 Mourners for National Guardsman Tristan Southworth started showing up an hour early at Hazen Union High School in Hardwick. By 9 a.m. on September 1, it was already 80 degrees. Red Cross volunteers hauled a cooler of bottled water up and down the murmuring, lengthening queue.

At 10, a third of Hardwick and Walden was filing into the gym: relatives and friends of the family, neighbors, storekeepers, doctors, former teachers and coaches, and townspeople like me, who didn’t know Tristan but still felt he was ours. His former classmates were there, too, the girls pretty in summer dresses, the boys awkward in suit jackets or wrinkled dress shirts over jeans — kids still spotty with acne, still thinking over adulthood.

Unlike Tristan, who was killed in a firefight in Paktika Province, Afghanistan, on August 22. He was two months shy of his 22nd birthday.

Tristan wasn’t a kid who joined the military because he had no other options. By all accounts he was a brilliant but self-effacing athlete, a good student, a teasing but generous friend and big brother. His parents could afford to send him to college; he attended for one year, in Colorado. Still, he signed up for the Guard as soon as he could, as a high school junior in 2006.

Everybody said Tristan Southworth died as he lived — selflessly, trying to rescue a fellow soldier — as if this lent sense, or logic, to his death.

As I took my place, standing at the back of the packed gym, I wondered how many others had come, as I had, unable to find meaning in the loss of this promising boy — or any boy — fighting to uphold a corrupt government in an unending war of choice half a world away.

The flag bearers appeared sure of the meaning. Grizzled and ponytailed, their black biker vests emblazoned with POW/MIA insignia, these guys were probably Vietnam vets; they had lost their own buddies in the defense of a corrupt government in a war of choice half a world away. And, who knows, maybe in the middle of the night they, too, have groped to understand why. But, standing at attention as the dress-uniformed soldiers and officers from three states marched past, their faces were proud and resolute.

Patriotism makes no moral distinctions among wars or deaths. Under the flag, all sacrifices are honorable.

Guard Chaplain Lt. Col. Calvin Kemp, the Vietnam veteran and resident of nearby Stannard who led the short, Christian service, seemed also to know the meaning. I tried to glean it as he read snatches of Scripture evoking the Lord’s protection, nations in disarray, grief and a kind of pious ambition.

The majestic 121st Psalm opened the ceremony: “I lift mine eyes unto the hills. From whence cometh my help?” — only rendered in an American vernacular version “I look up to the mountains. Where can I find help?”

Kemp read from Isaiah: “On this mountain He will remove the veil of grief covering all people and the mask covering all nations. He will swallow up death forever.” And Psalm 46: “Nations are in turmoil, and kingdoms topple … The Lord of Armies is with us. The God of Jacob is our stronghold.”

All this culminated in his sermon, which Kemp called “Victory.” It was not about the kind of victory Tristan strove for in life — victory on the playing field or even on the battlefield. This was the victory wrested from death through the martyrdom and resurrection of Jesus Christ. “Don’t let your eyes trick you. Don’t let your aching heart deceive you,” Kemp said. “This is not a time of despair or hopeless defeat. This is a time for victory. This is not about death at all. It’s about everlasting life.”

The assembled bowed their heads for the Lord’s Prayer; they said amen.

I remained silent, part of me envious of a faith that could declare despair irrelevant and push aside politics to find fellowship. But another part of me was angry. In imagining Tristan’s soul someplace blissfully beyond place, how were we dealing with his shot-up body lying on a dusty Afghan mountainside near the Pakistani border?

Adjutant General Michael Dubie and Gov. Jim Douglas stepped up to this task. Dubie awarded Tristan several military honors, including a Bronze Star and a Purple Heart; Douglas presented Tristan’s parents with the Vermont Patriots Medal. Valor, honor, freedom: These were the words from which we were to glean reasons for Tristan’s sacrifice.

Outside in the white sunshine, the honor guard stepped smartly carrying Tristan’s coffin to the hearse. The other servicemen and -women saluted. A slender, dark-haired woman in jeans and a sleeveless shirt stood in the doorway and wiped her eyes — Tristan’s girlfriend. His grandparents held hands. His younger brother looked lost in his black suit.

The family was loaded into a school bus. The hearse pulled out, with the bus behind it, followed by a military convoy of black Chevy Suburbans and, slowly gathering from the parking lot and surrounding streets, scores of cars and pickup trucks.

On the way to the Main Street Cemetery, Tristan’s body passed the Memorial Building, its inside walls inscribed with the names of Hardwickians who had fought in the Revolutionary War, the War of 1812, the Spanish-American War, the “War of Rebellion” and “the World War.” It passed the American Legion’s massive new granite memorial, depicting the weaponry of five wars on the front and listing the locals who served in World Wars I and II, the Korean War, the Vietnam War and “The Gulf Wars and Other Actions” on the back.

It passed the big flags hanging from the telephone poles and the little flags stuck in the street signs and the flower boxes on the Main Street Bridge. It passed the red, white and blue garlands and the banner over the porch of the old Hardwick Inn, reading, “Our Hero, We Will Never Forget You. Rest in Peace.”

I didn’t follow on to the cemetery. The burial felt too intimate to include me, a stranger. Instead, I made a U-turn and drove back to our house. The New York Times was on the kitchen table, headlined by President Obama’s “withdrawal” of combat troops from Iraq, the closure of Operation Iraqi Freedom and the launch of a new phase, Operation New Dawn. On the radio, a BBC reporter said not much was changing on the ground. He called the events a “rebranding” of the war and said he’d already picked up an Operation New Dawn coffee cup.

Another lead story detailed revelations of corruption in the Afghan Bank, run by a close associate of President Hamid Karzai, who has declined to investigate his friend’s “unorthodox financial dealings,” including “lending tens of millions of dollars to himself.” On the same page of the paper, a small item reported the deaths of five American troops in Afghanistan on Tuesday, the day of Tristan’s wake.

A week after the funeral, the banner has been rolled up and the flags taken down from the telephone poles. Beside the Legion’s monument, Old Glory is back at full staff.

“Tristan Southworth” has not yet been inscribed under the Gulf Wars section of the Legion’s memorial, where there’s room for only a few more names. More monuments will be needed, anyway. Since this one was constructed eight years ago, the U.S. has engaged in two more wars.