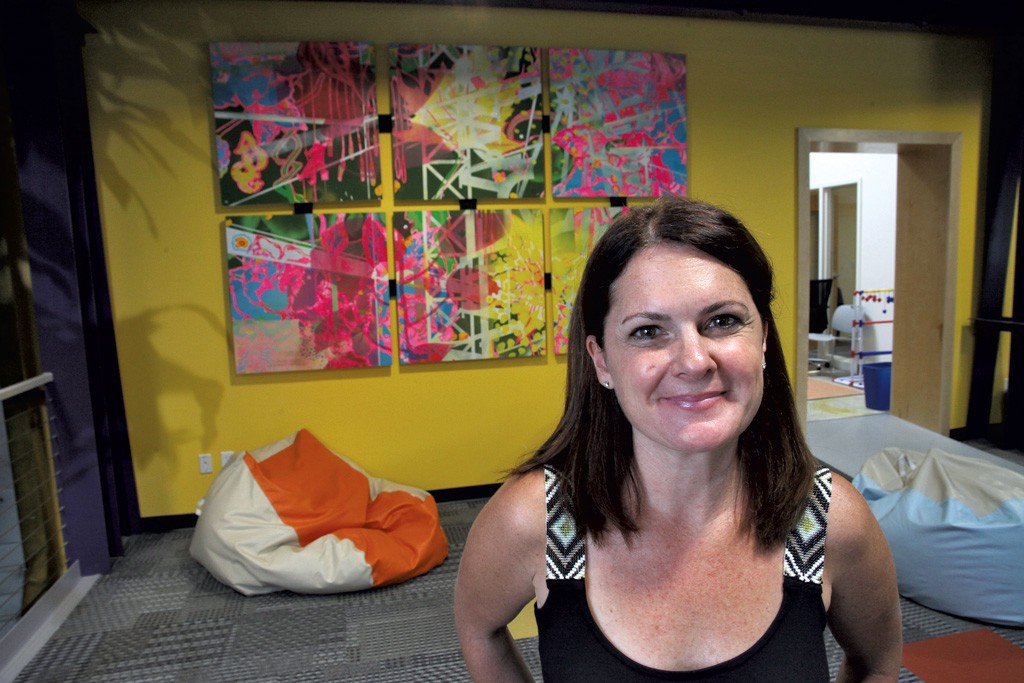 Mary Lacy's clothing, hair and hands are polka-dotted with paint — a minor matter for a muralist. Lately, though, that speckling has been more tenacious than usual. Lacy has been pulling long days to complete her latest project before Burlington's South End Art Hop begins on September 11. She landed a plum commission: the decoration of the twin silos in front of the Pine Street headquarters of Dealer.com.

For this, her largest commission to date, Lacy has given her signature "stained glass" style a twist. In most of her works, such as the mural of a huge hummingbird on an exterior brick wall in downtown Burlington, the artist has used multicolored, tessellated shapes as puzzle pieces that form plants or animals. To liven up the dull, obtrusive silos, however, Lacy is going nonrepresentational, using those shapes simply as shapes.

The idea of Lacy's altering her recognizable aesthetic came from Jill Badolato, 42, Dealer's director of social responsibility. Says Lacy, "Jill really pushed me for this one. I didn't expect to be challenged like that, but she did, and I'm grateful for that."

Badolato, who has a background in marketing and photography, has worked for Dealer for 10 years and held her current title for more than two. Through her efforts, Dealer has emerged as one of the most reliable supporters of local artists. One of Vermont's largest corporate employers, Dealer is known nationally for marketing software packages that have become standard in the automotive sales industry. Locally, Dealer is known as an unusually generous promoter and patron of artistic creativity. 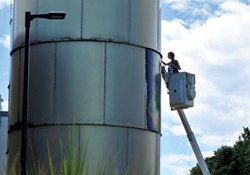 The company's public lobby doubles as an art gallery that features a rotating collection of work by Vermont artists. While the works in Dealer's permanent collection are not for sale, those in the lobby and elsewhere in the building are. Artists set their own prices. In two years, says Badolato, Dealer has facilitated the sale of $125,000 in artwork. Company policy is to take no commission on any sales and to purchase at least one piece from every featured artist.

When Seven Days visits Dealer's bustling HQ, Badolato arrives fresh from a meeting with kids at the King Street Center, her normally speedy delivery further amped up by too many cups of lemonade. As she leads Seven Days on a tour of the facility — which includes two gyms, a mini golf course and a restaurant for which the company chef butchers hogs in-house — it becomes clear that Badolato is sincere about finding creative ways to pay local artists fairly for their works.

Badolato typically collaborates with artists to develop the themes and ideas their works will represent, but she stops short of giving specific stylistic guidance. "You don't want to change what the artists will do, but you can help inform them about what will work for this particular space," she says. 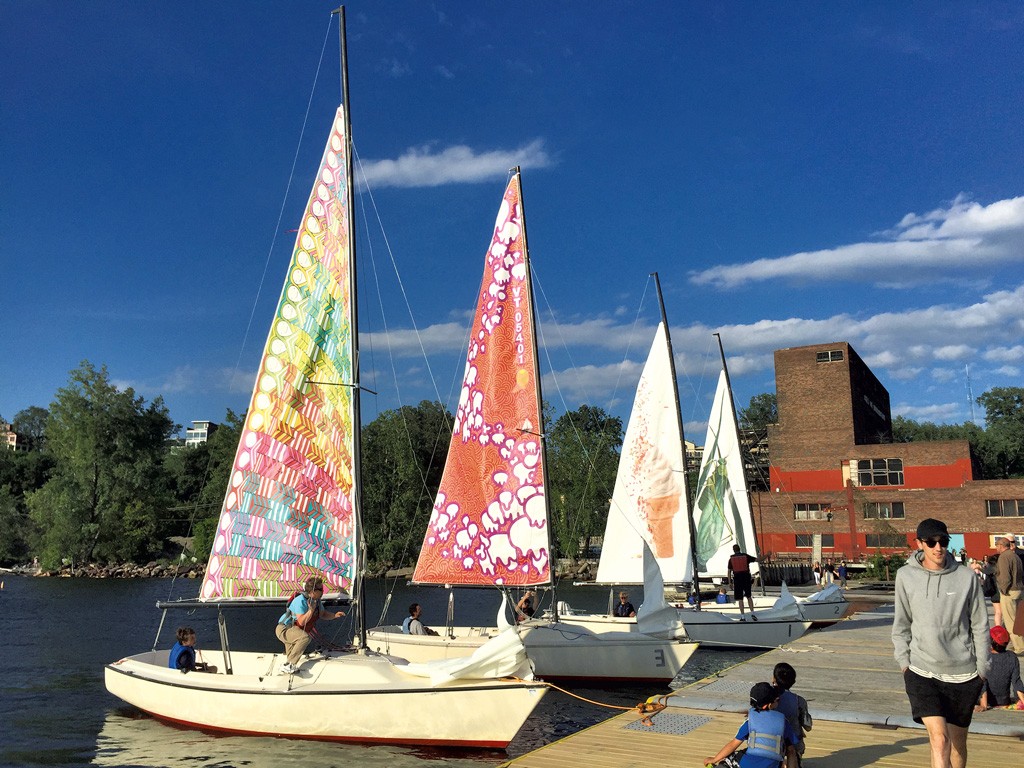 It's not news that a large company supports the arts. Corporate patronage has been a vital source of artists' income for millennia. Notable historical examples include the Venetian and Florentine merchants who bolstered those cities' art scenes as long ago as the 13th century, and the wealthy landowners in feudal Japan who sponsored the creation of tableaux and epic verse. Today, multinational corporate behemoths maintain world-class art collections; the outdoor sculpture garden at PepsiCo's Purchase, N.Y., headquarters is a good example. But, as Manock argues, it can be hard these days for lesser-known artists to connect with patrons who pay fair prices.

"Most of the projects that are calls to artists in Burlington ask for artwork and then donate the proceeds to something else," says Manock by phone from her home in Brooklyn, to which she recently decamped. "People just want artwork for cheaper than what the artist would normally charge for selling the piece."

Manock opines that Badolato is "doing an amazing job trying to make Dealer relevant to the community, and has been totally successful in hiring artists for big projects that are real. Dealer provides real résumé-building opportunities for artists," Manock continues. "Not many other companies put money towards the arts in that way."

Dealer has purchased several of Manock's works. In addition to hiring her to paint the Fork in the Road food truck, the company has purchased an arboreal four-panel banner from the artist, and more of her works hang throughout the building. "[Badolato] hangs my work in places where people see it," says Manock. "That means a lot."

One of Nicholas Heilig's paintings hangs in a well-trafficked area of Dealer's main floor, its stark black and white contrasting sharply with the company's vividly colored walls. Heilig says that if he had to give the untitled painting a name, he'd call it "Kryoman," in honor of the costumed, fire-spewing musical robot dude who inspired the work at a 2013 "live painting" event. Heilig, who has since relocated to Colorado but spends several months each year in Vermont, also praised Dealer's commitment to local art.

"[Dealer] treated me and compensated me very fairly for my time with the Kryoman piece," he says in a phone interview. "[Company executives] seemed very down-to-earth, very friendly, and they really appreciated what I was doing. It's nice to see that type of leadership. They're making a good amount of money, and they're putting it right back into the area."

Badolato says the painting of the silos is an important project for her and her employer. With its two large campuses and major name recognition, Dealer.com has a strong presence in Burlington's South End. But few who are not employees or business partners have reason to enter the Pine Street building to see the many artworks on display. Lacy's colorful silos will soon become the unmissable face of Dealer's commitment to public art. That's a far cry from their original function as a storage space for plastic beads to be processed into filaments: The building used to be a bristle factory.

Badolato not only encouraged the direction of Lacy's mural but provided its name: "Inside Out." The idea, Badolato says, was to "take the color, space, energy and interior of this building and this culture, and bring it to the outside. People are always curious about what goes on in here, and it's a big building in the middle of a pretty small town. I really feel that [the finished work will be] representative of the big, bold energy of Dealer.com."

Badolato explains that her company has wanted to paint the unsightly silos for years. An initial request for proposals, on which the company collaborated with the South End Arts and Business Association (SEABA), went out about four years ago. But that plan was never realized, in part because Dealer.com was purchased by a public company called Dealertrack. Now, that company, in turn, is in the process of being purchased by the private company Cox Automotive, a likely sale that occasioned Badolato's resurrection of the silos project.* This time, the company has not partnered with SEABA, but the formal unveiling of Lacy's work is scheduled to take place at the SEABA-sponsored Art Hop.

Lacy's burgeoning career has been silo-centric lately. She was one of four finalists in the competition to paint two massive disused silos in Jeffersonville. This talented 24-year-old muralist from Jericho suddenly finds her work in high demand.

Though she's modest about her recent success, Lacy knows that having her name on the Dealer silos could give her nascent career a major boost. Which is why she's been getting up at dawn and putting in 12-hour days inside a small "bucket" at the end of a mechanized crane. The silos are 32 feet tall and, as Lacy puts it, "a long way around." Now that her work will be in front of one of the most noticeable buildings on a busy street in the artsy South End, those long-useless silos may well define her career for years to come.

Correction 8/19/15: An earlier version of this story stated that Dealertrack had been purchased by Cox Automotive. In fact, that sale is still in process.