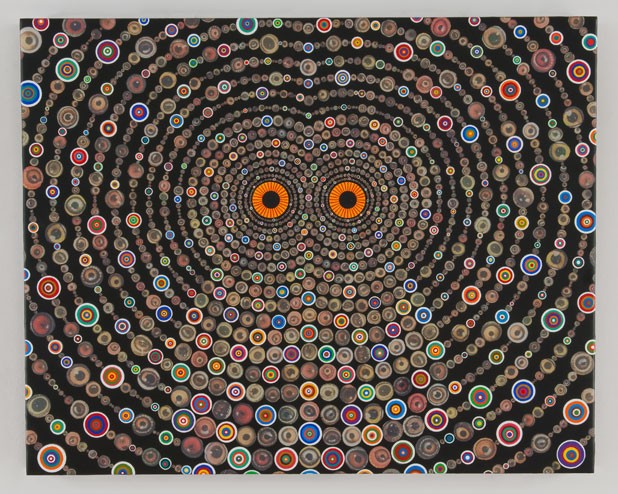 If you were unable to travel this summer, and simply daydreamed about distant landscapes, the exhibition “Outdoor Excursions” at the BCA Center offers a destination predicated on the possibility of those dreams. New York-based art critic and independent curator Gregory Volk has brought the work of 13 internationally recognized artists to Burlington for a show comprising videos, drawings, photographs, paintings and sculpture. Installed on three floors of the venue, the works collectively suggest the inherent potential of place, and art, to transport and transform. “Outdoor Excursions” offers a parallel between a traveler wandering through an unfamiliar landscape and an artist navigating an idea. Both may experience disorientation, even while embracing the prospect of uncertainty and surprise.

Brazilian choreographers and filmmakers Rosane Chamecki and Andrea Lerner teamed with cinematographer Phil Harder to create “Flying Lesson.” The four-minute film opens with two women, outfitted with large, white-feathered wings, enthusiastically practicing a calisthenics routine in preparation for their self-sustained flight. Counting in unison, “uno, dos, tres,” they bend, twist and skip around the room flapping their wings with determination. Unbelievably, they do fly, up into the air and finally outside, to the accompaniment of a tune that evokes the wonder and enchantment of a music box. The filmmakers’ use of humble stop-motion animation, rather than dazzling digitization, in creating the flying sequences is a charming parallel to achieving flight with a pair of homemade wings.

In “2 Schirme (2 Umbrellas),” one of five videos by Roman Signer installed on the fourth floor, a man, perhaps the artist, is seen with packing tape lashing together two large, opened, black umbrellas in the middle of a heavy windstorm. Once the umbrellas are joined, he releases them. Buffeted by the wind, they tumble along the grass, rise to momentarily spin in the air and then drop to continue their involuntary journey.

In this and the other videos on view, Signer displaces objects, liberating them from their predetermined utility and environments. An ordinary office chair sits in the middle of a stream, its seat slowly swiveling; a white, button-down shirt goes for a zipline ride; and a kitchen table takes a trip downriver, complete with camera, ready to record the adventure. Watching these videos one after the other, we begin to recognize these seemingly futile and absurd acts as hopeful, poetic gestures, whether or not the impossible is realized.

A few pieces by Teresita Fernández, Ati Maier and Laura Bruce are like postcards from distant places — visual encapsulations of our desire for something out of reach. The postcard image is a fabrication that exists anterior to an experience. As a surrogate for the real thing, it offers the promise and proof of an adventure.

“Horizon (Halo)” by Fernández transforms the four walls of the back gallery space with hundreds of small graphite chunks, creating a horizon line that functions as both a shadow and reflection of the graphite. Maier’s video “Event Horizon” is a live-action version of her acid-colored paintings. Coming together and flying apart strand by strand, multiple layers of lines and colors accrue as a single mass in Maier’s constructed universe. Both these artists suggest the horizon is a limit to be surpassed.

In “The Diary of William Ashley,” Bruce has excerpted actual diary entries of 19th-century fur trader William Ashley, from his trip along the Oregon Trail in March and April of 1825. The text is neatly handprinted on a lined chalkboard that fills nearly a whole wall on the BCA Center’s second floor. Set against the backdrop of history, Ashley’s account records his expectations and disappointments, reinforcing the distance between the lure of a destination and the actual experience of being there.

Sebastiaan Bremer’s three large, hand-painted chromogenic prints appear to be family snapshots taken on a hiking holiday in the mountains of Europe. The images are viewed through an effervescent haze, a world within a world. Each picture is embellished with candy-colored bubbles applied in paint and ink by the artist. Bremer’s work provides a template for reordering a moment, or memory, realized after the fact.

Fred Tomaselli’s small but potent painting of an owl staring out at the viewer was created specifically for this exhibition. The bird’s steady gaze is reinforced by a multitude of eyes in various shapes and sizes scattered across the painting. The artist’s labor-intensive method of cutting images from various sources and collaging them into his paintings merits close inspection. Tomaselli has vividly conjured the sensation of becoming lost in the dark woods, unable to see what is ahead, and fearful we are being watched.

Ragna Róbertsdóttir’s installation, “Lava Landscape,” is a wall-sized work constructed with lava from the volcano Hekla, in the artist’s homeland of Iceland. Gluing the black bits to the white wall in an organic pattern, Róbertsdóttir has fixed a moment in time, translating and reconstructing a volcanic eruption using the very material of its residue. The fragile piece is gradually disintegrating, as evidenced by the accumulation of lava grains on the floor.

This is a thoughtful, entertaining and welcome exhibition, well worth the journey downtown.