The story would sound far-fetched if a Hollywood screenwriter devised it: In 1978, a construction crew excavating in the Yukon town of Dawson City uncovered 533 reels of film from the silent-cinema era. The hoard of newsreels and dramatic features had accumulated in the basement of the town library, under the supervision of the Canadian Bank of Commerce, until 1929, when bank employee Clifford Thomson dumped it in a defunct swimming pool beneath the town's hockey rink. Thomson disposed of the highly flammable silver-nitrate films for safety reasons, not knowing that a thick layer of permafrost would cover the buried canisters and serve as a primitive form of film preservation.

The bizarre tale of the discovery of hundreds of lost films is the subject of Dawson City: Frozen Time, which will be screened on Friday, October 20, at Dartmouth College's Hopkins Center for the Arts in Hanover, N.H. A film history buff's dream, the documentary also serves to chronicle an early chapter of the American dream, in which thousands of prospectors trekked north to the Canadian boomtown that served as the center of the Klondike Gold Rush.

After the Dawson City film collection was discovered, the Royal Canadian Air Force transported it to Library and Archives Canada in Ottawa. Though the painstakingly restored films have been available for public viewing for decades, in that city and at the Library of Congress, Dawson City director Bill Morrison suspected that few were aware of the significance of the find.

"As I got more and more into the collection, [I realized] that I really had a synopsis of Western civilization in the 20th century, somehow," Morrison says in a phone interview. "From the removal of the indigenous population and the discovery of gold, and then the corporatization of gold and how the town really rose and fell." 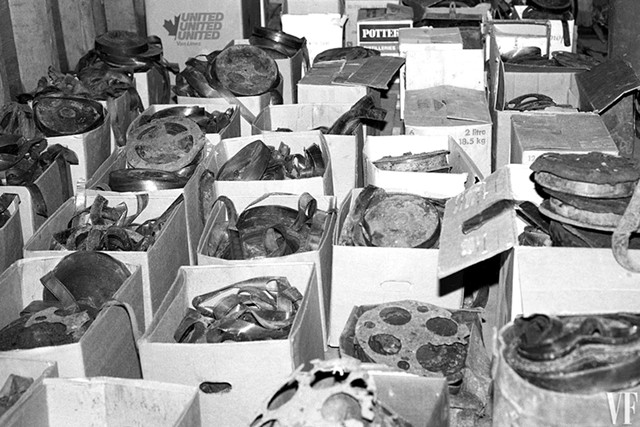 As Morrison's documentary details, the remote Yukon outpost attracted a cornucopia of figures who would later become famous. "Tex" Rickard, the most successful boxing promoter of the early 20th century, got his start in the fight game in Dawson City. William Desmond Taylor, the prolific silent-film director whose unsolved 1922 murder scandalized Hollywood, was a timekeeper for the Yukon Gold Company. Frederick Trump, the grandfather of the 45th U.S. president, opened a restaurant and hotel in Whitehorse, on the route to Dawson. Believed by historians also to contain a brothel, the establishment served as an early source of the Trump family fortune.

Morrison is no stranger to found-footage docs. His experimental 2002 film Decasia combined silent-film clips in various stages of deterioration into an abstract meditation on the slow death of celluloid. Though his latest work also re-edits found footage, it's a more traditional documentary, mixing clips from the Dawson City film collection with interviews and archival photographs.

Perhaps the most notable nugget from the reclaimed cinematic treasure is newsreel footage from the 1919 World Series, which Chicago White Sox players conspired with gamblers to throw. As Morrison observes, it's remarkable in itself that footage from the infamous "Black Sox" scandal was part of the surviving film reels. Even more improbable is that one of the moments depicted — a botched double play in the fourth inning of Game 1 — was later used as evidence in the trial that led to eight players being banned from professional baseball for life.

"All of the coincidences that would have to happen for that to be captured and for us to see it today, it's really breathtaking," Morrison says.

Morrison will appear at a Q&A session after the Friday screening at Dartmouth. On Thursday, he'll address a pair of classes taught by Mark Williams, an associate film professor who also serves as director of the university's Media Ecology Project, an initiative that provides online access to moving-image research materials.

Williams sees Morrison's visit as an ideal opportunity to spotlight a neglected period of film history. "Most people aren't familiar with this era, certainly, and they haven't necessarily given much thought to these kinds of found-footage compilations as opportunities for art," he says. "And Bill is just the master of that."

Dartmouth has a long history of film presentation and preservation. The Dartmouth Film Society got its start in 1949 with a free showing of the 1932 W.C. Fields comedy Million Dollar Legs. A notable alum is Robert Gitt, who helped curate the university's film collection as an undergrad and went on to become senior film preservation officer at the UCLA Film & Television Archive. Bill Pence, longtime director of film at the Hopkins Center, cofounded the Telluride Film Festival in 1974.

Sydney Stowe, who took over as acting director of film when Pence retired last year, notes that the Hop didn't fully convert to digital projection until 2013. She mourns that many young moviegoers have never experienced watching 35mm film flicker on the big screen.

"I was carrying 60 pounds of film up until four years ago and opening up the cans and pulling out the films and threading the projectors," Stowe recalls, "so I have that connection to [film's] birth, but I'm not sure that modern audiences do."

She adds that the scarcity of recent movies shot on actual film stock underscores the historical importance of Morrison's documentary.

"I think what Dawson City does," says Stowe, "is, it reminds us that film was a really dynamic and often explosive medium that feels light-years away from what we're experiencing now through our computers and our televisions and our [digital] screenings."