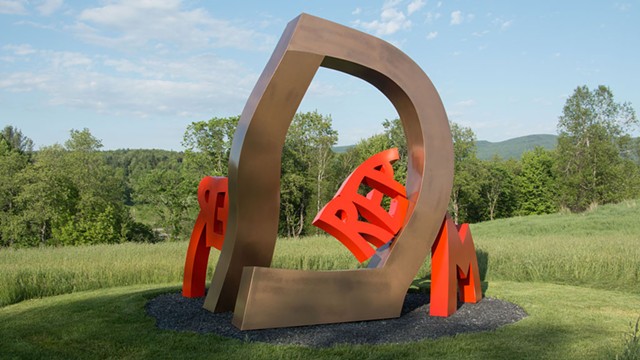 In mid-June, David Stromeyer stood under a large boulder that hung from the arm of a crane some 30 feet high. On the ground lay a pair of stacked steel plates, each 10 by 16 feet, atop a bed of gravel he had shoveled into place with painstaking precision. The world-renowned artist would be using the giant rock, which he had plucked from his Enosburg Falls property, to crush the metal into a very specific dent and curvature.

Stromeyer wore a ball cap, jeans and an Army-green shirt that read, "I do all my own stunts."

Indeed he does. For 50 years, he's been producing massive steel sculptures. More than 60 of them are scattered about 35 acres that Stromeyer and his wife, Sarah, established as Cold Hollow Sculpture Park in 2014. Due to the coronavirus pandemic, the park is closed to the public this summer. But that hasn't stopped the 73-year-old sculptor from making more art.

Preparing for the dramatic drop, Stromeyer climbed into the cab of the crane and adjusted it slightly to maneuver the boulder into position. An assistant pulled on a rope to keep the stone, about 3,000 pounds and shaped like an oversize potato, in the exact spot.

Stromeyer then got out of the crane, picked up a rifle and aimed it at the winch that held the straps around the boulder. The first shot hit but didn't release the hook. On the second shot, the rock plunged onto the plates on the ground with a thunderous thud, sending up a cloud of dust.

And so Stromeyer's latest sculpture was launched. It has yet to be titled.

For most of his works, Stromeyer uses a self-built, 150-ton hydraulic press to coax massive steel sheets, beams and pipes into curves and corners. The press allows him to better control the force and timing. For this piece, though, the plates were too large to fit in the press, Stromeyer explained. It wasn't the first time he has used a rock to shape metal, but the last one was almost 40 years ago, he said.

Before releasing the boulder, Stromeyer had displayed a scale wooden model of the eventual sculpture. Built at the Stromeyers' winter home and studio in Austin, Texas, the model shows the double steel plates as the center of multiple appendages. These extend from the top and below, like a table with legs pointing in both directions.

In explaining his inspiration for the new piece, Stromeyer noted that, on a trip to South America in 1978, he observed ancient Incan walls covered repeatedly over many years with stucco and paint. Last year, when Cold Hollow hosted a series of programs around the theme "diving beneath the surface," Stromeyer said he began to ask himself, "How can I bring that kind of narrative to steel?"

He hesitated to ascribe too much of his intentions or meaning to the latest creation; he prefers that viewers draw their own conclusions. Stromeyer will, however, happily discuss his process and methods at length, spouting off measurements and calculations and the characteristics of his materials.

The sculptor has produced more than 470 works that illustrate the suppleness of steel — that is, how an inflexible material can bend to an artist's will to execute his vision. Most of his elegant, contemporary pieces play with geometry. Many are painted in vibrant colors that change according to the angle of light and proximity of the viewer.

The Stromeyers intended for the boulder drop to kick off the 2020 season at Cold Hollow. A party was to follow, with local craft beer and music.

COVID-19 dashed those plans, along with all programming and fundraising. Just a handful of onlookers watched the rock fall: a couple of assistants, a reporter and a videographer who's a longtime friend.

"It's really powerful to see something so physically built," said Vera Gates, a landscape architect who lives in Franklin and serves on Cold Hollow's advisory council. "It's pretty cool. There's a lot of engineering and preparation."

Gates acknowledged the extensive deliberation that goes into Stromeyer's work. "Then it's serendipity," she said. "It's magic, and you get what you get."

Stromeyer has added at least one new sculpture each year at Cold Hollow, siting them in carefully selected spots among the rolling fields and meadows. When he moved to Vermont in 1970, the artist chose the former farm precisely for its contours, which complement the shapes of his towering sculptures.

"Early on I used to think about individual pieces," Stromeyer said. "Now, especially with the formation of the sculpture park, I think about the whole park as one artwork, with its components."

Rosemary Branson Gill, Cold Hollow's executive director, said that despite their disappointment over the loss of the 2020 season, the pandemic has given her and the Stromeyers a chance to meditate on the park's future and the role it could play in inspiring creative thought in Vermont.

This moment marks a shift for Stromeyer artistically, as well, Gill said: from introspection into his own art making to a broader, longer-term vision of what he will leave behind. In early June, he installed "Portrait of the Artist" — the only artwork at Cold Hollow that includes text. It spells out "Dreamer" in bold, bright-red blocks.

"This is a real pivot in his career, where he's making sculpture beyond the sculpture itself," Gill said. "He's always said, 'I set myself problems, and then I solve them.' So this is not solving the problem of one piece but of the whole park. I really feel like he's approaching the work differently."

The newest sculpture will be the subject of a book project that Stromeyer hopes to publish, to "document one piece from concept to completion." As he gets older, he said, he has grown more compelled to chronicle his creative trajectory.

After the rock drop, Sarah Stromeyer asked her husband if the concavity of the plates turned out the way he wanted.

"That end kicked up more than I planned," he said, studying one edge, "but I'll make it work."