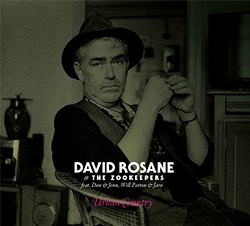 In explaining his band's latest album, Urban Country, songwriter David Rosane quotes Anton Chekhov: "Man will become better when you show him what he is." He then adds this line — presumably his own and not the famed Russian writer's: "Yeah. They can keep their happy music."

Rosane, who splits his time between Vermont and Paris, France, is the dean of the multinational rock band David Rosane & the Zookeepers. As evidenced by the group's previous record, Modern Folk, released earlier this year, the former Cornell University teacher and activist has a predilection for exposing societal foibles. Wrapped in the tattered cloth of folk-punk, the album was a fiery rebuke of commercialism, nationalism, exceptionalism and any number of other isms.

Urban Country is a thematic sequel to Modern Folk. Or, as Rosane describes it, "the postmodern deconstruction of human-nature dualism. Whatever." Whatever, indeed.

As on Modern Folk, Rosane primarily takes aim at the dichotomy that is our reliance on the Earth and our seemingly unending quest to destroy her. Prior to moving to France, Rosane worked with Cornell in the Amazon for a decade as an ecologist. It's his view that most of the world's sociopolitical ills can be traced to the harm we cause the ecosystem.

That worldview is most apparent on album closer "Earth." The song is based on the book Reinventing Eden, by the eco-feminist Carolyn Merchant. It's a darkly provocative song on which Rosane, sounding like a cross between Joe Henry and Mark Knopfler, snakes around the idea of femininity as a metaphor for the Earth. The theme is repeated in subtler — and less explicit — ways throughout the album, as on opener "Silver Cotton," which laments the commercialization of natural resources.

But Rosane is not myopic, and he touches on plenty of less global issues. "Ripe," which features Vermonter Will Patton on dobro, is a touching tale of saying goodbye to a parent. "Are We Mad?" is a rootsy take on a classic Bob Marley-ism: "Love the life you live. Live the life you love."

At its core, Urban Country is a musical expression of outrage and protest. But for all of Rosane's hyperintellectual agitation, he has also a keen sense of empathy. His worldly compassion doesn't so much soften his pointed sermons as it humanizes them. Ultimately, Rosane understands he's as frail and flawed as the rest of us.