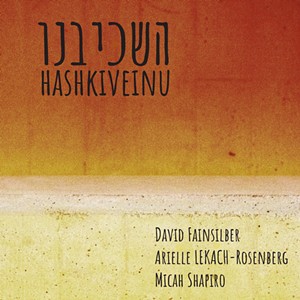 No joke. Rabbis David Fainsilber of the Jewish Community of Greater Stowe, Arielle Lekach-Rosenberg of Minneapolis and Micah Shapiro of Philadelphia have been collaborating since their days at rabbinical school. And it shows. Just before the pandemic, the trio's enduring partnership in music, friendship and shared Jewish heritage culminated in the tightly arranged album Hashkiveinu.

Recorded in the Stowe sanctuary to the accompaniment of JCOGS musicians, Hashkiveinu is a high-gloss supercut of nine compositions that are masterfully crafted and mixed with precision. Sung entirely in Hebrew, the album's liturgical substance blends beautifully with its minor-key melodrama and Phrygian scales.

The album's various genre allusions — layers of which are sometimes packed into a single song — might not add up to anything astoundingly original. But this work's sensibility is generous and far more festive than that of a conventional studio album.

The lead track, "Birthday Niggun," is a far cry from the classic happy birthday song. Fainsilber's baritone voice is portentous; its back-and-forth cadence of minor modes is fraught with aural tension before eventually giving way to a more celebratory sound.

Shapiro's vocals on "Yedid Nefesh," a piyut, or religious poem, known for expressing an intense fealty for God, are gently expressive, airy and melodic.

Title track "Hashkiveinu" is structured around the venerable words of the Jewish prayer after which it's named, "a prayer of protection that even names safety against plagues," Fainsilber says in a press release. Here, Rosenberg's voice takes the lead; her melodies, which are no less hypnotic for being familiar, will surely charm listeners.

"Lecha Dodi" ("Come my beloved") is another liturgical poem but funkified with square-tone riffs, effervescent horns and high-hat variations percolating in the mix.

Hashkiveinu is far from the more avant-garde albums by ensembles such as the Klezmatics, Happy Beigel Klezmer Orkester or Black Ox Orkestar. This trio's shimmering compositions are neither experimental nor gimmicky. They are the impressive consequence of meticulous songwriting, devout worship and well-balanced harmony, timbre, melody and rhythm.

The sounds of religious exaltation won't be gripping for everyone. But if you're a fan of richly textured music or piyutim, or if it's been a while since you've been to temple, Hashkiveinu may offer you a sonic retreat.

Hashkiveinu is available on all major streaming platforms.