Despite its name, rapid transit almost never has a speedy beginning. A typical new commuter rail system starts with months or years of transportation studies. Consultants' reports, political wrangling, and the securing of state and federal funds follow before any equipment is purchased or any infrastructure built.

But Williston entrepreneur David Blittersdorf, CEO of AllEarth Renewables, is eyeing an express route. Last year, he spent $5 million of his own money to buy a dozen 1950s-era self-propelled rail cars and several truckloads of replacement parts, which are due to arrive as early as this week.

His goal: to create an intercity commuter rail network in Vermont. Potential routes include St. Albans to Montpelier and White River Junction; and Burlington to Rutland.

To date, Blittersdorf has yet to make any formal proposals to the Vermont Agency of Transportation, to the municipalities potentially served or to the railroads whose tracks his cars would occupy. Except for a July 5 press release, Blittersdorf has put little else in writing for public consumption. Said Daniel Delabruere, VTrans' rail program director, "The concept is interesting, but until we know more, we can't take a stance on it ... I still don't know where he wants to go."

Despite a dearth of details, Blittersdorf said last week in an interview that he hopes to get some trains up and running for VIP tours this fall, with regular service commencing as early as spring 2018. For now, the trains will be housed in a St. Albans rail yard where Blittersdorf keeps two other train coaches; spare parts are warehoused in Barre.

One might immediately assume that Blittersdorf has gone around the bend if it weren't for the track record of outside-the-box thinking that has earned him a reputation as Vermont's renewable-energy guru. In 1982, he founded what's now NRG Systems, the Hinesburg company that produces instrumentation for wind- and solar-energy projects. In 2008, Blittersdorf conceived of the initial design for a solar tracker that follows the sun like a sunflower, giving rise to AllEarth Renewables in Williston, where he currently serves as president and CEO.

This time, the engineer and serial entrepreneur is traveling down a different branch of the energy sector — transportation — while acknowledging that it's a big financial gamble. As he joked, "How do you make a small fortune in rail? You start with a large one."

Blittersdorf met with this reporter last week in his Williston office, joined by Charlie Moore, president of the new venture, AllEarth Rail. Moore, 73, spent more than 40 years in the railroad industry before Blittersdorf convinced him to come out of retirement.

"When you have an opportunity to get back into the industry that you love ... doing something that you know is going to make a difference for Vermonters," Moore explained, "it was not a tough decision at all."

Why would a renewable energy expert try his hand at commuter rail? Blittersdorf's office provides clues to his motivation. On one wall, a painting depicts an oil barrel rusting on a beach with offshore wind turbines spinning in the background. Another shows a girl and a polar bear huddled precariously on an iceberg. On the opposite wall hangs Blittersdorf's peak-oil clock. 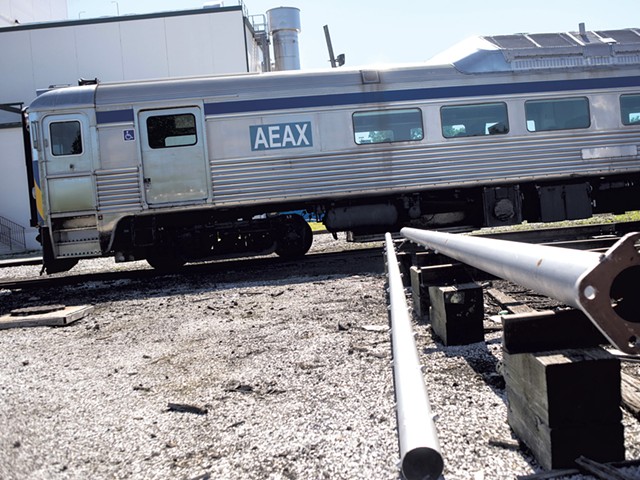 "We can't wait any longer. The world is changing, and the future is in mass transit," he said. "I'm not a big believer that we're going to drive cars for the next 300 years."

The trains Blittersdorf purchased from Dallas Area Rapid Transit don't represent a clean break from fossil fuels, he acknowledged. Built in 1959 by the now-defunct Budd Company of Philadelphia, Pa., these rail diesel cars, or RDCs, are self-propelled —they don't require locomotives. With operator cabs at both ends, they can be driven in either direction. Each one gets about 2.5 miles to the gallon, which is comparable to a city bus but with greater capacity for passengers — 88 seated and another 45 standing.

AllEarth Rail's RDCs served the greater Dallas area from 1996 to 2012. Before that, they were owned by VIA Rail Canada — which, as it happens, tried to buy them back from DART last year but lost to Blittersdorf in a bidding war. The Vermonter said he knew the trains were a solid investment after VIA Rail's mechanics spent days poring over them.

As for how Texas trains would fare in harsh Vermont winters, Blittersdorf and Moore seemed unconcerned. Moore pointed out that these Budd cars have been upgraded with new heating and air-conditioning systems and can plow through six feet of snow.

AllEarth Rail's trains may be ready for the climate of the Green Mountain State, but it's less clear whether they can make the grade financially in an area where passenger rail has long struggled to gain momentum.

Longtime Chittenden County residents will recall the failed Champlain Flyer, the commuter-train experiment that former governor Howard Dean's administration launched to get drivers off Shelburne Road during a major reconstruction project. The train operated from 2000 to 2003, when then-governor Jim Douglas shut it down. Could AllEarth Rail be similarly derailed?

Selden Houghton is assistant vice president of Vermont Railway, which leases the state-owned tracks along Vermont's western corridor where the Champlain Flyer ran — and where a Burlington-to-Rutland commuter line would operate. One of Houghton's first railroad jobs was as an engineer and conductor aboard the Champlain Flyer.

The problem with that train, Houghton noted, wasn't operational but financial: It never gained the critical mass of riders necessary for viability because it ran only between Charlotte and Burlington. Also, the Flyer got up and running before the reconstruction project began to cause major traffic snarls on Route 7 that would motivate commuters to get out of their cars and onto the train.

Still, Houghton wouldn't say whether Vermont Railway will endorse AllEarth Rail's efforts because, he said, he hasn't seen a detailed proposal yet. In an email, a spokesperson for Genesee & Wyoming, which owns the New England Central Railroad running from St. Albans to Montpelier plus a 7.8-mile branch into Burlington, was equally noncommittal.

"There are definitely items that need to be discussed," Houghton said. "The devil is always in the details."

By traditional railroad standards, commuter rail shouldn't be viable in Vermont, given its high cost and the state's low population density. At least that's the conclusion reached by the Montpelier-St. Albans Commuter Rail Service Feasibility Study prepared by VTrans at the legislature's behest. That study, released in February, estimated the total cost for a commuter line at $301 million to $363 million. Those costs included $48 million to build or upgrade six stations and another $162 to $189 million to purchase 30 to 40 passenger cars and up to seven locomotives.

Those estimates made the plan a nonstarter for most lawmakers. But Larry Lewack, executive director of the Burlington-based nonprofit Vermont Rail Action Network, which promotes a revitalization of the state's railways, called the numbers "ridiculous" and "deeply flawed." Lewack claimed that the study's authors never checked in with local stakeholders and based their findings on faulty assumptions.

Notably, Lewack said, the study only considered running full train sets on the Amtrak model, with elevated platforms and indoor stations. By contrast, Blittersdorf intends to have passengers board and disembark at grade, or ground level, requiring fewer and less-costly station improvements. Other infrastructure improvements made since the Champlain Flyer days, including continuously welded rails that allow for a faster and more comfortable ride, would make the trains more attractive to commuters. Lewack opined that Blittersdorf could get his commuter line up and running for one-half to one-third the cost of the VTrans estimates. 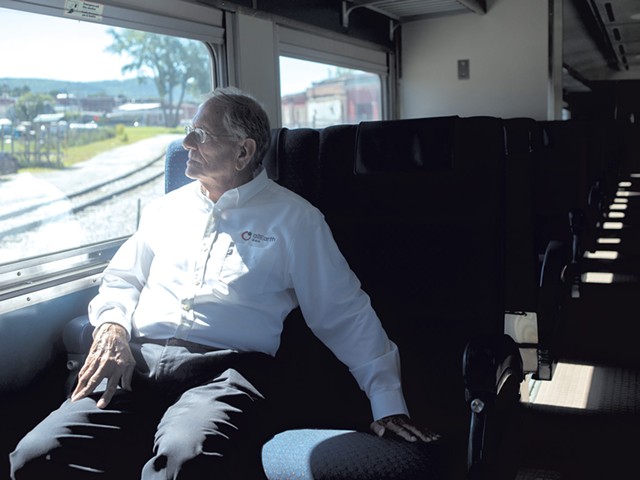 At least one mayor appears ready to climb on board with AllEarth Rail. Last week, Montpelier Mayor John Hollar announced plans to finally break ground on a long-envisioned downtown multimodal transit center at 1 Taylor Street behind Capitol Plaza. Though plans currently include a bus station and bike path, not a train station, Hollar pointed out that tracks already run adjacent to the new center.

Rail featured prominently in the winning design at last year's Sustainable Montpelier 2030 Design Competition aimed at making Montpelier net zero by 2030. Among the ideas of first-place winner "Team Bridges" was to connect a 20-mile corridor of five municipalities — Waterbury, Middlesex, Montpelier, Berlin and Barre City — via rail. Blittersdorf's trains, Hollar said, could be just the ticket to make that happen.

"I've heard about support for rail in Montpelier for years," he added, "so I think [Blittersdorf] would find there's a lot of interest and support in the community."

By their very nature, train stations become economic engines in their own right. A study done by DART several years ago found that every dollar invested in rail stations yielded approximately $7 in new private investment, including housing and commercial development.

In Vermont, Moore pointed out, such development would occur in existing downtowns. Historically, the state's towns and cities were settled along rivers and railroads, with 80 percent of its population living alongside existing rail lines.

Blittersdorf readily acknowledged that he won't get this project rolling without public or private subsidies, or both. To that end, Blittersdorf imagines that some of Vermont's large employers such as the University of Vermont, GlobalFoundries and state government will subsidize the trains in exchange for free transit for their employees.

In the meantime, he and Moore are preparing for the trains' imminent arrival from Dallas and are meeting with railroad executives and state and local officials to nail down the particulars. Though fall may seem like a short deadline for getting the trains rolling through Vermont, Blittersdorf said the Budd cars have all been inspected and fueled and just need their drive shafts reconnected.

Blittersdorf has a failsafe option — to sell his Budd cars back to VIA Rail Canada if he doesn't succeed — but he doesn't think that will be necessary, he said.

"Even though I'm a businessman, I don't expect to make a profit," he said. "I'm willing to risk five million bucks and lose it all, because I can't die with the money. I've got to try and do something good for this state."

The original print version of this article was headlined "Fast Track?"