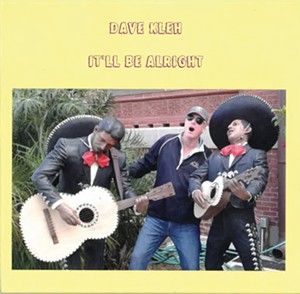 On his 2016 record, Laugh: A Collection of Drinking Songs From the 802, eccentric and somewhat enigmatic singer-songwriter/producer/real estate agent Dave Kleh took a lighthearted approach. The title said it all. He recently dropped his fourth LP in as many years, the much more serious It'll Be Alright. Don't get me wrong, it's another whimsical pastiche of post-punk, new wave and psychedelia. But whatever opinions and hints of politics were lurking under layers of suds on Kleh's last effort now meet the harsh light of the morning after — and he's got one hell of a hangover.

Recurrent elements in Kleh's work include dalliances with both electric and acoustic guitars, giddy percussive panache, a gaggle of synth sounds, half-sung/half-spoken vocals, and a refreshing fearlessness to experiment. It'll Be Alright is all that and more.

Kleh vehemently condemns modern(ish) pop on the trippy opening cut, "All This Crap." The "crap" to which he refers is the stuff heard on commercial radio — from nearly 10 years ago, that is. Kleh shows he's out of touch with contemporary music by name-dropping Miley Cyrus and the Jonas Brothers. (The latter group broke up four years ago, and it's been as long since the "Wrecking Ball" singer dropped a proper album.) He favors the likes of Talking Heads' David Byrne and Steely Dan's Donald Fagen, and he says so explicitly.

"China" is a bouncy vessel for Kleh's frustrations and political paranoia. It opens with a stinging pentatonic scale, playfully acknowledging traditional Chinese musical tonality. The track recalls the despair of America's "Horse With No Name" while delineating mundane slights ("The bartender mixing blender drinks while you're trying to play a song") to deep-seated fears ("Is economic theory all a fallacy or a fact?"). But, above all, Kleh claims the only thing that matters is China — and, we assume, its rising power and global dominance. Whether he's being facetious or stone-cold serious, he comes off like a tinfoil-hat-wearing crackpot.

Though he's likely never listened to chillwave music — only the electro-pop subgenre's 1980s predecessors — Kleh fits right in with early Washed Out and Small Black on "In the Days to Come." Resplendent horns blast through a sea of shimmering synth pads, accentuating the offbeat. The hook recalls the majesty of psychedelic royals Pink Floyd. It's beautiful and may be the songwriter's best work to date.

"Dirty Little Secrets" is a hip-swinging rock song with a slight country tint. Kleh weaves two independent melodies — one guitar, one synth — for an instrumental hook much catchier than the vocal one.

Most of It'll Be Alright expresses dissatisfaction with the status quo. But, as the title suggests, it does end on a hopeful note. If Kleh continues his album-per-year streak, perhaps 2018's offering will balance the gloom with a little more cheer.

It'll Be Alright is available at cdbaby.com. Kleh performs on Saturday, September 30, at SideBar in Burlington.